Here is a description of a Kiev army fighter plane hiding behind a civil airline in order to bomb East Ukraine and cause a response. This video was uploaded June 18, 2014, a month before Malaysian Airlines MH17 crashed in Ukraine. Originally published at http://www.informationclearinghouse.info/article39234.htm Following this video is the detailed report of 21 July from Moscow of a fighter plane close to MH17, and claiming that the United States had satellites that must have provided images that would corroborate the Russian ones, but that the United States is refusing to release these.

The woman in the video does not say she saw the plane; she says that it happened to another plane before M17 and was posted on Youtube a month before M17. Fighter jets can get very close to another plane. B52s flew their first runs in Iraq at low altitude then moved to high altitude out of the range of Iraq's fighter jets and anti aircraft rockets. Their service ceiling was 50,000 ft (15,000 m) much higher than M17 and they continued bombing. They don't need to look out the window to bomb any more.

The commercial airline pilot would not have seen anything if the fighter was behind and below it.

It seems that M17 changed its course twice and finished up over the war zone, while US planes avoided that flight path. The fact that no data has been released from Kiev air control might be an indication that Kiev has been using passenger planes as shields regularly.

On 21 July Moscow released this detailed report of a fighter plane observed close to MH17. They further assert that the United States should have satellite photographs which would confirm this.

The Russian military detected a Ukrainian SU-25 fighter jet gaining height towards the MH17 Boeing on the day of the catastrophe. Kiev must explain why the military jet was tracking the passenger airplane, the Russian Defense Ministry said.

“A Ukraine Air Force military jet was detected gaining
height, it’s distance from the Malaysian Boeing was 3 to
5km,” said the head of the Main Operations Directorate of
the HQ of Russia’s military forces, Lieutenant-General Andrey
Kartopolov speaking at a media conference in Moscow on Monday.

“[We] would like to get an explanation as to why the military
jet was flying along a civil aviation corridor at almost the same
time and at the same level as a passenger plane,” he stated.

“The SU-25 fighter jet can gain an altitude of 10km,
according to its specification,” he added. “It’s
equipped with air-to-air R-60 missiles that can hit a target at a
distance up to 12km, up to 5km for sure.”

The presence of the Ukrainian military jet can be confirmed by
video shots made by the Rostov monitoring center, Kartopolov
stated.

At the moment of the MH17 crash an American satellite was flying
over the area of eastern Ukraine, according to Russia’s Defense
Ministry. It urged the US to publish the space photos and data
captured by it.

“We have space images of certain places where the Ukraine’s
air defense was located in the southeast of the country,”
Kartapolov noted.

The first three shots that were shown by the general are dated
July 14. The images show Buk missile launch systems in about 8km
northwest of the city of Lugansk – a TELAR and two TELs,
according to the military official.


Another image shows a radar station near Donetsk. 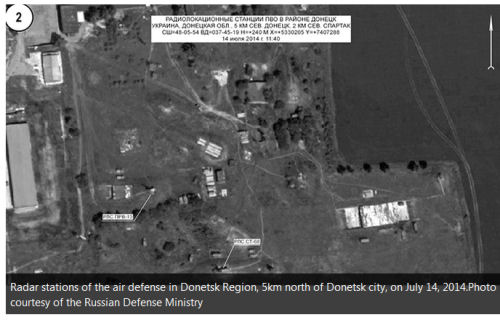 While the third picture shows the location of the air defense
systems near Donetsk, he explained. In particular, one can
clearly see a TELAR launcher and about 60 military and auxiliary
vehicles, tents for vehicles and other structures, he elaborated. 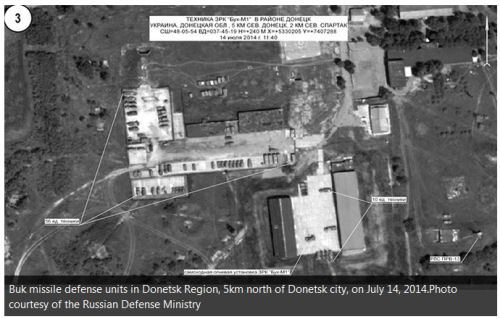 “Images from this area were also made on July 17. One should
notice that the missile launcher is absent [from the scene].
Image number five shows the Buk missile system in the morning of
the same day in the area of settlement Zaroschinskoe – 50km south
of Donetsk and 8km south of Shakhtyorsk," the Kartapolov
said. 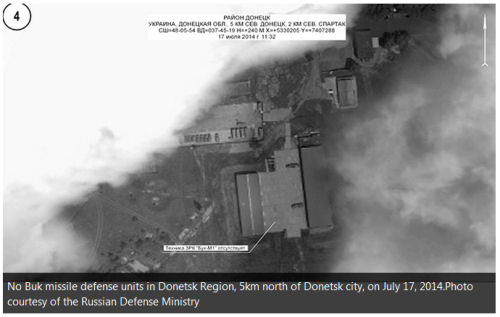 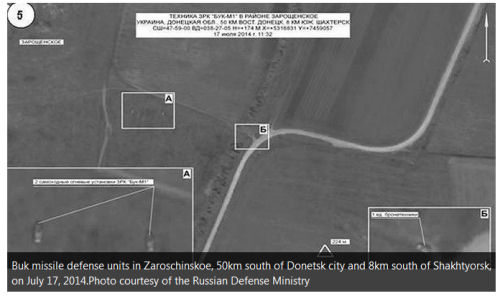 The question that has to be answered is why the missile system
appeared near the area controlled by the local militia forces
shortly before the catastrophe, he stated.

Images taken on July 18 show that the missile systems left the
area of the MH17 crash, the military official said.

Kartapolov also pointed to the fact that on the day of the plane
crash Ukraine’s military increased activity on the part of
Ukraine’s Kupol-M1 9S18 radars, which are part of the Buk system.

In response to Moscow’s evidence, Kiev said on Monday it had
proof the missile that brought down a Malaysian airliner last
week came from Russia.

"There is evidence that the missile which struck the plane
was fired by terrorists, who received arms and specialists from
the Russian Federation," spokesman for Ukraine's Security
Council Andrey Lysenko told a news conference. "To disown
this tragedy, [Russia] are drawing a lot of pictures and maps. We
will explore any photos and other plans produced by the Russian
side."

Ukrainian President Petro Poroshenko said on Monday that Kiev has
“strong evidence” of the causes of the MH17 crash.

Kiev is ready to hand the information to the international
investigation commission, according to the presidential
press-service.