The Royal Commission recommended burns to over 5% of our natural landscape annually have finally been shown to be a waste of time, money and horrifically damaging to our biodiversity.
The recent review (link is external) of the burn targets used 12 criteria to measure how effective the blunt hectare-based target is compared to the proposed risk-reduction target. The hectare burns scored 13/48 (a serious flunk!) while a risk-based target scored 40/48. This is what EEG and thousands of others have been saying since day one. This excellent and informative summary originally published by Environment East Gippsland (EEG) here: http://www.eastgippsland.net.au/news/planned-burns-review-and-recommendations-%E2%80%93-admits-failure-%E2%80%93-plans-for-more-effective-risk See also AWPC fire and wildlife conference for more background. 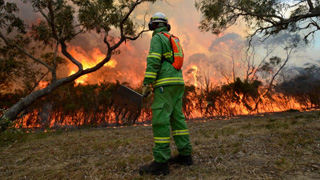 In Feb 2015 Environment Minister, Lisa Neville asked for a review of the 5% burn target and their effectiveness. Tony Pearce, the Inspector General of Emergency Management released this report and recommendations in April/May - a surprisingly quick turnaround time.

It was welcome relief to see the review recommend a shift from just burning, to look at more effective measures to keep people safe and the environment protected. Let’s hope our wildlife and ecosystems can recover after five years of horrendous arson attacks across millions of hectares.
One worrying aspect was the suggestion that it could take another year of the old burning regime before they can implement the new direction of reducing risk rather than reducing our environment. They still need to develop their capability on risk-based planning they say. With a score of 13/48, and maximum environmental damage to boot, maybe they’d be better off to not burn at all until they develop their new program.

What the report said

The Review acknowledges that Rec 56 of the Bushfire Royal Commission just had a broad 5% target policy to burn areas that “are not of equal value”, and that it refers to public land “but remains silent on whether that land is treatable or untreatable”. p2.

In 2013, Neil Comrie the Bushfire Royal Commission Implementation Monitor stated clearly in his report that the 5% target was not achievable, affordable or sustainable. This was repeated in subsequent reports.

The Code of Fire Management has 2 primary objectives – one being to minimise the risk of bushfire and protect human life. The other which has been totally neglected in the last 5 years is:

To maintain or improve the resilience of natural ecosystems and their ability to deliver services such as biodiversity, water, carbon storage and forest products. P 30

How they measure ecosystem resilience is still a question. DELWP don’t have the capacity despite it being a requirement of them to ensure such resilience. It’s still ‘in development’. 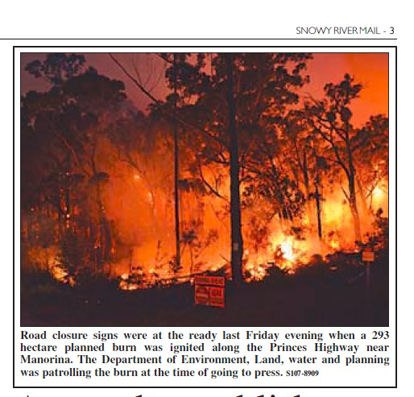 The review stated that a risk based approach was:

After years of convincing the public that leaf litter is a killer, the Department fire managers now have to re-set their messaging to convince a fearful public that they were a bit wrong, and there are now better ways to make communities safer. They mention shared responsibility - with other agencies and by encouraging people to be responsible for their own assets we assume. There is also a welcome acknowledgment of the serious health and economic impacts from burn-off smoke.
They talk of community preparedness, shared responsibility, improved rapid first-strike attack, fire shelters and evacuation. We would also like to see them consider other options such as remote heat sensing cameras installed at key points, enhancing the natural fire resistance of our forests and less financial incentives to keep fires going.

Another welcome sentence was:

...bushfire risk can be reduced through activities other than fuel management, such as land use planning controls, community education, suppression strategies, availability of fire refuges, or evacuations…”

…recommendation 56 (5% burn target)… is only one of many relating to bushfire management.

There was a telling chart which showed the level of planned burns in relation to major bushfire events. There was no correlation that could be drawn between more burns and less bushfires.
Modelling by DELWP estimates that the 5% burn target reduces bushfire risk to people by about 18%, whereas the risk based approach could achieve a 30% risk reduction for the same cost.

The environment gets a look in

The review received 127 written submissions from groups or individuals. Most were very concerned at the devastating impacts the burns policy has had on their local and the wider environment. The policy evaluation which the review carried out showed that under the criteria ‘ensure the resilience of natural ecosystems and their services’, the 5% burn target score ZERO out of four. Under the proposed new approach, it scores three out of four. Not only that, but it is also more effective at keeping people safe and the best return on money spent. A fire safety plan where ecosystem protection scores four out of four would be even better though. 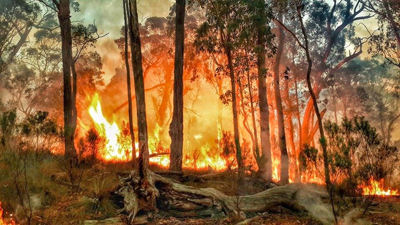 The report also mentions the need to monitor water and air quality in relation to burns. There is a need for more information, reporting, performance measurements and reviews, and in a way that is accessible to the public it says. All this would be conditional on funding and resources of course.
The RMIT was engaged to carry out an independent analysis of the impact on the environment. Under the 5% target it said:

The primacy of the hectares burned target dis-incentivises incorporation of ecosystem resilience considerations… Ecosystem resilience can be actively harmed by large scale burns when they destroy micro-ecosystems and fauna lack alternative habitats within reach. Appendix 4, p11.

Regarding ‘fuel reduction’ it also states that:

Given planned burning is the most effective approach to reducing the fuel hazard over large areas, the practice is likely to remain a significant component of the Bushfire Management Program. p46.

So while it states that there are many tools in the tool box and burning was a costly, relatively ineffective and environmentally destructive tool, it will still be a significant part of annual fire safety measures. This was the worrying sentence within an otherwise refreshing document. The only other criticism is that the review was five years too late. But we thank Lisa Neville for realising that such a rethink was finally needed.

"Set aside by local farmers in the 1950s, the Waratah Bay section of Cape Liptrap Coastal Park has been free of fire for 80 years - regrowing fern gullies on old sand dunes with some very old bush high in the catchments of its myriad creeks. Sheltered from northerly winds the section from Waratah Bay to Bear Gully supports this now isolated bush, which in turn supports lyrebirds, wombats and bandicoots. It has not been the source of any fires for 80 years and it gets wetter as it gets older. It may be that we do not have to burn the bush all the time to be safe - in some cases burning the bush may increase its flammability and dry it out. Best to look before we burn - watch the video and write and ask for more time" writes Owen Roberts, under this video on youtube.

You might also look at articles on candobetter.net about how old forests are wetter and rarely succumb to bushfires (otherwise they would not be old), e.g. in "Responding to incorrect fire information by joining the debate," and the role of coastal trees in creating wind to carry rainfall further inland at "Deforestation drys continents - new theory explains how." 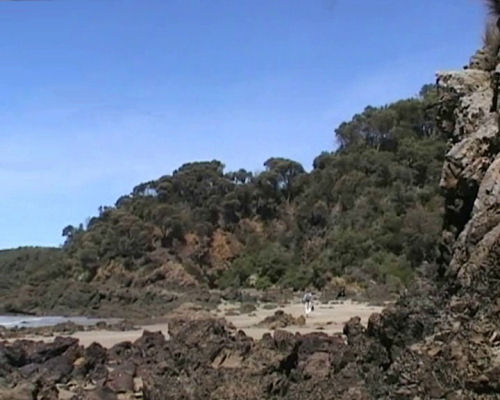 I have known this bushland between Waratah Bay and Bears Gully for something like 55 years. I have never seen it burn. It is a remarkably varied and beautiful piece of coastline, with well vegetated cliffs and meadows leading to large and small coves, each incredibly different from the next. 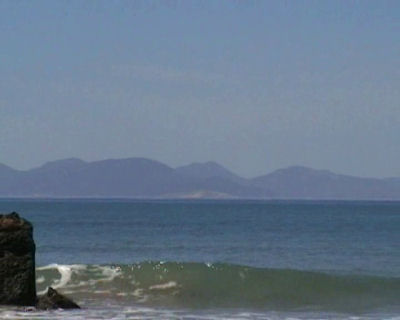 Across transparent water you can see Wilsons Prom in the form of soft purple hills. The sky is nearly always azure. At low tide you can walk to limestone islands and along the beach are jagged reefs with spines like stegosauruses, malachite-green rocks and others with iron-red crevices. Clay-pools with coloured streaks dribble down the cliffs. From beach to beach, the mineral content and the form of the pebbles, rocks and boulders changes frequently and suddenly, a reflection of the ancient upheaval of sedimentary rock. Burning the forest that cloaks this coastline would be a kind of insane pyromania, which is what we have, unfortunately, learned to fear from Victorian governments. 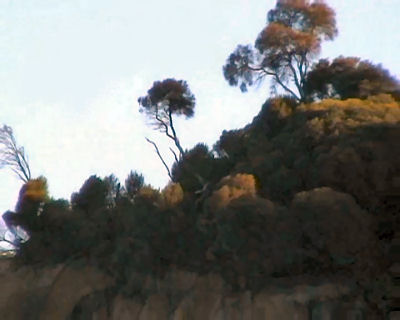 There are probably more sinister motives behind this kind of drive to burn that part of the coast, even if the actual rangers are in the dark: This area is the focus of land speculators. Developers are salivating over it. Already a number of agricultural properties have been turned into housing estates, retirement estates and holiday developments - none of which, incidentally, manage the rabbits - which at least the farmers did.

The developers cannot build where there is good forest, but if the forest burns, they will be able to pick it away at the edges and, in a few years, there won't be any more forest; just suburbs, rabbits, foxes, and erosion all the way down to the cliffs.

I note some blather about mosaic burns helping save wildlife in comments underneath the video featured here. These four articles about the result of planned burns in Wilsons Promontory just across the bay should destroy any faith in the sanity of mosaic burning in this area.

Owen Robert's film here makes excellent points about how mosaic burning and any fires that destroy bushland, kill native animals. Whilst those animals are absent, rabbits and foxes migrate into the vacated areas. Fires are an excellent way to destroy our native ecology. They seem to be a kind of religion that passes for science in that the clearing of fuel by fire ideology is extremely resistant to reason. 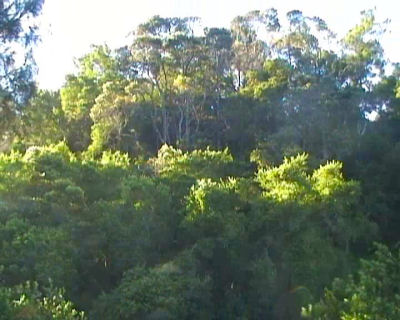 These mosaic fire apologists close their eyes to the fact that old forest rarely burns and burns are easier to control there than in new forests, especially forests which have evolved in response to human-made fires. If the consultants are being paid by government, then you can be sure that they will find a way to recommend fires. It is crazy, but seems to be true.