This story follows on from "The Aussie version of creation" an illustrated story which is circulating widely by email, author unknown. [If you are the author, please let candobetter.net know and they will acknowledge your work.] I copy it here to give the context in which the story of blokes arose, but I have updated the story with changes to conditions in Aussi Paradise. 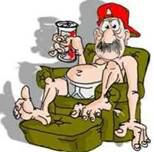 The Aussie verson of creation.

In the beginning God created day and night.
He created day for footy matches,
going to the beach.....

He created night for going prawning,

On the Second Day, God created water....
for surfing,

and BBQ's on the beach,

to provide malt and yeast for beer

and wood for BBQs,

for chops, sausages,
steak and prawns for BBQ's

On the Fifth day God created a Bloke

to go to the footy, enjoy the beach, drink the beer and eat the meat and prawns at BBQ's, and God saw that it was good.

On the Sixth Day God saw that the Bloke was lonely and needed someone to go to the footy, surf, drink beer,

eat and stand around the barbie with.

and God saw that they were good Blokes.

On the Seventh Day God looked around at the twinkling barbie fires,

heard the hiss of opening beer cans and the raucous laughter of all the Blokes. He smelled the aroma of grilled chops and sizzling prawns and
God Saw that it was good .. ...

He saw that the Blokes were too tired to clean up and needed a rest.
So God created Sheilas 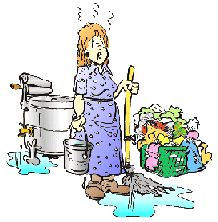 to clean the house, to bear children, to wash, to cook and to clean the Barbie, and then God saw that it was not just good....

It was Bloody Awesome!

The Story of blokes, continued - by Quark

And that was pretty good for a while for most blokes and the sheilas didn’t mind it much either. They used to quite like BBQs in the back yard as it saved on washing up and the blokes did most of the work anyway. But as time went on, the back yards disappeared and so, fewer blokes could have BBQs with their mates and sheilas.

The blokes who couldn’t have bar-b q-s became quite aggro as they felt cooped up which is natural as they had been created as BBQ loving creatures.

The other thing that changed was that the sheilas could no longer spend all their time looking after children, cooking, cleaning "barbies" etc. as they had to go to work to help pay off the mortgage on the apartments sans backyards. 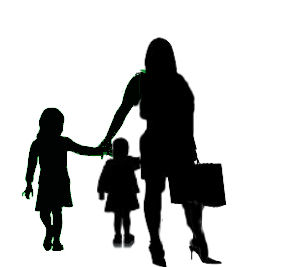 This, they were told by the newspapers,

was the way it was going to be for all blokes eventually in Australi-bloody –a and that they could no longer expect to have back yards with "barbies".

This cut to the quick of blokes lives and affected their mental and physical health. Whilst blokes always had beer guts, they were starting to have more than that and to be actually obese 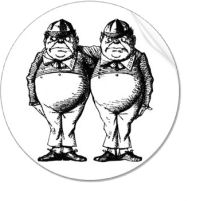 from all the fast food they had to eat on account of the sheilas no longer having time to cook.

The other problem for blokes was that whilst they used to love going to the footy, they also liked to kick a footy around with their mates. This became harder as the local footy grounds and playing fields disappeared under masses of town houses.

The blokes became quite sad but they did not know quite what they were sad about as they still had their beer even though the barbies had gone.

The blokes had really enjoyed surfing, swimming and fishing as the sea and rivers had been created for this purpose. But around the same time as the back yards disappeared the blokes started to have trouble parking their utes at the beach.

A whole lot of signs started appearing at their favourite places saying they only had two hours for a day of surfing and swimming and, what’s more, they had to pay for the privilege! 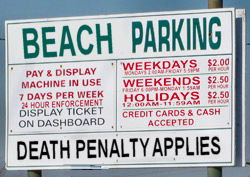 This made the blokes furious because they used to be free to do what they bloody well liked in Australi-bloody –a.

Then these blokes got older and got a bit used to not getting their own way. They started reminiscing with their mates instead of trying to do all these blokey things. A new lot of blokes cropped up who never knew that you could have a day at the beach and not have to worry about parking.

which were not created by God, unlike the sea and the plants for the malt and the yeast for the beer and the sheilas and the crustaceans.

And the other bloody fly in the ointment for the blokes was that, whilst they used to have plenty of time for surfing and swimming and fishing after work and on their “sickies”, most of these blokes, one by one, lost their bloody public service jobs or permanent sort of cushy jobs even in the private sector and had to go onto contracts.

This bloody meant that they were even working when they weren’t being paid in the time that they would have been surfing and swimming! What’s more they didn’t get “sickies” or if they did they didn’t have time to take them or they’d lose their jobs!

The blokes who virtually had owned the bloody place no longer seemed to! It was as though the place that had belonged to all blokes to enjoy and do as they bloody well pleased now belonged to a few blokes that they didn’t even know and who seemed to live in castles somewhere and even had houses overseas or owned whole islands.

Meanwhile what was happening to the sheilas? Well the sheilas never thought they owned the place unless they were rich sheilas, but that didn’t matter because the sheilas could go where they pleased and it was as good as owning the joint. So when the backyards disappeared around the same time as the parking signs went up at the beach and the blokes lost their cushy jobs with ‘sickies”, the sheilas who had got equal pay to the blokes a few decades earlier also lost their cushy jobs with “sickies” and found themselves on contracts.

Just as the blokes were stuck at work when they could have gone swimming, so were the sheilas. The sheilas still had to have the babies but other sheilas were hired to look after lots of babies while the sheilas who had the babies went to work to pay the mortgage for the apartment or the house with not even enough land for a BBQ.

The blokes and the sheilas had to race to the child care centre before and after work to drop off and pick up the babies. Life for both blokes and sheilas became a balancing act to maintain a life without BBQs, surfing and swimming.

But most blokes and sheilas were very appreciative of the large flat screen teles that were the centerpieces of all living rooms in Australi-bloody- a. 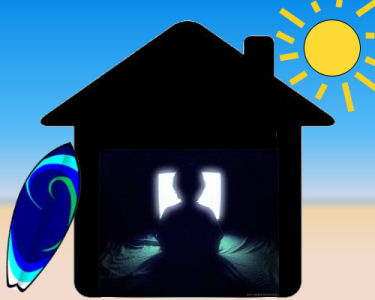 It had all happened so insidiously, the blokes didn’t realise. And that’s the story of blokes.