Conservation groups seeking boycotts of products linked to alleged poor environmental practices may soon be liable for prosecution under consumer law. The move, which could severely hamper market-based campaigns by groups such as Markets for Change and GetUp!, is to be pursued by the Abbott government.

Parliamentary secretary for agriculture Richard Colbeck told The Australian the move would prevent green groups from holding companies to “ransom” in their markets. In other words, they don't want non-monetary and intrinsic values to get in the way of business profits!

Colbeck said that the government might ban consumer and environmental activists from launching secondary boycotts.

A primary boycott is targeted directly at a company which has done something offensive. Don't like how a biscuit manufacturer operates, so you and your friends stop buying their biscuits? That's a primary boycott.

By contrast, a secondary boycott targets the biscuit company's suppliers and consumers. The aim is to punish the offending company by punishing those who the company relies upon.

Section 45D of the act prevents action to hinder or prevent a third person supplying goods to, or buying them from, another person. The law restrains business from unfair dealings and trade unions from dragging third parties into industrial disputes via sympathy strikes or trade boycotts. However, section 45DA exempts people from the secondary boycott provisions if their actions are "substantially related to environmental or consumer protection".

What’s prohibited by the Competition and Consumer Act is quite broad. Two or more people cannot engage in conduct that hinders or prevents trade between two other people, if it is meant to or would likely hurt that business. What this usually means is you can’t organise sympathy or supplier strikes or boycotts where a union or a company are having a squabble with another company, and boycott their adversary’s supplier.  Environmental boycotts fit into the broad definition of secondary boycotts, even though they don’t really act like companies or unions. The Coalition is flagging that it wants to get rid of that exemption.

The tactic has been used successfully in Australia and in Japan to pressure timber companies such as Gunns and Ta Ann to shift out of contentious forest areas and to adopt top-flight green certification.

The Australian: companies to get protection from activists boycotts

The Australian NGOs most heavily involved in inciting secondary eco-boycotts are Greenpeace, the Wilderness Society, Markets for Change, and GetUp! The most active of these is Markets for Change (MFC) which was launched in 2010 under the direction of former Wilderness Society National Forests Campaigner, Tim Birch, and with four international Greenpeace operatives occupying positions on its Board.

The group Markets for Change says it will not be gagged. The group investigates and exposes companies which is accuses of driving environmental destruction.

Colin McCulloch from the Forest Contractors Association says legislative change is needed. Mr McCulloch agrees with the Liberals description of the environmental activity as economic sabotage, saying the moment for free speech has "well passed."

But under proposed revisions of the Consumer and Competition Act, GetUp! might soon be breaking the law if it exposes that meat is from horse abattoir rather than a factory farm! Law is the rule book controlled by the state, and the state is now run by a Coalition who acts in the best interests of the money-making conglomerates that control Australia’s GDP and economic standing.

Our only ability to stop markets from producing dirty energy, or selling meat from factory farms, is to stop giving money to those companies. A ‘boycott’ is how a society lets a company know that we no longer accept that houses should be built out of asbestos.

Simply encouraging other to write letters or send postcards to a company urging them to take corrective action where they may be associated with criminal activities may be illegal.   Such examples could be when companies and sourcing goods produced with slavery, forced labour, debt bondage and human trafficking in their production.   Offences such as bribery, money laundering and tax evasion are common in illegal logging operations.

For example, the secondary boycott provisions of the Competition and Consumer Act 2010 were invoked by wool growers in connection with the threatened boycott of Australian wool products by People for the Ethical Treatment of Animals.

The support for the Act comes for those concerned about groups targeting the customers of timber and agricultural products in campaigns against old-growth logging and live-animal exports. 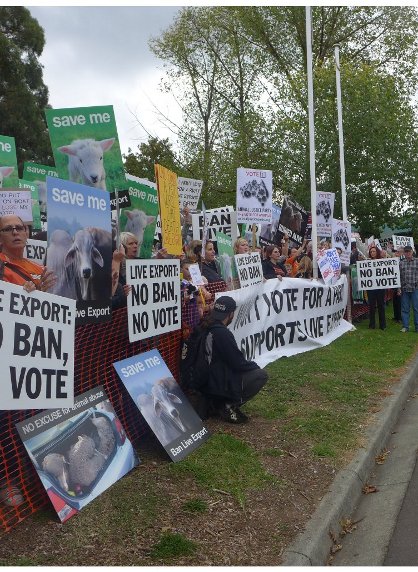 Federal Council of the Nationals calls on the Federal Government to strengthen the Competition and Consumer Act 2010 , and related regulations, to increase the bargaining position of dairy farmers and egg producers relative to the major supermarkets, by adding an “effects” test to the misuse of market power provision (section 46); and supporting the creation of a supermarket code of conduct applying to supermarkets and their purchase of dairy and egg products.

Tasmanian Greens leader Nick McKim said the proposal was both unworkable and unacceptable and activist groups had the right to provide information to allow consumers to make informed choices.

The noose is tightening around what's intrinsic to holding onto our values with regards to our natural heritage, animals, and human rights. With more industries being under the heavy control of powerful an gigantic corporations, governments are increasingly under their beck and call to clamp down on “obstructions” from activists.