If I were an aboriginal in West Australia, I would be buying up camels and organizing my clan to develop them as transport, food and materials in a revival of a new style Aboriginal society, which might take in some, but definitely not all, of the refugees from Perth’s collapsing civilization only decades from now. Submissions invited from public on planning doc. (Link inside article)

Picture: The future for some Australians?

West Australian government planners are facilitating perilously high population growth in Western Australia today, with citizens’ survival casually hoisted on unlikely discoveries of ways to replace fossil fuels. They are dishonestly marketing as inevitable a future where West Australians would mostly have to work harder and harder for less and less, spending all their salaries on food, power, rent and desalinated water and living in highrises.

"A West Australian living in 2050 will pay much more for housing, groceries and amenities. The availability of land, food security and dwindling water supplies will be the challenges of the generation." [3]

Shockingly, the government is behind the very problems that it is pretending to respond to. Their projections go forty years into the future in the State Planning Strategy (Draft) - 2012.

You can download the Planning document chapters here at http://www.planning.wa.gov.au/publications/6561.aspx. The title of the draft is "State Planning Strategy (Draft) - 2012." The good news is that this draft document is quite short and easy to read with some colorful and overly simplified maps. It is interesting to see the appalling level of superficiality of some policy and planning statements, such as those about social infrastructure. Public consultation is invited until 29 March 2013. You can use a "Have your say submission form" There is also a phone number for contact: 08 6551 9000. You can also email a submission to [email protected] or send it by mail to
Project Manager
State Planning Strategy
Department of Planning
Locked Bag 2506
Perth WA 6001

A society of slaves, doomed to collapse

We seem to be witnessing the creation of a society of slaves, a worse event than the initial British invasion.

Unless the government planned scenario is prevented, land will fall into the hands of unregulated corporations and most people will not have any land to supplement their diets with their own produce and relieve the pressure on them to work and commute until they die. Imagine the state of the hospitals with even more people with fewer rights and less disposable income. It is unlikely, however, that the present economy with its network of production and employment will even last that long. Those most likely to survive will be people who own and have managed to conserve some form of power, water and food production from desert encroachment.

Preventing farms and the entire coast of Western Australia, which is the only green part, from turning to desert will be the ‘challenge’. Of course the elderly of West Australia can recognise it as a tragedy and the current generation will know it as a battle for survival among neighbours who are mostly strangers in a society poorly organized to replicate the Saudi experience without the oil.

Gas comes out of the ground very quickly, unlike oil, and natural gas production will be in decline,[1] much of it already having been burned up in foreign lands. The West Australian planning document just released [3] admits as much in its empty claim that


"Climate change will, however, boost renewable energies which will supply about a third of the State's power by 2050 while fossil fuels and coal diminish in significance."

In the current global economic model, short-term ongoing growth in mineral production will only fuel this slave society; there will be little sharing of wealth and leisure. As we know West Australian mining magnate, media ambitious Gina Rinehart, seems to consider $2.00 a day to be adequate commercial reward for toil in Africa and a model for the Australian economy. She is not Robinson Crusoe in mining society. With that kind of commercial and social philosophy dominating the West Australian economic paradigm, what is to stop West Australia from becoming like Nigeria, its people landless and oppressed by corporate government backed by foreign mining interests and private armies? West Australia Inc. [2] may seem a mere cockroach infestation compared to the locust plague in store. 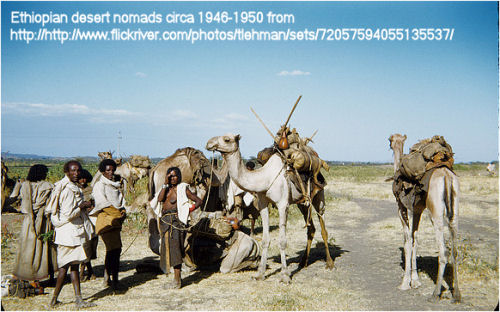 Ethiopian desert nomads half way through last century. Not such a bad way to live, especially in a stable population.

It is probable that the wild camels now considered a nuisance, will become desired means of transport, food and materials for people unable to live within the reduced function of the city. We are looking at the possible rise of a desert nomad society, similar to that of the aborigines, but riding camels and preserving some long lasting technologies.

If I were an aboriginal in West Australia, I would be buying up camels and organizing my clan to develop them as transport, food and materials in a revival of a new style Aboriginal society, which might take in some, but definitely not all, of the refugees from Perth’s collapsing civilization. (We know that the camel transport system will work in Australia because colonisation of these areas actually initially relied on camels.)

Extrapolating from present rates of population growth, according to planner John Day, the city of Perth would grow from nearly 2 million now to five million within 40 years.[3] Of course the economic system that encourages this population growth and sustains the current population will probably collapse well within the 40 year period. Even the current government is admitting that the stresses are immense.[2b] 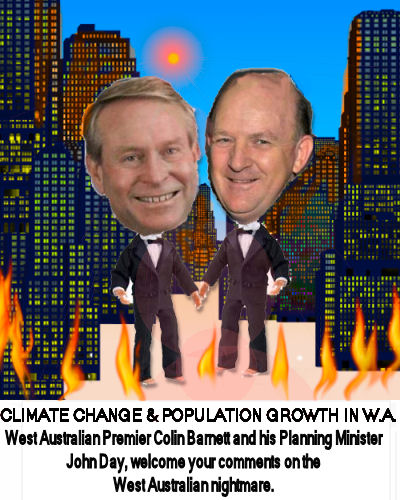 West Australian Planning Minister John Day excuses this terrible outcome as due to climate change and globalization.[3] It is clear that the government of the day, led by Premier Colin Barnett, which gives this kind of planning license, has no intention of trying to protect its citizens by increasing their democracy so that they can resist the disabling population growth. It is all top down government and authoritarian imposition of high migration and infrastructure expansion on an increasingly unreliable natural resources base.

Democracy cannot withstand this social engineering which drives physical wedges between neighbours and kin with infilling and the creation of entirely new suburbs overnight, purchased and populated in advance by future overseas migrants ignorant and careless of their impact on the society they are treating as their host.

The shortages of water are expected to become permanently in crisis due to climate change and the desertification that the current population has caused through the removal of vegetation and water diversion.

Future generations, if they could speak now, would probably put the West Australian government and its planners on trial for crimes against humanity and nature. If only they had the power to do so now, we could hope they would lock them up.

There is another way

Another way of dealing with climate change and energy crisis that would bear more hope for survival and society would be to reduce the risks of certain overshoot by cutting immigration right back in West Australia by ceasing to grant any new building permits, ceasing to advertise for new immigrants, and by slowing down extractive processes in mining through the imposition of taxes incremental above a certain level of production. Then cut down all work and production by halving the working day, but boost democracy by sharing that work around. If a target of halving production and population growth were met then Western Australians would have twice the time to adapt to their changing climate and environmental circumstances, and, in the longer term, to a far smaller and more conservative and closely knit society adapted to the use of flow energies and the biology of the region. This could be a beautiful and long lasting society. The cost increases for water, power and food would gradually decrease as the population decreased and human activity, currently manically driven by bubble finances, relented to a sane rhythm. [4]

If you think this other way is eccentrically drastic, do consider how we have gone from a free and pleasant society in West Australia to finding ourselves in a position where mere planners are actually telling us we will be forced to lives of poverty and toil for less and less return.

The government is causing and exacerbating of the very problems that it is pretending to respond to: population growth, massively polluting rates of fossil-fuel extraction, housing shortages, food shortages and water shortages, but the planning document in question encourages the misleading perception that it is only responding to something inevitable: "It is not so much a bleak future as it is the reality of living in an era characterised by climate change, population growth and unprecedented global economic transition."[3]

Sheila Newman has also just published a new theory of population and political organisation, which is coming out in four volumes. The first volume is called, Demography, Territory and Law: The Rules of Animal and Human Populations, Countershock Press, December 2012.

Why is anyone putting up with this and why does the West Australian report such prognostics as if they were anything but an invitation to overthrow the government? Well, that is of course a rhetorical question because the Australian media and the government are interdependent and responsible for the way things are presented as fait accompli when, if the rest of us just talked to each other instead of relying on a media invested in mining and land speculation, we would know that almost none of us want this engineered future and that we would do anything to avoid it.

[1] See for instance trend-based predictions in 2005 here: http://www.theoildrum.com/story/2006/11/27/61031/618 It is basically the same story as for oil except that gas is supposed to replace depleting oil production and promote more growth. Extraction of shale gas carries terrible costs to water and natural resources and ammenity, destroying democracy in the process and will increase the nightmare proportions of the problem of energy resource depletion and associated pollution. See also Sheila Newman,(Ed.) The Final Energy Crisis, Pluto Press, UK, 2008, Chapter 2: "101 Views from Hubbert's Peak" which documents trends in oil substitution by gas from the 1960s, or, a more up to date graph can be found in Sheila Newman, Demography, Territory and Law: The Rules of Animal and Human Populations, Countershock Press, 2012 in the introduction (dated 2012).
[2] See Trevor Sykes,The Bold Riders: Behind Australia's corporate collapses, Allen & Unwin, 1996 (2nd ed.)