On 11/12/2012 newspapers reported that Sandra Kanck, last Australian Democrat to leave parliament, now president of Sustainable Population Australia, had been 'expelled' from the Democrats by John Davey, a professional migration agent, in the role of "Democrats National Executive spokesman." Davey is reported to have said that "the decision was made as a "last resort" after Ms Kanck refused 'repeated requests to put appropriate distance between her activities amongst other special interest groups and the Democrats'". Senior Deputy National President Darren Churchill defended Kanck, saying that a group of seven people had attempted to take control of the party and was "removing anyone who stands up to them". It seems incredible, but is this also the same John Davey of the Democrats whom in 2002 Crikey.com referred to as a "former porn lobbyist" and "Director of the Eros Foundation, the lobbying group for various naughty interests" in "The power behind Brian Greig’s throne [in the Australian Democrats]"? 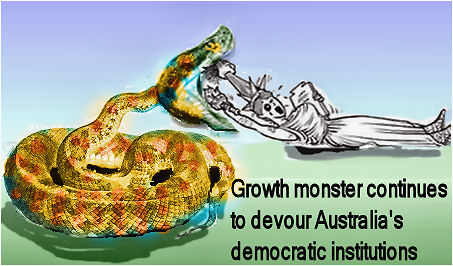 The Australian Democrats used to have a population policy in favour of a small population in Australia for ecological reasons. Under Democrat John Coulter's presidency a bitter battle was fought to preserve this position. Tension developed as immigrationist members gained some traction through fair and foul means and continually tried to break up the policy, purportedly wearing down the mainstream membership.

During Cheryl Kernot's leadership, the profile of the party became so strong that it looked to some as if Cheryl might actually eventually become prime minister. At the same time she began to downplay the population policy. Then, to the shock of many Australians, overnight Kernot left her own party and joined the ALP. It seemed to some as if she for some reason failed to take seriously her own success and had been seduced by inaccurate promises of a stronger rise to power via the ALP. Instead she fell into almost total obscurity, and it looked to many as if she had been pushed.

Gradually the Party seemed to be pulled apart, finishing up with Andrew Bartlett, an immigrationist at its head. It was now hardly recognisable as itself and hardly registered on the voting radar. Bartlett was also an extreme advocate for non-detention of asylum seekers. Losing his Queensland seat in the last Federal election, Bartlett ran in the 2009 election for the [immigrationist] Greens. Not succeeding there, he became a research fellow in Migration Law at the College of Law, Australian National University.

Sandra Kanck was an Australian Democrats member of the South Australian Legislative Council from 1993-2009, after which she became president of Sustainable Population Australia, a group that wants a small population for Australia. Australia in the grip of a population growth lobby with extremely high immigration and awards bonuses to women who have babies. Kanck is also involved in numerous other causes.

Countering John Davey's claim to authority in the Democrats is Darren Churchill, who holds the title of Senior Deputy National President of the Democrats. He says that Ms Kanck has not been expelled at all and that Mr Davey does not have the power to expell her. Churchill reportedly said a group of seven people had attempted to take control of the party and was "removing anyone who stands up to them".

"...Mr Churchill said the group headed by Mr Davey had proclaimed itself to be running the Democrats and had set about passing a series of unconstitutional motions to expel or suspend anyone who did not fit into their agenda." ..."(Mr) Davey is not a spokesperson for the party - he has not been approved by our proper procedures and processes."

Deputy National President, Darren Churchill has said that the "only constitutionally authorised person to speak to the media on national executive matters is the national president." According to him there is an upcoming election for a new president, and, until someone is elected in that role, the Deputy National President has assumed the role of party spokesman. (Source: http://www.dailytelegraph.com.au/news/breaking-news/kanck-still-a-democrat-party-official/story-e6freuz0-1226534655857)

In a story taken from Adelaide Now Mr Davey was reported in the Australian to have said:

"The most important principle we hold as Australian Democrats is to be beholden to no group or groups in the community."

Mr Davey himself is the Principal Solicitor and Registered Migration Agent for Hermes Legal and Migration Services, which also advertises that it has a network of professional teachers and tutors who can assist in the preparation for the International English Language Testing System (“IELTS”) and that it is currently taking enrollments for classes in Adelaide, Melbourne and Canberra. "Class sizes are limited to 10 and pre-booking is essential. Classes last for 3.5 hours (with a 20 minute break in between) and cost $77.00 each inclusive of GST." http://www.hermlegal.com.au/index.php/our-services

Below are some more details:

Australian political parties have been stalked by the commercial population growth lobby now for years. (See Sheila Newman The Growth Lobby and its absence in Australia and France, Chapter 6, for the history: http://candobetter.wikispaces.com/file/view/GrowthLobbyAndAbsence-Newman-2002.pdf (wikispace deactivated -have asked to reactivate - Ed, 21 Oct 14) and http://adt.lib.swin.edu.au/public/adt-VSWT20060710.144805/index.html.) There are many examples of the devastating effect this march has had on our democracy. (See http://candobetter.net/GrowthLobby.) This process has contaminated the mainstream media as well as the commercial media, and it seems to have utterly infected the Australian Labor Party and the Liberals in every State. The Greens also seem to have been fatally weakened by it, and the Australian Democrats continue to be torn apart by it. The power of the Australian Multicultural Foundation, working with the Australian Academy of Technical Sciences and Engineering (ATSE), the Scanlon Foundation (formerly the Brencorp Foundation) and the Institute of Global Movements is quite frightening (see: http://candobetter.net/node/1928 ) as is the power, financial and media reach [See http://candobetter.net/taxonomy/term/705 and http://candobetter.net/taxonomy/term/249 ] of the Property Council of Australia and APop.

Read about a new population theory in Demography, Territory & Law: The Rules of Animal and Human Populations (see link). Forensic biologist, Hans Brunner writes of it: "This book takes us to a completely new paradigm in multiple species population science. It shows how little we understand, and how much we need to know, of the sexual reactions when closed colonies with an orderly reproduction system are destroyed, be it people or animals." Two chapters are on multi-species demography, the rest apply the theory to non-industrial societies and the author comes up with a completely new test for the collapse model of Easter Island, which will stun those who thought they knew all about it.