The Green Wedges Coalition explains how Planning Minister Matthew Guy wants to turn 6000ha of Melbourne's green wedges over to development. The Liberal Government has a majority of one in parliament and this green wedges destruction is a foregone conclusion if the Libs all vote to support Matthew. CDB Editor says: Ask your government representative what he or she intends to do to prevent this abrogation of democracy and this insult to our natural environment and the wildlife it shelters. Let us know their answer. If you read this after the voting, then ask your MP what he voted for. You can look it up on Hansard too. Addition: The “Logical Inclusions” (6000 ha excised from the green wedges, taking habitat wetlands etc.) was passed by Parliament on 14/8. The new threat to Green Wedges – may be even worse as it affects the non-growth councils like MPSC as well as the growth councils – is the proposed changes to the zones which would allow a lot of urban uses into the Green Wedges.

In the latest assault on Melbourne’s green wedges, Planning Minister Matthew Guy plans to take another 6000 ha from the green wedges to give Melbourne more urban sprawl and to concrete over more fertile farmland and environmentally significant wetlands, grasslands and woodlands. This is subject to a vote in Parliament which will bring huge unearned windfall profits to landholders, developers and their lobbyists, including Liberal party donors and fund-raisers: an estimated $500 million for one 103 ha property (see the Age Liberal-donors-win-big-from-rezoning; Coalition policy is for another Urban Growth Boundary Review (UGB) review is due in two years, about the time of the next election. 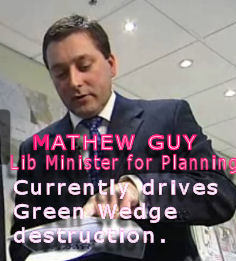 This latest Green Wedge land grab will create continuing uncertainty around the Urban Growth Boundary by proposing 14 areas to be excised from the green wedges for urban growth and recommending a further 16 areas for “possible future review.” This signals that Melbourne will go on sprawling for as long as the Coalition Government stays in office. A further 20 green wedge areas were ruled out for urban development.

Overwhelming majority of Victorians are against this

This latest green wedge land grab is particularly deplorable as it is not based on any demonstrated need for more development land. The Growth Areas Authority recently estimated that the Growth Corridor Plans (for the 43,600 ha of land rezoned in 2010) would provide 20 to 50 years’ land supply for the continued urban sprawl which most of us don’t want. Every representative survey conducted, from Manningham’s in 2002 to Kingston’s in 2011, finds overwhelming majorities want green wedges protected for environmental conservation, agriculture, parklands, landscape value and recreation.

It appears to breach federal requirements that environmental strategies to protect endangered species including Southern Brown Bandicoot, Growling Grass Frog and Golden Sun Moth must be finalised first and that urban development plans must work around them. None of these environmental strategies have been finalised and the SBB strategy has been postponed for six months. Meanwhile land that spans a proposed bandicoot habitat corridor in Casey has been approved for excision from the green wedge. See VNPA media release.

What is Mathew Guy in parliament for if not to listen to the electorate? That is the question.

We are calling on Matthew Guy to listen to communities, abandon plans for illogical incursions and return to policies to protect the green wedges. This may disappoint the developers and property consultants, but will please everyone else.