The government needs to listen to the electorate. Consecutive public community polls have shown that Australians are very concerned about the ongoing rapid rate of population growth and density of development, food security, and social disorganisation in poorly serviced new suburbs. 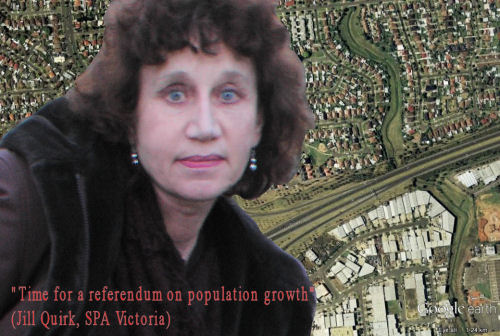 Public should have last word on urban expansion and population growth.

Today, 20 June 2012, Jill Quirk, President of the Victorian and Tasmanian branches of Sustainable Population Australia (SPA), said that the public should not only 'have their say' on urban expansion and population growth, but they should be listened to and heeded.

She strongly criticised the Baillieu government’s move to further extend the urban growth boundary around Melbourne.

In addition, she pointed out that consecutive public community polls have shown that people are very concerned about the ongoing rapid rate of population growth and density of development that is causing traffic congestion, crowded public transport and environmental pollution in Victoria.

“Extending urban growth further into green wedge is not the solution” she said “as it is creating unsustainable communities without adequate infrastructure and services, heavily dependent on motorised transport. There are also food security concerns as more and more food-growing land is being lost under concrete construction and roads.”


“Planning Minister Mathew Guy has failed to act for future sustainability and instead has responded to pressure from property developers and land-banking speculators who are the drivers of high population growth”.

The history of Victoria's began with historically well-planned open and natural space, in contrast to the cramped living conditions of overpopulated Britain. In recent years large swathes of public land have been sold off and truncated, with Melbourne's Royal Park among the most notable. Green wedges were identified for protection broadly following rivers in Melbourne, but these are being ripped into by government supported developers in defiance of public opinion.

“Earlier governments strongly endorsed the preservation of green wedge areas beyond Melbourne’s fringe as essential for healthy communities” President Quirk said “ but we are now losing those areas to the detriment of future generations who will be left with just ribbon suburbs.

We firmly believe it is time for a referendum on population growth.”