Measures are now in front of parliament to allow logging contracts to be signed up to 20 years and give the state-owned timber company VicForests more control over when and where to log.

The Leadbeater's Possum is a nationally threatened species.  II has been estimated that as few as 1,500 of these possums are left in the world.

Like Lemmings jumping off the cliff towards deliberate mass suicide when their populations explode, VicForests are programmed for destruction. 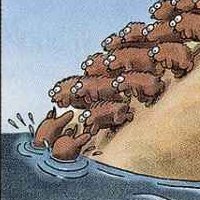 The Age: Is it too little and too late to save the leadbeaters possum

Ironically, the future of endangered Leadbeater's possum in hands of new government taskforce headed by Association of Forest Industries and Zoos Victoria. This does not sound like an independent or promising compromise. It puts the future of the threatened Leadbeaters Possums not in the hands of conservationists, but the industry that wants to wipe them out by destroying their homes – Victoria's Central Highlands Mountain Ash forests. It's like giving the Fox the responsibility of “caring” for the chickens!

It's been criticized as yet another committee when there is already a scientific recovery team dedicated to saving it. Any captive breeding programs to increase the numbers would mean they inevitably would be condemned to being permanently captivity unless there was viable habitats – old growth forests that take up to 100 years to grow and create holes for their homes.

The Age: Loggers to help save possums

It's an oxymoron, an alliance that's hard to give credibility to, considering their interests in anhilating the mammals to pave the way to access more timber for logging!

The Leadbeater's Possum is a nationally threatened species.  It has been estimated that as few as 1,500 of these possums are left in the world.  In 2009, around half of their habitat and their population was wiped out by the bushfire inferno that swept through Victoria.  The remaining Possums live in Victoria's Central Highlands forests,. but is one of the areas where logging is carried out by Victoria's State logging agency, VicForests.

In 2011, MyEnvironment brought proceedings in the Victorian Supreme Court seeking orders that VicForests be prevented from logging three coupes in Toolangi, near Healesville. The hearing, the leading expert on Leadbeater's Possum, Professor David Lindemayer, gave evidence that the coupes concerned were habitat for the Possum.

The Court ultimately found that the legal prescriptions in place did not protect the Toolangi coupes, and VicForests was permitted to chop them down.

Recently, Leadbeater experts have taken the extraordinary step of coming forward to warn that the Leadbeater Possum faces a very real threat of extinction in the near future, a threat which is increased by logging.

In a letter published in the journal Science, two conservation scientists have accused the Victorian Government of taking calculated actions to substantially reduce the viability of the endangered species.

One of the scientists, Australian National University ecologist Professor Lindenmayer, has studied the Leadbeater's possum and its habitat for more than 30 years.

Professors David Lindenmayer and Hugh Possingham say, "Government-sanctioned legal logging of the reserve system will significantly increase the chance of extinction of Leadbeater's possum. To the best of our knowledge, and despite state and national threatened species legislation, this is the first time an Australian government has taken calculated actions to substantially reduce the viability of an IUCN-listed endangered species with full knowledge of the likely consequences."

Actually it's not the only case of government taking calculated action towards increasing the threats to already threatened species. Agriculture, industries, infrastructure and urban sprawl are continually pushing threatened species towards extinction through habitat loss, pollution and destruction. The aim of perpetual economic-growth means whittling away our natural resources and heritage, and can't be sustained. It's incremental consumption and destruction of living ecological systems means that the threats our fauna and fauna, and even world heritage areas, are never safe from developments and industries.

Victoria's state-owned timber company will reduce logging by 25 per cent in the bushfire-ravaged mountain ash forests of the central highlands – but will wait until mid-2017 to make the shift.

VicForests' director of corporate affairs, Nathan Trushell, said the move, to reduce logging by 25% in the Central highlands, would result in the loss of up to 200 jobs. The decision to wait until 2017 to reduce logging had been made to allow the broader industry time to adjust, Mr Trushell said. Ironically, VicForests will continue their destruction even to the point that their own industry will be forced to face “extinction” in the future.

Jobs are temporary anyway, but our environment and living species live in the long term. People can retrain and relocate, but not threatened communities.

Victorian forests in the hands of the Victorian government means that our forests are under threat from their vested interests in VicForests' timber profits. That a threatened species will be deliberately driven to extinction means that the Flora and Fauna Guarantee Act is pure political spin of no substance.

There's no "balance" between the social, economic and environmental of logging native forests - as VicForests claim. They are being logged faster than old growth forests can recover. There's no social benefits either if heritage native forests are destroyed, historic central highland communities are devastated, and Victoria's faunal emblem ends up joining other extinct species on museum shelves. Ironically, they have come to the end of the line with regards to economic benefits too if VicForests are logging Victoria's sawlog forests out of existence.

Like Lemmings jumping off the cliff towards deliberate mass suicide when their populations explode, VicForests are programmed for destruction. Despite a small concession, they will continue their logging vandalism, consuming the homes of iconic native species, destroying important rain-catchment areas, even if their activities are to their own detriment by making their own industry "extinct"!

Unfortunately our government's enthusiasm of ensuring “jobs” for logging contractors will swallow tracts of rain catchment areas, iconic native species and the integrity of native forests – strongholds of conservation and our ecological heritage.

The decline in Mountain Ash forests not only hurts Leadbeater's, but also a range of key species such as the Sooty Owl or Spot-tailed Quoll, whose protection should also be considered.

These elusive and endearing iconic possums, so small they can fit into a hand, have become pivotal and representative of the conflict between jobs, profits, government power, the demand for natural resources, protecting the heritage and biodiversity that belongs to all generations and species, and the moral and ethical duty of care to conserve native species and their vital habitats.

Petition : Defer the Bill that would lock in long term native forests logging