Mumias Sugar Company, the nation's largest sugar company, owns 51 percent of the project, while most of the rest is owned by state-run Tana and Athi River Development Authority. Local people live in an intricate relationship with the delta’s ecosystems, and are generally opposed to the mill. Irrigation would cause severe drainage of the Delta, leaving local farmers without water for their herds during dry seasons. The Kenya Wetlands Forum is calling on the Government to cancel its approval given to the project. "We cannot just start messing around with the wetland because we need biofuel and sugar," Kenyan Nobel laureate and environmentalist Wangari Maathai has said.

Biofuel production worldwide continues to destroy crucial natural ecosystems required for local and global sustainability. While hailed as a climate change remedy, this destruction of natural habitats for biofuel production almost always releases more carbon than saved. Using food such as sugar for fuel has raised food prices, leading to riots globally, including in Kenya. Let the Kenyan government know destroying ecosystems for toxic monocultures is unethical, ask them to please follow their own environmental laws, and respectfully request the project be permanently cancelled.

Reproduced from original article of 22 Jul 08 on www.climateark.org.

What you can do: Let the Kenyan government know that destroying ecosystems for toxic sugar monocultures is unethical, and ask them to please follow their own environmental laws, and permanently cancel the project.

The BBC news service of 5 May reported that Bolivia's left wing indigenous President Evo Morales has moved to renationalise Bolivia's foreign energy and telecommunications companies. These had previously been privatised behind the backs of the Bolivian people in a process of IMF mandated 'reforms' which began in 1985 under the guidance of shock doctor Jeffrey Sachs.

Evo Morales came to power promising to nationalise the country's energy industry and redistribute wealth to Bolivia's poor indigenous majority. Exactly two years on from his decision to place the country's rich natural gas fields back under state control - and it's clear the project has some way to go.

Bolivia is buying controlling stakes in four energy companies - one in an agreement with the Spanish oil company, Repsol, and the others through state decrees.

Morales and other Latin American leaders take stand against biofuels 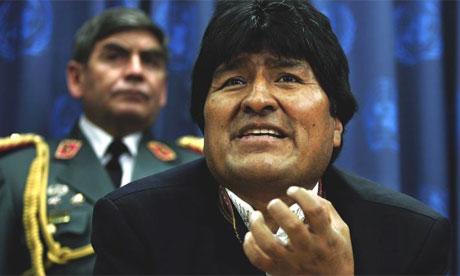 The leaders of Bolivia and Peru have attacked the use of biofuels, saying they have made food too expensive for the poor.

Speaking at the United Nations, the Bolivian president, Evo Morales, said the increased use of farmland for fuel crops was causing a "tremendous increase" in food prices.

The Reuters news agency reported that the Peruvian president, Alan Garcia, called on developed countries to grow more food. In the last few months, food prices in Peru have run ahead of the country's general rate of inflation.

Their attack coincided with a report published today by the environmental group Friends of the Earth warning the EU of the perils of expanding biofuel use in Latin America. Last year the EU agreed on a target of 10% biofuel use for transport by 2020.

The report says the certification schemes being set up by some South American countries to ensure sustainable production of sugar cane and soya bean crops are not enough to prevent damage to the environment and "fail to address the biggest problems" caused by the cultivation of land currently covered by forests or smaller farms.

Morales called on developed nations to accept that problems created by biofuels in developing countries were partly their responsibility. After his speech, he told a news conference that "it is not an internal problem, it is an external problem".

Morales criticised "some South American presidents" for pushing biofuels. This was assumed to be an implicit criticism of Brazilian president, Luiz Inacio Lula da Silva, who had claimed that developing countries have enough land to produce both food and biofuels.

"This is very serious," he said. "How important is life and how important are cars? So I say life first and cars second."

In his UN speech, Morales called for the International Monetary Fund and the World Bank to take action against the biofuel industry "in order to avoid hunger and misery among our people".

Reuters reported Garcia as saying biofuels were "creating very serious problems for countries that have to import these (food) products. We believe there are alternative energies that do not put the world's food in danger."

Peru's government has been forced to hand out food to the poorest in the country's capital, Lima, because of the crisis caused by rising food prices. It has cut tariffs and raised interest rates to try to curb inflation, which rose 4% last year.

Both leaders are facing challenges to their authority.…

Morales, like other popular left wing leaders has to confront rebellions by priveleged groups within Bolivia. Recently in more prosperous regions such as Sant Cruz they have won local referenda in favour of local autonomy.

Morales agreed on Thursday 8 May to hold a nationwide recall referendum within three months, in a risky attempt to break the political deadlock over reforms designed to favour Bolivia's impoverished indigenous population.

"If we politicians can't agree, it's best that the population decide our destiny," he said in a nationally televised address.

The measure will also require the vice-president and Bolivia's nine state governors to face the voters, a crucial test for the government and the opposition in a polarised country.

The recall referendum requires the political leaders to win more votes as well as a greater percentage of support than they did in the 2005 general election. Failure to do so will oblige them to run again in a new election.

Morales, the country's first indigenous president, first came to power with 53.7% of the vote, which by Bolivian standards is a huge landslide.

He used the victory to champion the country's long-excluded indigenous majority, based in the western highlands. The former llama herder promoted socialist policies and forged links with Venezuela's president, Hugo Chávez.

Opinion polls put Morales's popularity at around 50%, suggesting he has a good chance of winning a referendum and regaining the political initiative. He may also be able to pick off some opposition governors.

The president proposed a referendum last December and won the approval of parliament's lower house. The proposal stalled in the opposition-controlled senate until Thursday, when it was unexpectedly revived and then approved. The opposition appeared to calculate that two years of deadlock had weakened its once-mighty foe.

Morales embraced the challenge and said he would sign the measure the moment it reached his desk. The state governors did not immediately respond, but most had previously said they would also accept the challenge.

A recall referendum in Venezuela in 2004 threatened to unseat Chávez, but the socialist leader went on to win handsomely and emerge more powerful than before.

See also Morales sets Bolivia recall date from BBC News of 12 May 08, Morales: The Problem is Capitalism, from La Prensa of 17 May 08 Bolivia's Red Ponchos call to arms Youtube broadcast about Bolivia's indigenous pro-Morales militias - 04 May 08