#E5E4E2;line-height:120%;">Brimbank Council do not have elected councillors. They have 3 appointed administrators. Two years ago they attempted to sell 13 parcels of land "open spaces" but residents fought hard and saved them as vital to the community. Now they are proposing selling one big parcel of land. Community activists believe it is important to retain this land and ask the public to make appropriate submissions.

Published on Wednesday 23 October, 2013 on http://www.brimbank.vic.gov.au/News_Updates/Media_Releases_2013/October_2013/Proposed_sale_of_land_at_93_Furlong_Road_Cairnlea

Council is seeking community feedback for a proposed sale of a 1.925 hectare plot of vacant land at 93 Furlong Road, Cairnlea.

Chair of Brimbank Administrators John Watson said the land was an ideal opportunity to invest in Brimbank as the rapidly growing centre of the West.

“The land, which is in a Mixed Use Zone, has been vacant for a long time; a potential sale presents a great opportunity for appropriate development of the site,” Mr Watson said.

“The purchase and sale of appropriate properties is part of Council ensuring it has the right facilities in the right places at the right time to meet the needs of residents.

“Selling land which is surplus to community needs is an important part of Council’s long-term financial management of the City.”

The site is identified as a site for incremental development in Council’s Home and Housed strategy – which allows for low-scale and low to medium density residential development.

Council undertook a thorough assessment of 93 Furlong Road and found that the area is well serviced with community facilities, so will be an attractive site to a prospective buyer.

Council’s original intent for this plot in 2000 was for the possible development of a civic centre/municipal building.

In February this year, it was decided that the site of the Sunshine Library was the preferred location for a new Library, Community and Civic Centre.

Council cannot and will not sell any land without a full public process of consultation. The first stage of the statutory process that any Council is required to comply with is for Council to publicly signal its intent to sell this land, and then begin the public process to ensure that residents have an opportunity to comment on the proposed sale so Council has all the information prior to making a decision to sell the land.

In accordance with a recommendation endorsed at its Ordinary Council Meeting on 22 October 2013 Council will now publicly advertise its intention to sell the land.

Interested residents can make a written submission to Council about the sale of the land.

Growth, the ultimate dictator: "There seems to be no language that get’s through to our governments in Australia who, it seems are addicted to growth. It’s as though growth is all we can do. We may know of nothing else." 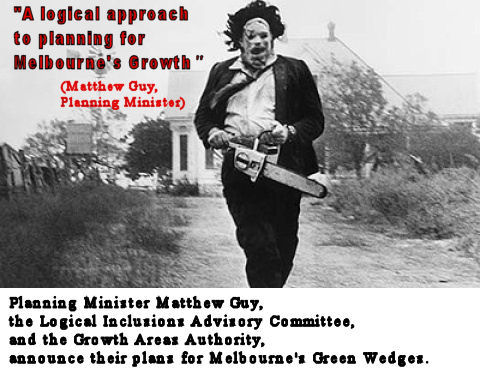 In this land where once many of us enjoyed bushwalking, helping our neighbour, and didn't like pretension, we are now ruled by bodies with surreal names like "Logical Inclusions Advisory Committee" and "Growth Areas Authority," which have replaced the local governments that once answered to residents and citizens. The department of planning and its committee offshoots are peopled by petty privately remunerated bureaucrats, with little apparent loyalty or feeling for this country or its people. Melbourne and Australia are becoming like the movie, Brazil.

It's slash and develop for the foreseeable future if the global economic tidal wave of doom fails to save us from what Matthew Guy announced today in his two press releases, "A logical approach to planning for Melbourne's growth," and "Managing Melbourne's Growth." (on 12th and 13th of June)

"Couched in terms to minimise the full and bloody impact on wildlife and the repressive consequences for democracy, the Minister for Planning's department was keen to portray its planning decisions as politer and more careful than those of its similarly destructive predecessors, the Bracks and Brumby governments. The truth is that, if the Baillieu Government had really been different, it would not be going ahead with plans to massively enlarge Melbourne and to continue unwanted and unsustainably high levels of immigration. It would simply put a cap on building permits and thereby stop permanent moves to Melbourne.

We are to have six more suburbs in places where agriculture or nature currently reside. What is this madness?"

How far will this dumbed down developer economy drag us down?

"The Liberal Government, like the Labor Government before them, seems bereft of any policies to enhance quality of life. Victoria needs sustainable economic development based on productive innovation and diversity of economic opportunities. All the Liberal and Labor parties can offer is a dumbed-down economy reliant on evermore short term housing projects that degrade our environment. Where does Mr Guy’s overdevelopment and sprawl end?"

"Planning Minister Matthew Guy in 2 of his Media Releases today (Managing Melbourne’s growth and “Growth Corridor Plans to Manage Long Term Growth) waxes enthusiastic about yet more urban sprawl. This time, it seems it will be “sophisticated” “attractive” with “great town centres” “services” offering employment, and access to local jobs etc. etc. and will see us through “the next 30-40 years”.

The message however is really sad. There is no end to the plans for Melbourne’s growth and because of this there is no guarantee at all of Melbourne’s continuing “livability”. Livability depends on access to open space which is being systematically and inexorably taken from the people of Melbourne both in the established suburban areas and at the fringes where we used to escape on weekends. It’s getting to be a long drive to the edge of our city and set to increase.

Under endless new housing to accommodate a greater and greater population, our precious farmland and wild life habitat will continue to be annihilated.

Imagine if we were to set that in place! We could see the outer limits of our very large city and have some certainty of its final girth. Conflicts between residents and governments, councils and government authorities would be vastly reduced. There may also be some future for our environment. We may have some hope of coping with oil and other resource depletion. There seems to be no language that get’s through to our governments in Australia who, it seems are addicted to growth. It’s as though growth is all we can do. We may know of nothing else."

"This form of asset speculation masquerading as economic development just does not work anymore, not even for its proponents. All it does now is disable genuinely sustainable planning options by creating a herd of white elephants that have permanent common law entitlement. Beyond being further trampled in the final death throes of this zombie herd, how do we annul the entitlement?

When will 'decision-makers' begin serving today and the impending future rather than a part fantasy world that ended with the GFC and which will be kept permanently in the past by the realities of Peak Oil?"

Thanks to the Habitat Advocate for the good picture.