The 8th of November 2011 in New Caledonia marked the launching of a new program, called, "One tree, one day, One life" at the 7th Conference of the Pacific Community. Deforestation is the hallmark of colonisation in the South Pacific as everywhere. In small islands, deforestation can make the difference between an inhabitable and an uninhabitable island in terms of rainfall. A joint declaration to participate in a program where every island inhabitant in every participating island in the Pacific will plant a tree every year has already been signed by the Marshall Islands, Samoa, the Cook Islands, Tuvalu, Nauru, Tokelau, Vanuatu, Wallis and Futuna and French Polynesia as of the last SPREP summit in Apia in July 2011. 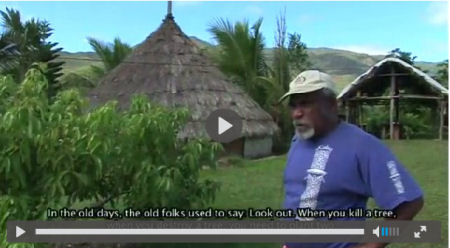 (What do Australia and New Caledonia have in common? See end of article for the answers.)

Pacific Islands get together to plant trees

The 8th of November 2011 in New Caledonia marked the launching of a new wider Pacific Island program, called, "One tree, one day, One life."

The idea is for each island inhabitant to plant one tree every year.

He urged Pacific island countries and territories to unite around a common project in order to make Oceania heard at the Rio+20 Summit in June 2012. He was joined by Samoan Deputy Prime Minister, Fonotoe Nuafesili Pierre Lauofo, who said, "We will not be the last to react."

The Pacific islands are home to some 10 million people and constitute one-third of the world's maritime exclusive economic zone, with its natural riches and biodiversity still relatively intact compared to those of Europe. They represent an invaluable treasure for our planet. The ecology of these islands is, however, damaged and consequently fragile. Climate change is expected to add to their vulnerability.

Deforestation is the hallmark of colonisation in the South Pacific as everywhere. In small islands, deforestation can make the difference between an inhabitable and an uninhabitable island in terms of rainfall. An extreme case is Nauru. Once perhaps the richest and most beautiful of all islands in this area, it was mined into a desert for the its guano phospate reserves, which had been deposited over millenia by a rich population of migratory birds. As the forest disappeared, then the soil, tragically the rain stopped falling. Now the few locals that remain rely on water imported from Australia (itself the driest inhabited continent on earth), and the human population there, once tall and powerful in the region, is now exceptionately unhealthy. 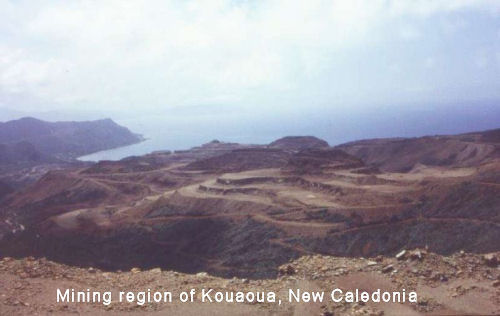 New Caledonia has also been deeply scarred by mining, not for guano-phosphates, but for nickel. The scars are both ecological and social, for nickel-mining meant that there was always a well-paid temporary immigrant strata with power on the island, able to call political shots, running the principle employment sector and massively changing the shape of the land and its use to the great disadvantage of the indigenous inhabitants who were largely deprived of their self-sufficient economic choices.

"Wide-scale mining started in 1875 in Houaïlou and Canala communes. Early mining was done by hand and then gradually became mechanised. By beginning of the 20th century two large mines at Bourai and Thio were established. In the initial years, after nickel was discovered mining was done in about 330 mines. However in 1981 there were only 30 functional mines as against 130 in the early 1970s. [5] Because of the remote location of the islands, about half of the ore was smelted locally, despite the underdeveloped industrial infrastructure of New Caledonia.

The production of ore was nearly constant between 1875 and 1948, but then increased about 70 times reaching a peak of about 8 million tonnes in 1971. This rise followed by a decline, to about 4 million tonnes of ore in 1981, due to cyclones, reducing demand for the metal and increasing role of other world producers, such as Indonesia, Philippines and Australia. Correspondingly, the mined area decreased from 21,500–8,700 hectares (53,000–21,000 acres) and the number of people employed in the industry from about 6,200 to about 3,600. Nearly half of them worked at the mines and another half at the major Doniambo processing plant near Noumea." Source: http://en.wikipedia.org/wiki/Nickel_mining_in_New_Caledonia 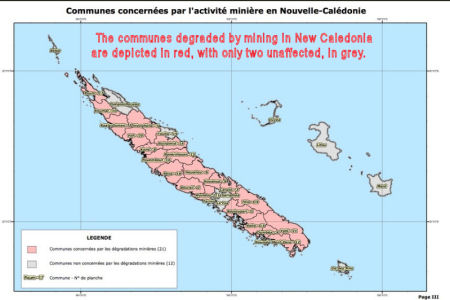 A joint declaration pertaining to the "one tree, one day, a life" initiative for the Pacific region will be signed by those countries wishing to participate in the program, which now includes the Marshall Islands, Samoa, the Cook Islands, Tuvalu, Nauru, Tokelau, Vanuatu, Wallis and Futuna and French Polynesia as of the last SPREP summit in Apia in July 2011.

The joint declaration comes from awareness both of the international responsibilities in ensuring the preservation of the insular biodiversity of the Pacific region in a context of climate change and of the difficulties facing each of the governments in making their voices heard at international level in matters of the environment and sustainable development.

South Pacific islands have suffered from very unbalanced economies since colonisation and this program seeks to contributing to a diversification of the economies of the South Pacific and, in particular, the development of the "green economy."

This article is the result of press communications resulting from the conference with the hope of producing "factual communication with an international reach."

The project unveiled by Anthony Lecren consists in planting one tree each year by New Caledonia's 250,000 inhabitants. That is equivalent to 250,000 trees planted per year over a period of at least 10 years. The program has also been designed to promote economic spin-offs, develop activity in rural areas and ensure livelihoods for those populations all the while contributing to restoring the "human-nature" link.

This project draws on the support of over 10 years of knowledge and experience in terms of existing research and development in New Caledonia and enables consolidation of a number of different projects by their size, geographic scope and economy.

Because New Caledonia suffered by mining, it also has long experience of the problem of reforestation and skilled scientific personnel, organisations and companies to carry this out. New Caledonia hopes to gain more visibility for these specialists in the wider Pacific community and to play an important role in their common reforestation project.

To find out more about biodiversity in New Caledonia, have a look at the biodiversity portal that brings together participants, scientists, institutions, programs and organisations in this project.

What do Australia and New Caledonia have in common?

They are both beautiful Pacific Islands, although Australia is also identified as a continent.
They have both suffered major deforestation for mining and agriculture.
They both have a colonial history which dispossessed an indigenous community, although France has done a better job of providing housing and education for its citizens, including indigenous ones.
They have very similar climate and biodiversity regions.
They were both convict colonies.
Both suffer from the political impact of continued high immigration. In New Caledonia's case this is mainly restricted to French and European skilled or wealthy nationals, whereas in Australia it is part of a virtually unrestricted program to inflate local prices for resources and assets.

Source for announcements about the One Tree, One Day, One Life program launch was a Press release from Noumea, 8 November 2011, from Florence Dhie-Le Guénédal, Antipode Productions. Also: www.1tree1day1life.nc and www.biodiversity.nc