#EDF5FA;line-height:120%;">Christopher James writes that he thinks that it is very wrong-headed for Environment Victoria to claim that, although they recognise the importance of population issues impacting on sustainability & the environment, they are not going to campaign on this because they feel that a state-based organisation cannot make a difference because the federal government sets population policies. Surely one of their core activities could be to pressure and educate the state government who in turn could pressure the federal government to reduce immigration.

This article contains links to a video of an amazing 2007 meeting at Rainbow Beach where the whole town came out against the development, which has now been terminated by a Court case. Predictably, but sadly, however, the people who lost the Rainbow Beach court case look now as if they are agitating for a political solution in the hope of being able to get what they wanted in another way and put lots of buildings on world heritage Inskip point. So, to keep what has been won, it will be necessary to consolidate that victory.

Is it easier to tackle a vast global population problem than it is to save a suburb from overpopulation or a city from population induced water shortages? 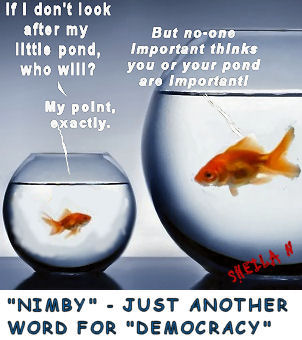 "My concern is the global issue of population" the international aid worker declared in a somewhat self righteous manner. "Australia is nothing," she continued, "Our population is nothing at only 22 million, it is the world that matters!"

The activist she was addressing had been aware of the global population issue since his late teens when he was one of just over 3 billion people on the planet. Now he is one of nearly 7 billion people. He has no children of his own and is unlikely to have any, nor grandchildren.

What more can he do about global population? Presented with a problem as vast as all of global humanity, the problem could seem overwhelming and he could feel tempted to give up. The aid worker's tone was accusatory with the smugness of one who has claimed the moral high ground. The activist was left to contemplate his selfishness in having turned his attention that afternoon to his own sphere of influence.