An unusual thing about Dick Smith's book, "Population Crisis," is that it is written by a wealthy man who points out the failings of rich people. He says that most rich people give nothing away and describes them as very selfish. "Our economic system comes equipped with only one forward gear: foot to the floor growth. The poor want to be rich, and the rich want to be richer. It's an endless treadmill, and none of our leaders appears to know how to get off." Also inside article: Win $1m if you are under 30 by solving the population puzzle. 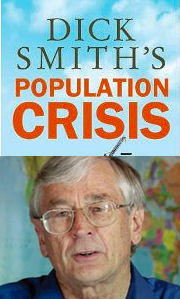 Dick Smith's book, Population Crisis reminds me of the proverb that "It is easier for a camel to go through the eye of a needle than for a rich man to enter the kingdom of heaven," except that here we are talking about the kingdom of Earth.

The fascinating thing is that the camel may just fit through the eye of that needle in Smith's remarkable attempt to save the earth despite his millionaire wealth.

Books like Tolkien's Lord of the Rings are full of rich and powerful noble creatures standing up for truth and justice and the good of the earth in political systems that rely on the kindness and enlightenment of the powerful and their concern for lesser beings, like hobbits. The reality, however, is quite different, particularly in our global capitalist world, where rich people own or invest in corporations which perpetrate global injustices and manipulate public opinion against democracy and against our own nurturing planet.

Smith looks into the future and sees a looming darkness which no good citizen can ignore, but he recognises that the fight against the vested interests of the growth lobby will not be easy.

"I'm not so idealistic as to believe the necessary changes will come quickly, or that the arguments over climate change will end soon. It seems to me that we are like the generation that existed in the late 1930s in Great Britain. Some predicted that there would be a catastrophe if Hitler was allowed to keep breaking treaties. Others - particularly the business community - said that it was unlikely anything would eventuate and that 'business as usual' was the way to go. That error alone resulted in more than 60 million people being killed. If we make a similar error now, the lives lost and related trauma could be far higher."

Australians with ecological bones and a sense of danger can only hope that Dick Smith's intervention on the subject of population numbers, democracy and ecological impact in Australia will survive the deadening blanket of growthist propaganda, even though Dick Smith himself has predicted that the Murdoch press will destroy him for coming out against population growth in Australia.

His unexpected success with other hard problems caused by powerful forces, offers some hope, however.

Smith's ability to remain an independent thinker and so surprise, straddle and surmount the political wedges created by the mainstream media and the political parties between terrorism, refugee rights and population numbers, makes him stand out in stature above high profile groups and individuals on both sides. It makes his ability and leadership so much more powerful.

When amorphous notions of terrorism and Afghanistan stigmatised David Hicks as untouchable for many, discarding prisoners of war conventions, Dick Smith funded Hicks's civilian defense in Guantánamo Bay - not, Smith precises, because he actually agreed with Hicks's politics, but so that Hicks could get a fair trial.

Smith also became involved in helping to extract hostages in Somalia and with refugee-asylum seeker Peter Qasim. Qasim was detained for nearly seven years by the Australian department of immigration due in part to inconsistencies in his story which others have explained as caused by his dispensing with an interpreter in the mistaken belief that his English was adequate for him to conduct his own defense. The main reason that he was kept imprisoned, rather than deported, was that he was stateless - and therefore had nowhere to go. After Dick Smith's intervention and with pressure from a small group of parliamentarians, Immigration Minister Amanda Vanstone invited Peter to apply for a new class of bridging visa that would allow him to live in the community while his situation was resolved. On 16 July 2005, the visa was granted.

Now Smith has written a book about population numbers in Australia. Smith makes an effort to get on top of this wide and difficult subject in a readable book that addresses the growing and reasonable concerns of both the poor and the aspirational classes of Australia and asks those who benefit from their growing insecurity to reconsider.

"Our economic system comes equipped with only one forward gear: foot to the floor growth. The poor want to be rich, and the rich want to be richer. It's an endless treadmill, and none of our leaders appears to know how to get off."

Smith wants Australians to realise how they cannot rely on the mainstream press to inform them on population politics and gives the example of the Murdoch Press.

It is indeed a major irony of Australia's predicament that it has a system that forces all major communications through a biased commercial press which inevitably drowns out any single original initiative with its own ubiquitous and repetitious propaganda. 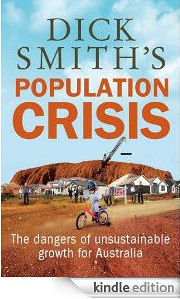 Dick Smith also downplays his intelligence and qualifications. On Margaret Throsby's show on the ABC on 21 June 2011, he said that his only formal qualification was the Baden Powell Scout award.

Smith's intelligence is however uncontestably demonstrated by the fact that at age 38 he had the good sense, self-confidence and self-control to sell the business that made him a millionaire so that he could enjoy his life. That's a bit like Golem (continuing the Tolkein metaphor) ditching the magic ring before it saps his strength.

"I was a relatively young man when I sold my Dick Smith Electronics business. When I could no longer see all the weekly figures in one quick look, I felt it was growing too large. [...] For me it seemed the right time to sell the business to Woolworths. They have built it into a billion-dollar business, and many people have told me I was crazy to sell such a growing concern, but I haven't regretted it for a moment. It was the best thing I ever did, because it allowed me to have the freedom to do worthwhile things - to go adventuring, fly around the world and enjoy my life. "(p.129)

That's the kind of intelligence that can see through growthism. It seems that it is rare in the rich.

"I have successful friends, some of them billionaires, and they often say to me that they wish they could do what I did and get out before the business takes over their lives. I tell them they can, but they just shake their heads as if to say, 'Dick, you don't understand. There are all these pressures that make it impossible to just walk away.' Like most of us, rich or poor, they are trapped inside the delusion that we must forever keep growing."

Maybe the Baden Powell Scout award deserves to be taken more seriously. Smith described to Margaret Throsby how being a cub, then a scout, then a rover was formative. The scout movement allowed him "to be an individual, to organise himself, and get into risk taking."

Smith's parents went through bad luck and poverty. At one stage, Smith's father took to his bed for 12 months causing his mother to go out and get a job for the very first time in her life, in a hat factory. Somehow Smith has missed out on that common rich man's delusion that he deserves to be rich because he is special. He sees himself as having drawn good results in life's lottery, but he has demonstrably retained a feeling of solidarity with ordinary Australians.

An example of this fellow-feeling is Smith's Wilberforce Award. 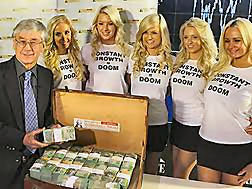 The Wilberforce award is designed to give a one million dollar prize to anyone under 30 who can impress Dick by becoming famous through his or her ability to show leadership in communicating an alternative to our population and consumption growth-obsessed economy.

How the few that benefit financially from growth do it

I can think of one other thing I would have included in the book, had I been Dick Smith. I would have given a detailed account of how, for some very rich people with control over assets, population growth improves the chances of making money. As Smith implies, what makes the rich richer past what he refers to as the "sweet point" tends to make ordinary people poorer. (The "sweet point" is where the cost of growth is less than the gains to be made from it.) I would have liked to have read more detail on how population growth helped Smith make his fortune. It is important to educate Australians on the how and why of this, so that they can see where the corporate growth spruikers are coming from and what they may have to gain from population growth. It would also educate Australians about how difficult having a few people and corporations controlling most of the assets and means of production in this country and elsewhere makes it for everyone else.

One senses that Smith tried to keep things simple in this book. Perhaps he could write another book, to follow up, giving some details on how growth economics and population growth work in favour of the rich and against the rest?