"World opinion" has accepted an act of overt military aggression against Libya, a sovereign country guilty of no violation of the UN Charter, in an act of de facto neo-colonialism, a 'humanitarian' war in violation of basic precepts of the laws of nations. Much of the credit for so moulding international public opinion can be claimed by Gareth Evans the Minister for Foreign Affairs in the former Australian 'Labor' Governments of Paul Keating and Bob Hawke. 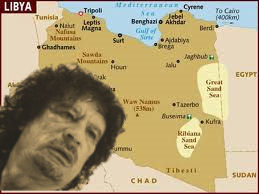 The most remarkable facet of NATO's war against Libya is the fact that "world opinion," that ever so nebulous thing, has accepted an act of overt military aggression against a sovereign country guilty of no violation of the UN Charter in an act of de facto neo-colonialism, a 'humanitarian' war in violation of basic precepts of the laws of nations. The world has accepted it without realizing the implications if the war against Gaddafi's Libya is allowed to succeed in forced regime change. At issue is not whether or not Gaddafi is good or evil. At issue is the very concept of the civilized law of nations and of just or unjust wars.

The Libya campaign represents the attempt to force application of a dangerous new concept into the norms of accepted international law. That concept is what is termed by its creators, 'Responsibility to Protect.'

UN Secretary General Ban Ki-Moon has stated that the justification for the use of force in Libya was based on humanitarian grounds, and referred to the principle known as Responsibility to Protect, 'a new international security and human rights norm to address the international community's failure to prevent and stop genocides, war crimes, ethnic cleansing and crimes against humanity.'[1]

An American President, Barack Obama, has invoked this novel new concept as justification for what is de facto an unlawful US-led military war of aggression and acquisition.[2] Secretary of State Hillary Clinton as Presidential candidate in 2008 said about the concept: "In adopting the principle of the responsibilty to protect, the United Nations accepted the principle that mass atrocities that take place in one state are the concern of all states."[3] Nice words and highly dangerous. According to White House insider reports, the key person driving Obama to move to military action in Libya, citing a nebulous "Responsibility to Protect" as the basis was Presidential Adviser, Samantha Power.[4]

In effect, via the instrument of a controlled NATO propaganda barrage, the US government with no verifiable proof claimed Gaddafi's air force slaughtered innocent civilians. That in turn has been the basis on which Amr Moussa and members of the Arab League bowed down before heavy Washington pressure to give Washington and London the quasi-legal fig leaf it needed. That unproven slaughter of allegedly innocent civilians was why a "humanitarian" war was necessary. On that basis, we might ask why not put a no-fly NATO bombardment operation as well on Bahrain, or Yemen, or Syria? Who decides the criteria in this new terrain of Responsibility to Protect?

There has been no serious effort on the side of Washington or London or Paris to negotiate a ceasefire inside Libya, no effort to find a compromise as in other countries. This is the marvelous flexibility of the new doctrine of Responsibility to Protect. Washington gets to define who is responsible for what. National sovereignty becomes a relic.

Back in 2004 George Soros authored a little-noted article in Foreign Policy magazine on the notion of national sovereignty. He wrote,

"Sovereignty is an anachronistic concept originating in bygone times when society consisted of rulers and subjects, not citizens. It became the cornerstone of international relations with the Treaty of Westphalia in 1648...Today, though not all nation-states are democratically accountable to their citizens, the principle of sovereignty stands in the way of outside intervention in the internal affairs of nation-states. But true sovereignty belongs to the people, who in turn delegate it to their governments. If governments abuse the authority entrusted to them and citizens have no opportunity to correct such abuses, outside interference is justified."[5]

The coup represented by the NATO intervention into events in Libya has been years in assiduous preparation. The first to publicize the concept, 'The Responsibility to Protect,' was Gareth Evans, a former Australian Foreign Minister and CEO of the International Crisis Group.

In 2002, one year before the illegal US-UK aggression against Saddam Hussein's Iraq, Evans published a seminal paper in Foreign Affairs, the elite foreign policy journal of the New York Council on Foreign Relations.[6]

In his article Evans called for the debate on whether or not to intervene into a given country on human rights grounds, even if the events are strictly internal to that country, to be "reframed not as an argument about the 'right to intervene' but about the 'responsibility to protect.' "[7]

That clever linguistic"reframing" created a necessary blurring of lines of the original UN Charter Principle of sovereign equality of states, of Article 2, Section 1 of the Charter. There was a very sound reason that the founding nations signing the UN Charter in 1946 decided to exclude UN police intervention into internal disputes of a sovereign state.

Who should now decide which side in a given conflict is right? Under "responsibility to protect" essentially the United States and a few select allies could potentially define China as in violation of the human rights of its Tibetan or other ethnic minority citizens and order NATO troops to intervene in a humanitarian action. Or NATO might decide to intervene into the internal unrest in Chechnya, an integral part of the Russian Federation, because Moscow troops are attempting to enforce order over insurgents being secretly armed by NATO via Al Qaeda or Mujahideen networks in Central Asia. Or a similar "humanitarian" excusemight be used to call for a NATO no-fly zone over Belarus or Ukraine or Venezuela or Bolivia or perhaps at some point, Brazil.

The so-called humanitarian "responsibility to protect" doctrine opens a Pandora's Box of possibilities for those powers controlling world opinion via CNN or BBC or key media such as the New York Times, to justify a de facto neo-colonial policy of military intervention. This is the real significance of what Gareth Evans blithely terms "reframing."

In mass media framing is a very well-researched subject. The technique refers to a technique of manipulating an individual's emotional reaction or more accurately, his or her perception of meanings of words or phrases. When the Republican Party sought to get support for a huge tax cut for the wealthy on inheritances, something people like Bill Gates or Warren Buffett found relevant to keeping their billions, the Bush Administration reframed the term inheritance taxes to become "death taxes," making it subtly seem like something everyone who ultimately dies should support--only the wealthy inherit, but everyone dies became the subtle reframed message.

A rhetorical phrase is packaged thus to encourage a certain interpretation and to discourage others. Two authorities on framing, Susan Fiske and Shelley Taylor identify why framing is so remarkably powerful as a tool to manipulate perception. It creates a mental "shortcut." According to them, human beings are by nature 'cognitive misers', meaning they prefer to do as little thinking as possible. Frames give us a quick and easy way to process information. Hence, people will use the previously mentioned mental filters to make sense of incoming messages. As Fiske and Taylor note, this gives the sender and framer of the information enormous power to use these schemas to influence how the receivers will interpret the message.[8]

What is emerging, with the aggression against Libya as a major test case in the reframing of military intervention as responsibility to protect, is acceptance of radical new forms of US-orchestrated military intervention, with or without UN Security Council sanction, a radical new form of neo-colonialism, a major new step on the road to a New World Order, the Pentagon's much-sought Full Spectrum Dominance.

The steering organization for embedding the nebulous notion of responsibility to protect is another of the ever-present Non-Governmental Organizations, this one called the Global Centre for the Responsibility to Protect. It in turn, much like the famous wooden Russian dolls, was created by other human rights NGOs including by the International Crisis Group, Human Rights Watch, Oxfam International, Refugees International, typically financed by a small network of donors.[9]

Gareth Evans is co-chair of the Global Centre for the Responsibility to Protect's International Advisory Board, as well as being President Emeritus of the International Crisis Group which he led from 2000 to 2009.

Evans' International Crisis Group which once described itself humbly as "widely regarded as the world's leading independent, non-government source of information, analysis and advice to governments and international organisations on conflict issues,' is hardly a voice of independence or democracy. It is a creation of the leading Washington policy circles pledged to advance an agenda the Pentagon calls Full Spectrum Dominance, which I referred to in an earlier book as "Totalitarian Democracy in the New World Order."[10]

In addition to getting government funds from the US and UK governments, Evans' International Crisis Group also gets generous support from the Rockefeller, Ford and MacArthur foundations.[11] George Soros, founder of the Open Society Institute sits on the ICG Board of Trustees.[12] Until he made his dramatic and well-timed return to Egypt in January 2011, Mohamed El Baradei also sat on the board of the Brussels-based ICG.[13]

The ICG was previously headed by Zbigniew Brzezinski, adviser to US presidents and long-time associate of David Rockefeller. Among other leading figures linked to Evans' International Crisis Group have been founder, Morton Abramowitz, former board member of the National Endowment for Democracy.[14]

The present chair of ICG is Thomas Pickering, former US Ambassador to Moscow and to El Salvator where he was accused of backing creation of death squads. ICG's board also includes General Wesley Clark, former NATO-commander who led the destruction of Yugoslavia in 1999 and Samuel Berger, former US National Security Advisor. Former NATO Secretary General, Lord Robertson of Port Ellen is also a member.[15] This should cause at least some perceptive readers to rethink what Evans' agenda of Responsibility to Protect is really about.

Evans' Global Centre for the Responsibility to Protect, in addition to being active in North Africa and the Middle East, is also directly active in Asia from their center in Australia.

In short they are making major efforts to propandagize the notion of responsibility to protect under the guize of protecting various populations from what they define as "genocide, war crimes, ethnic cleansing and crimes against humanity..." [16] The world community is being subtly brainwashed to accept the radical new proposition with nary a peep of serious opposition

As Michael Barker, an Australian analyst of the use of humanitarian rhetoric and US-based NGOs to advance a Washington agenda noted, "Perhaps if 'evil' Qaddafi had been a bona fide US-backed dictator...the US government could have exerted more influence over Qaddafi's political choices, and encouraged him to back down and allow himself to be replaced with a suitably US friendly leader. However, it is precisely because Qaddafi is not a Western-backed dictator that external powers cannot force his hand so easily: this helps explain why the world's leading...elites were so keen to use the humanitarian pretext to support his opponents in the civil war."[17] It sets a dangerous precedent indeed, as many nations are now beginning to realize.

F. William Engdahl is author of A Century of War: Anglo-American Oil Politics and the New World Order

5. George Soros, The Peoples' Sovereignty: How a new twist on an old idea can protect the world's most vulnerable populations, New York, Foreign Policy, January 1, 2004, accessed in http://www.foreignpolicy.com/articles/2004/01/01/the_peoples_sovereignty.

9. Global Centre for the Responsibility to Protect, Who We Are, accessed in http://globalr2p.org/whoweare/index.php

16. Global Centre for the Responsibility to Protect, Who We Are, accessed in http://globalr2p.org/whoweare/index.php