Our parklands are under threat!  Hundreds of kilometres of new freeways and expanded roads would be built across Melbourne over the next 30 years, under plans revealed in a highly detailed government map obtained by The Age in 2010 .   This threat includes the promised $6 billion North-East Link freeway/tunnel through Heidelberg, and a major road from Eltham to Donvale.

According to The Age (27/4) - - rail loses out to road spending. Road building has received four times more federal, state and local government funding over the past decade than new rail projects, the report says.

Only Tasmania spends less on rail, and they have no commuter rail system. The ACF found that Australia’s public transport sector is a poor cousin to roads when it comes to funding. Our government is simply a living relic of a former era, trapped in a 1950s/60s time-warp!

Heidelberg/Banyule's heritage includes valuable parklands worth protecting. The Heidelberg area is recognised as originally belonging to the local indigenous people, the Wurundjeri willam. Sacred sites, traditional names and indigenous community contributions are important to our understanding of the region's past, present and future.   In 1837 government surveyor Robert Hoddle surveyed the area and created three parishes extending from what is now Fitzroy to beyond Diamond Creek.

With Melbourne's expansion in the early 1900s, many successful farmers, government administrators and entrepreneurs bought blocks of land and small farms in the area, and there are many examples of significant period houses, mansions and “gentlemen farmers”.

John and Sunday Reed purchased the property now known as Heide in 1934, transforming the original Victorian farmhouse into the French provincial-style cottage we see today. The house and property were named Heide, in an affectionate reference to the nearby town of Heidelberg.
Banyule has close links with the birth of the Australian Art Movement and significant Heidelberg school artists such as Albert Tucker, Sydney Nolan and Sunday Reid, who lived and painted in the area during the 1940s and 50s. Sydney Nolan's first art exhibition was held in Burgundy Street, Heidelberg.

Throughout the early 1900s farms in the Heidelberg area gave way to residences, shopping centres sprang up along the main roads, and garden suburbs began to appear, particularly around Ivanhoe, Darebin and Eaglemont.

Banyule is renowned for its open spaces and plentiful parklands, especially along the Yarra and Plenty River valleys. People can enjoy the picturesque area for bike riding, walking, the Heide Museum for Modern Art and great local restaurants and for sporting activities. It is a place where people can see and appreciate wetlands and native fauna and flora.

Little value given to natural heritage

There are few places left in  Melbourne where you can find koala's, kangaroos, 115 bird and 4 bat species all in one place.  It's no accident that many now well-known artists and architects enjoyed the river views and the pretty landscapes.

River parks such as those of the Banyule Wetlands and within the Yarra Corridor are a vital area for wildlife, rare migratory birds and protected species of flora, with large areas currently under protection by Banyule Council.

However, our natural assets get very little protection in Victoria, and are unlikely to stop the destruction. Peninsula Link went straight through the heritage listed Westerfield property complete with endangered species and hardly a person lifted a finger to help! A gang of mounted police came to assist the bulldozers, and they arrested a few protesting grandmas. Brumby’s road builders bulldozed the area without re-homing any of the animals - just bulldozed them and their homes too!

For the freeway/tunnel/viaduct to proceed, adaptions to our landscape may include:

* Acquisition of Watsonia Barracks land – an important green wedge
* Installation of sound walls along Greensborough Road from the Western Ring Road to Lower Plenty Road
* Possible interference with land at Heide Museum of Modern Art at the tunnel exit points at Manningham Road
* Likely loss of current parkland and damage to the same caused by 'staging areas' for tunnel construction at the entry and exit points of the tunnel
* Interchanges that will have to built at each end to allow entry and exit points from the tunnel/freeway
* Land acquisitions and sound walls along Bulleen Road
* Fly-overs along above ground sections of freeway (Greensborough Road and Bulleen Road)
*Increased noise, pollution, and loss of important biodiversity/parkland areas 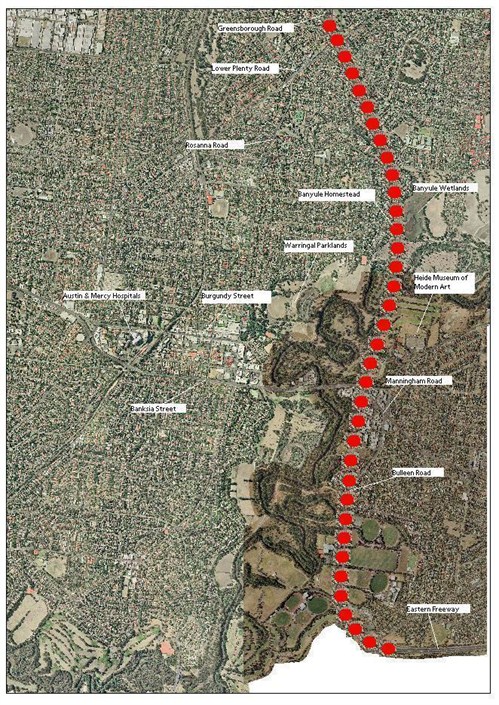 (The proposed route of the North East Link - right through Banyule historic parklands!)

There are environmentally and economically viable solutions available without the heavy costs and destruction that would be incurred by this monolithic construction.

Roads assume plentiful petrol, but with peak oil, vehicle use must wind down. Rail must be our future, with transport hubs to finish the distribution for goods and services.

Our State government is still adhering to the retro idea of roads and bridges, simply ignoring peak oil and climate change implications. They are also deeply entrenched in the outdated “populate and perish” – rather than a steady-state economy for survival on diminishing resources and climate change.

More should be spent on rail, the future of public transport, than on petrol-dependent cars and trucks. We should be consolidating our existing city, not forcing its expansion and passing the costs onto the public.

The price of continuing an out-dated freeway/tunnel system for Banyule would be far too high. It would mean a loss of its historical, social significance, and biodiversity green-wedge – all natural wealth that is becoming far too frequently destroyed in the name of “progress”. The tunnel will morph into an above-ground freeway due to lack of funds!

Build more roads and you get more car parks and obesity, pollution and oil consumption. On the contrary, if you invest in active public transport and you gain health, access, mobility and liveability.

Victoria already absorbs more Federal funding than we should in proportion to what we contribute to Australia's overall GDP. We may take a larger proportion of immigrants, but this does not translate into economic growth, but more spending.

Road investment is the equivalent of Harvey Norman's three years interest free - by the time it's paid for it may no longer be an asset but a monolithic white-elephant!

Where's our government's contingency plan for peak oil? They are burying their heads in the sand, and continuing along the "business as usual" route by focusing on short-term gains! More should be spent on rail, the future of public transport, than on petrol-dependant cars and trucks. We should be consolidating our existing city, not forcing its expansion and passing the costs onto the public.

And they expect us to pay carbon tax? Will they invest in rail, suburban rail?

North East link offers no solution.
The North East Link freeway will not alleviate the traffic congestion along major roads such as the Greensborogh Road, Rosanna Road, Lower Heidelberg Road and Banksia Street. Studies have shown that the use of these major roads will continue to increase in the years to come. Do we really want our city of Marvellous Melbourne to turn into Los Angeles in a desperate attempt to "solve" our traffic problems? These planners are simply ignoring the reality of peak oil, climate change, and pollution. All these freeways, attempts to secure water for Melbourne, and land developments over green wedges and market gardens is our government's attempt to increase our population!

Our parklands used to be a treasured spot for artists who were inspired by the beauty of the trees, hills, the river, the colours and the tranquility of the area. Our democratic rights, our heritage and amenities should not be up for grabs and be trampled on when there are alternative solutions to the congestion.

PS: Thanks to Marion Ware of Friends of Banyule for her collaboration with this article, and all their efforts to stop this freeway madness.