You hear people like Rob Adams and Marcus Spiller saying there is nothing you can do about population growth in Victoria and Australia. Wrong. For a start the government should cancel the Live in Victoria website that invites people to come to Victoria and which explains how to get a visa. There is one in every state (Qld, NSW, the ACT, Tasmania[1], SA, WA, NT). They should all be pulled off the web. 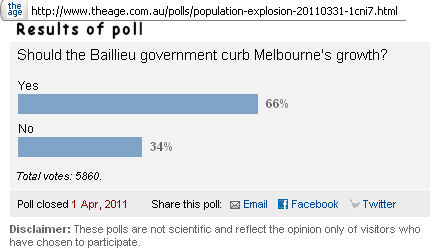 Results of Melbourne population poll, added to this article on 16 April 2011. 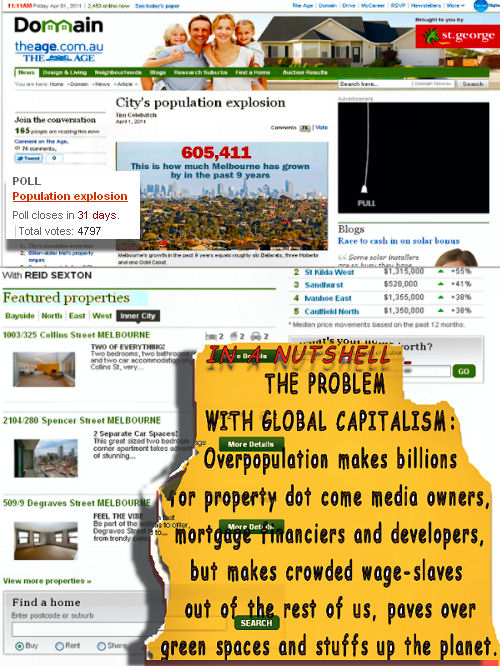 Having been involved with trying to save Melbourne from overdevelopment for many years, numerous conservation and environment activists are convinced that no government can manage the speed and magnitude of growth.

So tell them at The Age. Comment and vote via the link supplied to a poll in The Age today. And stop buying property. That only lines bankers' and developers' pockets and gives them more power over politicians. The Age is not Melbourne's 'better' newspaper, it's just a a huge international property developer and financier. So is the Australian, with www.realestate.com.au. That's the real news. Sadly it's a long time since there was much real news in those papers.

Then tell the Feds that we want to reduce Melbourne's population so stop importing so many immigrants. For years now Victorian Premiers have been demanding more immigrants of the federal government in order to please big business. Make our leaders care about democracy.

Nothing is inevitable unless you let it be so.

The Victorian Coalition has admitted that funds don't exist to finance the infrastructure needed to stuff all these new people in with a giant shoehorn - so why do we want even more people?

The answer is that we don't want them; the property developer and financier-run government does.

Tell those parasites to get the infrastructure fixed and then ask us again and listen to the answer.