Update footage on you tube:

Ed. On 18 October 2010 I received a short email from Prof Francis Ronsin, in Paris, headed “Strikes”. He wrote: “Social war has broken out in France. It is a long time since I had reason to be proud to be French!” So I wrote back to ask for a few paragraphs about the strikes that are paralyzing business as usual and liberating French society, which I have translated here -- Sheila Newman See also "1.3-2.5m French demonstrate against raising retirement age" and "French General Strike on Retirement Age takes to highways of France 13 October"

A surprise for everyone

For several months there have been calls to strike – often with little response – and big demonstrations – with totals of several million people involved, each time, throughout France. The government insisted continually that it would not give in and it seemed possible that the strikers and the demonstrators would finish up becoming discouraged.

The first change in these trends occurred last week. High school children (15-18 years old) then middle school children (12-15 years old) began barricading their school entrances and confronting the police in the streets. They were protesting: many young people are unemployed and if the elderly are made to work longer … It was also a game, a party.

Another change in trends occurred over the weekend. Protesters blocked access to petrol depots. Truck drivers were asked to form roadblocks. Police were running everywhere. As they unblocked roads in one place, roadblocks would go up somewhere else. Petrol has now run out in many towns and even throughout regions. Little demonstrations are occurring everywhere, involving a few dozen or a few hundred people.

Why in France and not elsewhere?

Today (Tuesday) is a day of strikes and demonstrations throughout France. It’s likely to be risky! Sheila Newman asks the question: “Why in France and not elsewhere?” Do the French have a more conflictual temperament? Is it because of historical tradition? Difficult to say. What is certain, is that there is a link between opposition to a law which most French people do not want and a very strong anger, even hatred, towards the government, above all, towards President Sarkozy.

Rights of partial or full reproduction of this article are forbidden without permission from Francis Ronsin. 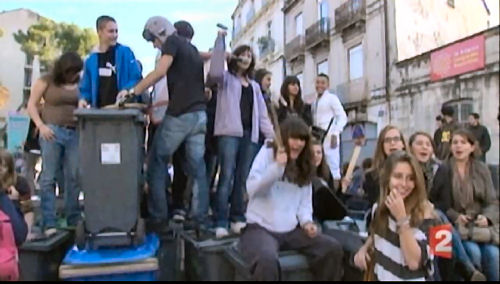 "SMS and Facebook work really well. People discuss these matters all night. The next day they are organised."

Members of the massive French union confederation CGT (Confederation Generale du Travail) joined with other union confederations, taking from the streets to the freeways and regional highways in France. Members used slow driving to slow traffic and others distributed information to drivers and passengers all over France, and encouraged ordinary citizens to express their support. School students and young workers continue to participate.The striking had gone into a new organisational mode. 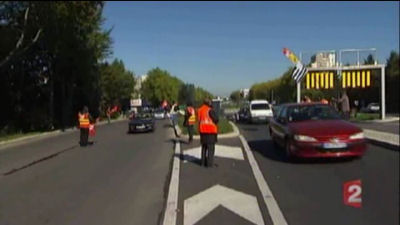 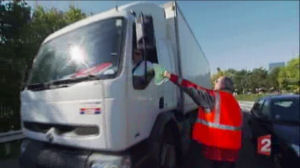 Members of the massive French CGT (Confederation General de Travail) joined other unions, taking from the streets to the freeways and regional highways in France. Members used slow driving to slow traffic and others distributed information to drivers and passengers all over France, and encouraged ordinary citizens to express their support.

The striking had gone into a new organisational mode.

Young workers expressed themselves in groups outside factories and marching in the streets.

"You only have to look at your parents when they come home from work half dead to know that working longer is a bad idea." 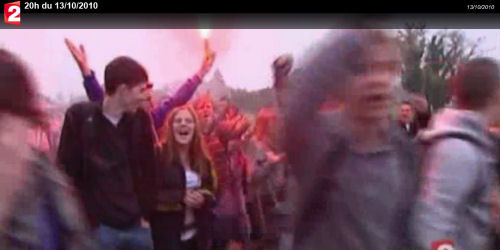 One said that you have only to look at the state their parents return home from work of an evening to know that it is a bad idea to extend working years. They return home half-dead.

High school children and young workers were also much in evidence again. 3 per cent of high schools were said to have participated, according to Actualites Francaises (http://jt.france2.fr/20h/

As one girl said, "SMS and Facebook work really well. People discussed issues all night." Obviously French youth are using electronic opportunities to organise, along with their parents and compatriots.

In what looks like a defensive rear-guard action by the government, which feels threatened by real political engagement of young people in France, Ségolène Royal, who, in 2008 contested leadership of the French Socialist Party was accused in parliament of having inadvisedly mobilised schoolchildren in the streets. She defended herself by saying that she had advised them to participate safely. 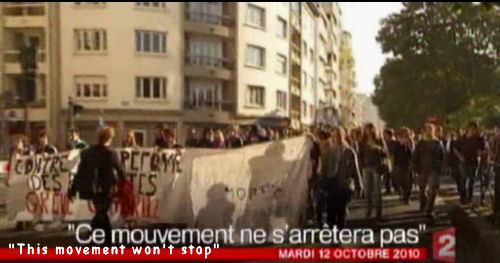 Between 1.5 and 3.5 million French people demonstrated in the streets against raising the retirement age on Tuesday.

The French can still really organise a democratic protest. 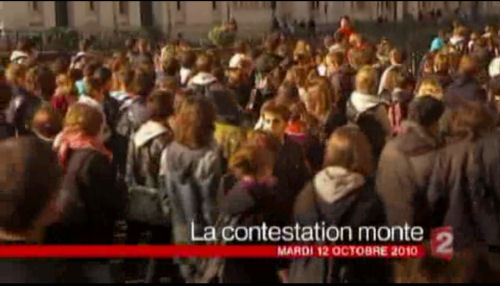 Where the populations of so many Anglo* countries have been politically fragmented by mass immigration and the consequent geographical restructuring of society with constant changes to streets, suburbs and buildings, big towns in France largely retain their original street plans and the French themselves retain the characteristics and the capacity to network of a big old tribe that shares the same history, in a land still largely controlled at local level, despite the sophisticated central government.

On Tuesday 12 October, between 1,230,000 million and 3,500,000 million French protested in the streets of Paris and in hundreds of towns and cities in a National General Strike against Retirement 'Reform' policies that the government has been trying to bring in for some time. The unions estimated the number at 3.5m and the government estimated it at 1.23m. 250 marches took place in different parts of the country simultaneously. 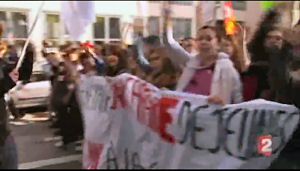 This was not the first strike against the raising of the retirement age, but for the first time many high school children were out in the streets, as well as university students and young people who had just begun to work. They were campaigning on their own behalf because they saw their futures as threatened by attempts to raise the number of years worked in order to qualify for a full retirement pension from 41 to 43 years.

It is hard to imagine such political engagement by youth on intergenerational issues of finance in Anglo countries. The solidarity is lacking. 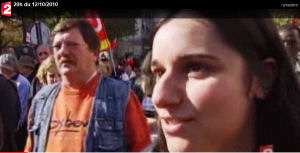 They were protesting that, if the trend to raise the age of retirement continued, they would be working until they were extremely old. They also protested that if people retired later and later, there would be no jobs for young people.

Unlike the anglo-norm where people have been taught to endorse the work-ethic as the be-all and end-all, the French are more sensible and frank. As one elderly man said, "I don't want to work two more years. I'm tired. Give my job to a young person."

And a young woman, who said, "If I have to work for 43 years to put aside enough to qualify for retirement, what if I want to have children? When will I have time to do that?

Other young people said, "We don't want to work until we drop. And there won't be any jobs for us if people continue to work past the age of 60."

Entire families went out into the street, like this woman, who held up a sign, explaining that she was 43 years old and employers said she was too old to work, but if the government had its way she would have to work for 43 years to get a pension. She said the situation meant that for her family poverty will be permanent.

She would, of course, be worse off in the US or Australia, where rents and land and house-prices are far higher and there is almost no public housing, and where unemployment benefits are not guaranteed, as they are in France.

Vive la France! We can all learn from France.

For another article showing the tribal muscle of the French, see what happened when the government tried to privatise the post-offices.

Obviously the same pressures are being applied to France as have been successfully applied to the Anglo-countries, where privatisation and superannuation, instead of proper pensions, is rampant. The difference is that, even though the French Press, like the Anglo-press, tries to manufacture a reality and normalise the idea that 'most' people agree that privatisation and working longer are 'necessary', due to the relatively intact family and clan organisation of the French and the strength of local government, it is harder to put one over them, because neighbours and families still communicate.

Why don't Anglo populations have the same ability as the French to self-organise?

In countries like the USA, England, Canada and Australia, the artificial organisation of their populations, with people working far from their homes, and living in newly built estates where neighbours have no shared history, and where people are out of touch with their relatives and 'clans', the basic structure of social organisation has been fragmented and smashed. The growth lobby has been in control too long and the people are not really citizens, more clients of a corporate state which is in the business of land-speculation, financed by taxes and the selling off of national estate. In France, state property development and subsidisation of all housing have made it hard for the private growth lobby to pervert democracy and impose their own restructuring on the population. For more on this read the relevant sections on The Growth Lobby and its Absence".

There are two levels of ordinary pension in France. To get a full pension you now need to have worked for at least 41 years. You may qualify for a pension at age 60 years, regardless of when you began to work, but 10% is taken off for every year less than 41. People who work 65 years get a better pension, although this is also subject to deductions if they have not worked for at least 41 years. There are also variations on the retirement age depending on occupation. For people who work in the liberal professions, it is 65, and for some other occupations, it is 50 or 55. In some cases people who have not been in paid work nonetheless are counted as if they had been, for example, mothers who have disabled children.

A law in 1999 created the Reserve Fund for retirees.
The left, which came into power in 1997, did not try to change the retirement age, but voted in a law on financing social security in 1999, through which a Reserve Fund for retirees (FRR) was created. This fund made it possible to put aside a surplus which originated during the years of strong economic growth, 1999, 2000 and 2001. The FRR aimed to protect low-waged workers against the possibility of harsh changes to retirement law which might accompany an economic crisis. The funds accumulated under the FRR were expected to reduce the pressure the government might feel to raise the retirement age or increase superannuation levies.

The French government decided after 2002, when economic growth had slowed, to stop putting money into the retirement reserve fund. Nonetheless, in June 2010, there were 34 billion euros in the FRR funds. (Source: http://fr.wikipedia.org/wiki/Retraite_en_France#Confiscation_des_sommes_capitalis.C3.A9es_en_1941

Source of photos and major source of news was: JT France2

*"Anglo" - refers to countries which have inherited the British systems of land-use planning and inheritance, usually through colonisation, but also refers to the UK, even though it is now part of the EU and may now change.