Australia presently exports about 260Mt of coal each year, or about 30% of the world’s total coal export trade.

Coal is the dirtiest of all fossil fuels. When burned, it produces emissions that contribute to global warming, create acid rain and pollute water.

Those who claim that “clean coal” can help solve the global climate change crisis are referring to a process called “Carbon Capture and Storage” (CCS) , also known as “geosequestration”. This refers to the capture of carbon dioxide emissions from a coal- or gas-fired power plant or other industrial source, transport via pipelines or haulage, and storage of the gas underground or in the ocean, in isolation from the atmosphere.

The Government is putting hundreds of millions of dollars towards championing the commercial use of carbon capture, regarded by many as a key to cutting greenhouse emissions from coal by storing the polluting gases deep below the surface.

A report, prepared by the Global Carbon Capture and Storage Institute, finds the cost increase to coal electricity generation if fully-fledged clean coal technology is installed will be up to 78 per cent. 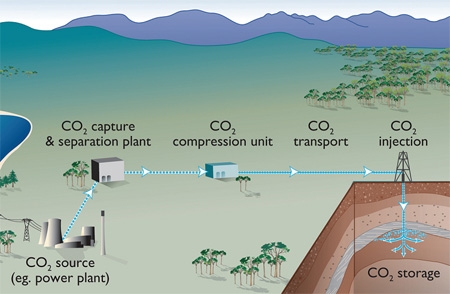 ABARE predicts that Asia-Pacific Partnership on Clean Development and Climate (AP6) has the potential to “reduce” global emissions in the year 2050 to between 11 and 23 percent lower than they would otherwise have been. This translates into a doubling of greenhouse emissions compared to today's levels.

ABARE's estimate assumes CCS deployment in all new coal plant in Australia, the US, and Japan from 2015, and in China, India, and South Korea from 2020. This seems hopelessly unrealistic, and it should be noted that the Federal ALP's enthusiastic embrace of CCS aims merely for commercialisation by 2030!

In 2006 a report by the Energy Supply Association estimated the wholesale cost of electricity would increase by about 50 per cent to make cuts of 30 per cent by 2030.  That's a 50% hike in electricity prices for a mere 30% reduction in emissions cut.

According to the World Wildlife Fund: “The reality is that if CCS (or other renewable technologies) is ruled out or delayed we face the the reality of accepting a 2.5 - 3 degrees rise. If we reach a three-degree rise in temperature, 35 per cent of species will become extinct. “

Senator Brown cited generation of electricity as the largest source of green house gas emissions in Australia, noting further that 85 percent of our electricity generation comes from coal burning. " The government wants to inject billions of dollars into upgrading infrastructure in coal industries so we can export more rapidly once the recession is over.”

"Clean" coal power stations are not viable until the carbon price reaches a minimum of $60 a tonne, and that is not predicted to happen before 2030, according to Rudd government's own global carbon capture and storage institute.

A recent Greenpeace International report, tracking all peer-reviewed studies of 'clean coal technologies', found that it remains a false hope peddled by coal industry PR merchants and some governments who are in their back pockets (eg. New South Wales).

According to the report:

"The climate crisis requires urgent action. Climate scientists warn that to avoid the worst effects, global greenhouse gas emissions must peak by 2015 and then start falling by at least 50% by 2050, compared to 2000 levels".

Carbon dioxide concentration in the atmosphere is likely to reach the first climate change danger level by 2028 and if emissions growth continues at the present rate, the point of no return will be reached with dire consequences by 2046, according to new scientific research published at the National Academy of Sciences.

Yet if each person in the world had produced as much carbon as the average Australian, the total release of fossil carbon would have been four times higher.

Nations such as China and India may be in the top five emitters by volume, but on a per capita basis they are both way below the world average. As they industrialise, their per capita rate will go up.

"It's easy for politicians to make statements about the long term because they don't require much policy action or affect voters now." ( The Australian in April 2007)

Australia has surpassed the US as the world’s biggest per capita producer of carbon emissions, according to a report by a British risk consultancy.

Analyst Maplecroft estimates that Australian CO2 output per head of population now stands at 20.5 tons annually, putting it ahead of the 19.7 tons emitted by the average American.  By comparison, China – which emits more carbon overall than any nation – has a per capita average of about 4.5 tons. In India, where greenhouse gases are expected to double by 2031, emissions are just 1.1 tons per person.

An  audit, by the Global Carbon Project, found carbon dioxide levels from human activities are increasing by about 2 per cent per year, or 1.3 tonnes of carbon per capita.  By 2011, emissions will have "recovered" to something like 3 per cent per year, roughly what they were before the global financial crisis.

Scientists blame an increasing use of coal for the continuing rise in carbon emissions.

According to the WorldWatch Institute Livestock now account for 50 percent of emissions from agriculture and land-use change.
"Indeed, a cow/calf pair on a beef farm are responsible for more GHG emissions in a year than someone driving 8,000 miles in a mid-size car.  Serious action on climate will almost certainly have to involve reducing consumption of meat and dairy by today’s major consumers and slowing the growth of demand in developing countries."

The UN Population Fund report predicted that the global population could reach 10.5 billion by 2050, up from 6.8 billion today, unless urgent action was taken to reduce fertility rates. It said that even its medium-growth forecast of 2.3 billion more people by 2050, which assumes a fall in average fertility from 2.56 to 2.02 children per woman, would make it much harder to achieve the cuts in carbon emissions needed to prevent catastrophic climate change.

Investing in birth control to reduce population growth could be more effective in cutting greenhouse gas emissions than building wind turbines or nuclear power stations, according to a United Nations report.

The emission of greenhouse gases, associated with industrialisation and strong economic growth from a world population that has increased sixfold in 200 years , is causing global warming at a rate that began as significant, has become alarming and is simply unsustainable in the long term.

"Even if humankind failed to produce a single baby during the next generation, its life on Planet Earth would still be endangered by climate change.
On the other hand, if the per capita consumption levels of the relatively small and slow-growing developed countries (under the same technological and environmental control conditions) were to be achieved by some of the large and/or rapidly-growing countries, the serious environmental problems of Planet Earth would inevitably take a quantum leap".

Can cleaner coal technologies really increase and overtake our rate or industrialisation and population growth without blowing out the costs? With the failure of Copenhagen summit, a more realistic "solution" to climate change would be to reduce our population with birth control, surely.