The crisis in Venezuela will not be solved by sanctions that “can lead to starvation”, a UN-appointed rights expert said on Thursday. Special Rapporteur Idriss Jazairy, who reports to the Human Rights Council, issued the warning against the background of widespread suffering in the South American country, linked to spiralling economic woes and deep political uncertainty. (Article first published at United Nations site 31 January 2019.)

An estimated three million people have left the oil-rich country since 2015, while supporters of self-appointed interim President Juan Guaidó, continue to demonstrate against the government of the incumbent, Nicolás Maduro, who was re-elected last May amidst allegations of electoral irregularities and a widespread opposition boycott.

“Sanctions which can lead to starvation and medical shortages are not the answer to the crisis in Venezuela,” Mr. Jazairy said in a statement, prompted by the imposition of sanctions on Venezuela’s national oil company by the United States.

Precipitating an economic and humanitarian crisis…is not a foundation for the peaceful settlement of disputes - UN independent rights expert, Idriss Jazairy

“I am especially concerned to hear reports that these sanctions are aimed at changing the government of Venezuela,” he added, while also noting his concern about reports of serious rights violations that include “the growing risk of violence and implicit threats of international violence”.

In a call for “compassion” for the people of Venezuela, Mr. Jazairy, who is UN Special Rapporteur on the negative impact of the unilateral coercive measures, insisted that “precipitating an economic and humanitarian crisis…is not a foundation for the peaceful settlement of disputes”.

Such “coercion” by outside powers “is in violation of all norms of international law”, the rights expert maintained, before calling on the international community to engage in constructive dialogue with Venezuela to find solutions to problems that include hyperinflation and the fall in oil prices.

In a recent statement issued by the office of António Guterres, the UN Secretary-General urged parties to “lower tensions” in Venezuela and called for all relevant actors to commit to inclusive and credible political dialogue.

Concerned by reports of casualties during demonstrations and unrest in and around the capital, Caracas, the UN chief also called for a transparent and independent investigation of those incidents.

Last Saturday, the UN Security Council met to discuss the situation in the country, in which the UN’s top political official said that dialogue and cooperation were vital to ending the crisis.

The meeting was requested late last week by US Secretary of State Mike Pompeo following days of political unrest and deadly clashes in Venezuela between protesters and security forces.

The UN human rights office OHCHR reported on Tuesday, that at least 40 had been killed in the unrest, including 26 shot by pro-Government forces. More than 850 were detained following demonstrations in the past week, including 77 children.

“We must try to help bring about a political solution that will allow the country’s citizens to enjoy peace, prosperity and all their human rights,” Rosemary DiCarlo, the UN Under Secretary-General of Political and Peacebuilding Affairs, urged the 15-member body.

Nearly all 30 million Venezuelans are affected by hyperinflation and a collapse of real salaries, Ms. DiCarlo warned, citing shortages of food, medicine and basic supplies, along with a deterioration of health and education services and basic infrastructure such as water and electricity.

Mr. Jazairy, urged all countries to avoid applying sanctions unless approved by the Security Council, as required by the UN Charter. 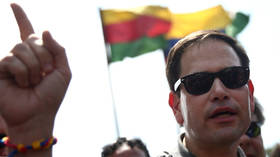 ‘Sick & twisted’: US Senator Rubio tweets picture of Gaddafi’s murder as a threat to Maduro


US Senator Marco Rubio has posted a picture of the brutal murder of late Libyan leader Muammar Gaddafi in a less-than-subtle threat to Venezuela’s Maduro. Twitter blasted Rubio as a manic warmonger… who has extremely poor taste.

It is remarkable to watch the sociopathy of the US administration unfold publicly, as if the political actors have injuries to their frontal lobes and no longer sense danger or that people are watching. What is this dementia that seems to afflict John Bolton, Donald Trump, Mike Pompeo, and now, like mad cow disease, wannabe president Marco Rubio? Hilary had it too because she was the one who cackled in triumph as Gaddafi was killed in the most horrible way.

When Mike Pompeo addressed threats to the Venezuelan Army, you can see him fatly snuggling against himself in his suit with delight, eyes shining, at the idea of all the harm he might do. John Bolton, whose hair and moustache make him look like a cartoon character made out of a toilet brush, with his scrawled "5000 troops to Columbia" and "All options are on the table," seems to be the straight-man of the murderous alliance, making insane threats as if he were handing down detentions at school.

And Trump: "You can choose to accept President Guaido's generous offer of amnesty to live your life in peace with your families and your countrymen or you can choose the second path, continuing to support Maduro. If you choose this path, you will find no safe harbour, no easy exit, and no way out. You will lose everything."

And then, like icing on a cow pat, Virgin Blue's owner, Richard Branson, strutting round amongst the poverty and drug barons on the border of Columbia (itself a fine product of US intervention), promoting his "Live Aid concert". He said he talked several times to Juan Guaido - but he didn't talk to Maduro! What motivated him? The desire of a little man to be a part of the US big boys' psychopathic game? All he inspired in me was disgust and indignation - to be so rich and to be so stupid, and to be willing to do such harm, seemingly just to grandstand.