In an on ne peut plus Orwellian development, a French court has ordered the leader of the Rassemblement National Party (name change from Le Front National), Mme Marine Le Pen, to undergo a psychiatric examination. Le Pen was taunted as having terrorist policies by radio-jock, Jean-Jacques Bourdin in 2015 and she responded by posting a photo of some Daesh terrorism, as an example of real terrorism, to show that the Front was not terrorist. Amazingly, the state ignored the rationale of the response and, despite the political nature of such a move, managed to have her European parliamentary immunity removed and has persevered in having her tried. Although the psychiatric evaluation is actually routine in such cases, the case itself is not routine.

Details of the case 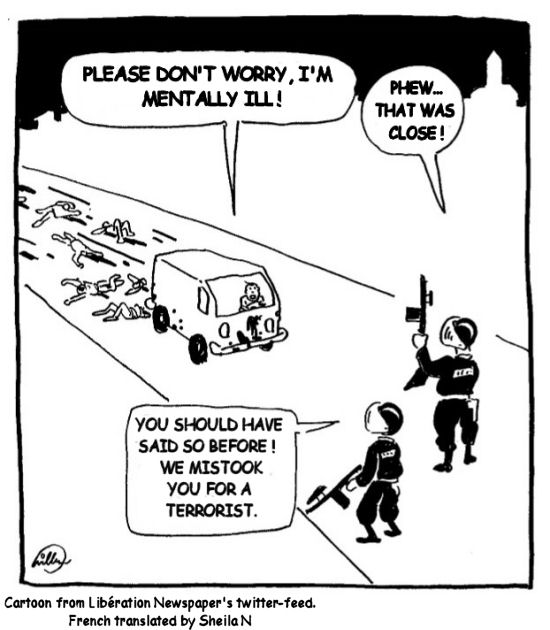 As president of the French National Front, on 16 December 2015, M. Le Pen posted photos of bloody hostage executions by jihadists from ISIS, on her twitter account. She had found these published unrestrained on internet media. Via these twitter messages she was addressing Radio Monte Carlo (RMC) and announcer Jean-Jacques Bourdin. She accused Bourdin of having drawn a ridiculous parallel between her political party and ISIS, which had recently carried out attacks on France. Her point was to show how different the Daesh photos were from her own party's material. In what seems like a shockingly corrupt and cynical political tactic, The French Government got the European Parliament to remove Le Pen's parliamentary immunity, so that they could prosecute her for this relatively trivial reaction. Now, as reported in late September 2018, Le Pen is being required to submit to a psychiatric examination. Whilst such an examination might seem like the ultimate attack on a rival politician by the French Government, these examinations are actually mandatory and routine in all French prosecutions for terrorism. What is not routine is to remove parliamentary privilege from a politician in order to prosecute him or her for an action designed to respond to a hyperbolic media taunt. Even Le Pen's rival and critic, Jean-Luc Melanchon, has criticised this requirement in the circumstances.

Ms Le Pen is actually a qualified criminal lawyer herself.

In the context of anti-globalist parties winning elections in Austria, Italy, Hungary, Slovenia and Poland, French President Macron is losing approval daily and Le Pen's approval is growing again. Potentially Le Pen could go to prison for up to five years. Macron has committed France to illegal US-NATO wars and is intent on destroying aspects of France's Civil Code provisions for labor [1]; presumably throwing a rival into prison would not be beyond him, any more than it was for Tony Abbott [2] in Australia.

Soviet tactic condemned by other politicians

Jean-Luc Mélenchon, previously of French Communist and Socialist parties, currently leader of La France insoumise, tweeted that he was "in total disagreement with the psychiatrisation of political decisions." He said that "Madame Le Pen is politically responsible for her political acts." These statements were followed up by David Rachline, Rassemblement National Mayor of Frejus, who said, "Psychiatrisation of adversaries was a soviet specialty of totalitarian regimes. Now we have the right to it in France under Macron..." (French Source: https://www.valeursactuelles.com/politique/melenchon-en-desaccord-avec-lexamen-psychiatrique-de-le-pen-99135. 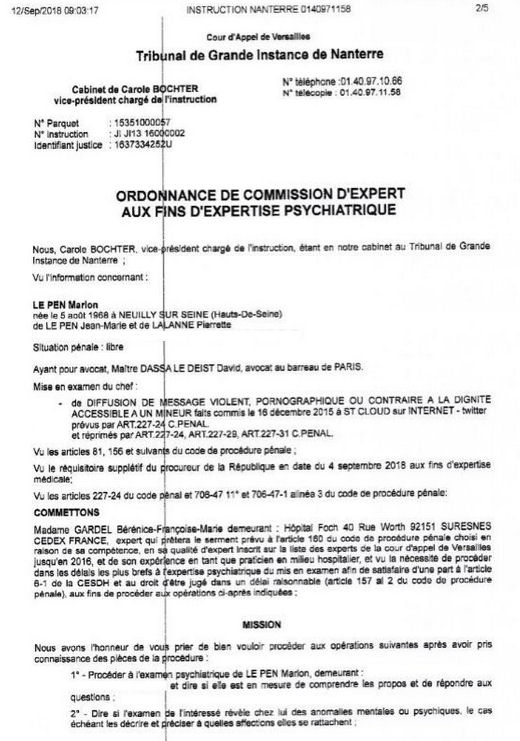 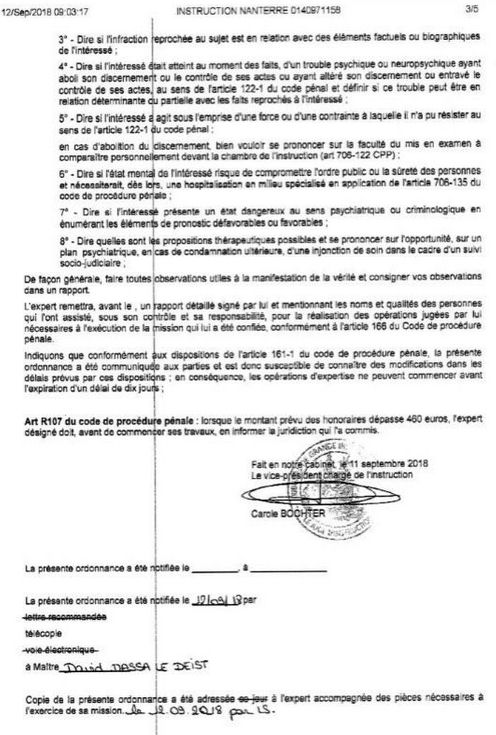 Order to commission an expert for expert psychiatric purposes

[Translation of the french document, by Sheila Newman]
Le Pen, Marion born 5 August 1968 [...]
Placed in examination
- for diffusion of messages violent, pornographic, or contrary to the accessible dignity of a minor, committed between 16 December 2015 at St Cloud on the Internet - twitter
... involving art.227-24 Penal Code
and Article 227-24, Article 227-29, Article 227-31 Penal Code
Taking into account articles B1, 156 and those following from the Code for penal procedure:
Taking into account the supplementary requirement of the Procurer of the Republic, on the date of 4 September 2018, towards medical expertise:
Taking into account Articles 227-24 of the Penal Code and 786-47 11* and 706-47-1 ..? 3 of the Code for penal procedure:
WE COMMISSION
Madame GArdel Berenice-Francoise-Marie, of Foch Hospital, 40 Rue Worth 92151, Suresnes, Cedex France, an expert who will adhere to article 160 fo the Code of penal procedure, who has been chosen for her competence, in her quality of expert inscribed on the list of Versailles Court of Appeal experts until 2016, and for her experience as a hospital practitioner, taking into consideration the necessity to proceed as quickly as possible to psychiatric expertise in order to satisfy a part of Article 6-1 of the CESDH and the right to be judged within a reasonable period of time (article 157 ?2 of Penal procedure code) so that the actions below can begin:
MISSION
Please proceed to the following actions after having familiarised yourself with the procedure:
1. Carry out the psychiatric examination of Marine Le Pen [...] and say whether she has the capacity to understand the situation and to respond to questions
2. Say whether the examination of [this person] reveals any mental or psychiatric abnormalities, and if so, describe and precise their effect
3. Say whether the infraction of which the subject is accused has a relationship with factual or biographical elements

and 5 other points of similar implication.

[1] http://www.filoche.net/2014/11/30/peut-on-le-croire-lordonnance-macron-supprime-le-droit-specifique-du-travail/. Looks like the same workplace bargaining that Australia was bullied into, which then meant that employers could profit from mass worker immigration with impunity.
[2] /node/4919