The globalised business agenda for overpopulation and open borders

Growthist corporations, their peak bodies and other similar organisations have long pushed for a big and continuously growing population in Australia. They have been crowned with success in the past ten years, but will always want more. Towards this, they are in the business of breaking down national borders and national resistance to being overcrowded. Crowding creates demand for land and products and profits for those who control resources and the means of production, whilst the rest of us pay for it. "The cows in the field will always prefer to be fewer than the farmer would want them."[1] We are all just cash cows for the growth lobby, which can buy publicity and speakers, anointing the latter as 'experts' and cementing their grip on academic institutions and the mass media, which have become as one in their investment in property speculation and population growth.

Prominent in the growth lobby, the Committee for Economic Development in Australia, CEDA, is advertising yet another population growth-pushing event: "Migration - the economic debate." This will examine "How the migration program could be reshaped to allow a larger migrant intake to build a greater Australia, How temporary migration has grown to dominate immigration to Australia; and What changes are required to the migration program to maintain broad community support."

The Australian Productivity Commission recently failed to find any evidence of migration increasing wealth or productivity, [2] so it will be interesting to see what economic excuses CEDA manages to concoct as reasons to push for even more people. It is also more and more obvious that Australians are waking up to the costs of mass immigration.

Although Australia has the highest immigration rates ever for permanent invited economic immigrants and various other 'temporary' immigrants, (see ABS-sourced graph below) the industries and individuals that benefit from rapid population growth want even more. One gets the impression that they really have no more interest in democratic or ecological limits than a machine that has no off-switch. 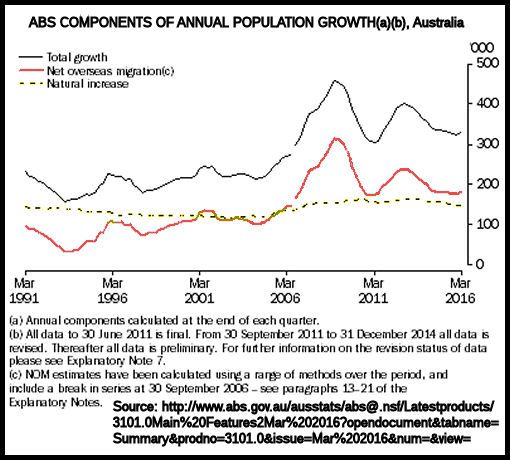 Since I identified the growth lobby in my research thesis of 2002, I have been aware that this lobby is organising at a global level, gaining more and more power. The CEDA conference is funded by "Fragomen Worldwide": "We build bridges that transcend borders. Learn why and how we do it." "Fragomen, Del Rey, Bernsen & Loewy, LLP provides immigration services globally in coordination with its affiliates around the world."

In 2008 Americans were trying to stop this jugganaut. The fact that they did not may be why today so many Americans want to elect Mr Trump, who promises to put some brakes on the import of cheap labour.

Lou Dobbs: 6/24/2008 The federal government is doing an investigation of the biggest immigration law firm -- Fragomen, Del Rey, Bernsen & Loewy. Apparently the lawyers have been giving too much coaching to employers on how not to hire qualified Americans. David Huber shows how a job resume he sent to Cisco was reviewed by Fragomen, who coached Cisco on how ignore resumes of Americans in favor of foreign workers on H-1B and green card (PERM) visas.

How did Australians lose so much control over their immigration program?

Wages and Conditions undermined:The right-wing revolution in Victorian industrial law under Kennett in 1993 set the scene for Workchoices under the John Howard government, (11 March 1996 to 3 December 2007). The Howard Government, entering this weakened industrial law and industrial relations situation, went on to widen the use of the corporations clause in the Australian constitution, which exempted corporations from many employer obligations. Up until now Australian employers had not had much to gain by importing immigrant workers because they had been required to employ them under the same industrial awards as native born workers. That meant that there was not the same opportunity to import cheap labour as there was, notoriously, in the United States. Today we are in a situation where the Australian labour market has been greatly deregulated and it is now possible to employ overseas immigrants according to individually tailored employment contracts where they have little or no bargaining power or recourse for legal protection. Coupled with the deregulation of immigration, this has created local pull factors which the Australian growth lobby has been keen both to lobby for and to exploit. (Read more on this here: Sheila Newman: Kennett population policy, numbers and flow-ons: Regional migration and industrial law under Kennett)

Land and housing: After the fall of the Whitlam Government, Australia's foreign ownership laws, including those relating to purchase of land for housing and built housing, were watered down a little bit with each new government, along with our labor laws. There was a push for higher and higher immigration, ballooning with the Howard Government. With the internet, push and pull factors were accelerated and magnified by an order of magnitude. Today we have a legion of small and big operators touting immigration for various enterprises and for Australian property development investment from all over the world. One of the major pull factors is our rapid population growth rates, fueled by mass immigration, for which no government ever sought permission from Australians. Foreign students may purchase established houses if they sell them within a year - creating even more acceleration of turnover. Frequently new suburban developments are presold to people overseas before they are even built. [For more on how this developed, see , The Growth Lobby in Australia and its absence in France, Chapter 8, Globalising the Property Market, Foreign Finance and Immigration from the 1980s. (The full thesis with appendices is available here).]

Open-borders propaganda: In Australia ordinary environmentalists have seen a rising resistance to the protection of our natural environment from the very people they thought we could rely on – The Australian Greens and various big environmental NGOs. Among spokespeople for the Greens, this resistance has manifested as a militant effort to support Lib/Lab policy of massive population growth through planned and commercial immigration by confusing refugees with ordinary immigrants, and calling any attempt to reign in immigration racist. As for the big environmental NGOs, they have become afraid to talk about population growth for fear of being politically stigmatised. Environmental debate on diverse issues has largely been taken over with top-down climate focus. In national policy, a focus on minority groups dominates what we all have in common. Behind this creeping confusion the hacking of multi-billionaire George Soros’s files has recently shown him to be behind the new-age ideology of open borders. Through Open Societies Foundations and a legion of other NGOs, he funds minority causes and flagging political parties as flag-bearers for his ideology. In Australia he has funded various pseudo-socialist groups, and members of the Greens and GetUp, which have cross-pollinated each other and also have links in the ALP, via Bill Shorten. See "Australian democracy swiss-cheesed by George Soros Open Societies Foundations". And that is only the first layer of his influence here. What motivates George Soros, the multibillionaire, to prosecute open borders? See "Population stampedes: Why does Soros push open borders?".

[1] A remark attributed to French economist and demographer, Alfred Sauvy, who did indeed write about lean cows and fat cows, although this exact remark remains a rumour.

****
From the 2006 report
The following compares a "base case" with a simulated increase in skilled migration of 50% over the "base case", which would have been about 39 000 persons" per year, see pp. xxviii

“By 2024-25, annual income per capita is about $383 (or about 0.71 per cent) higher than it would otherwise have been. Modelling by Econtech for DIMA arrived at somewhat higher figures, using different methodologies”. p. XXXII

[The period of concern is 2003-4 to 2024-25. Details for the base case and the simulated one are in appendix F. Base case assumes migration fixed at 2003-4 level (but they don't specify what number they are using). The simulated case assumes a 50% increase in skilled migration. cf p. 274. The base case leads to a migration induced population increase of 2.89 million, simulated case one of 3.72million. Both assume natural increase of 1.98 million. p. 275]

All the following is from p. 154
“Most of the economic benefits associated with an increase in skilled migration accrues to the immigrants themselves. For existing residents, capital owners receive additional income, with owners of capital in those sectors experiencing the largest output gains enjoying the largest gains in capital income. On the other hand, the real average annual incomes of existing resident workers grows more slowly than in the base-case, as additional immigrants place downward pressure on real wages.

There was also a media release at Economic Impacts of Migration and Population Growth: Media release

"Realistic changes in migration levels also make little difference to the age structure of the population in the future, with any effect being temporary." p. 63

"Some have argued that for Australia to reduce the problems associated with an ageing population, it needs to increase its level of immigration or to take measures
to increase the fertility rate. In practice, neither of these can be a panacea." p. 71

“Key points
o While population growth is likely to increase aggregate gross domestic product (GDP) and gross national income (GNI), more relevant measures are per capita income and, ultimately, community wellbeing.
o The impacts of immigration growth on GDP and GNI per head of the existing resident population are ambiguous and depend on the source, composition and context in which the growth occurred.
o Population growth and immigration (its main source) can magnify existing policy problems and amplify pressures on 'unpriced' entities, such as the environment, and urban and social amenity.
o The impacts of population growth and immigration are unlikely to be evenly distributed across Australia's population - there are likely to be both winners and losers.” p. 75

"The impacts of population growth on productivity are also complex and, in many instances, depend on the sources of that growth and the context in which it occurs.
There could be some negative impacts on labour productivity, for example, due to the dilution of available capital across a greater number of workers.
On the other [p. 78] hand, population growth could enable economies of scale (a reduction in the average cost of production) for goods and services produced and consumed
domestically. (Conversely, there could also be diseconomies of scale in some cases.) " p. 79