Kangaroos won! Please share. Thanks to everyone who emailed Californian Senators. You joined up to 100,000 people around the world who signed petitions and contacted the Senators directly. The main use - or abuse - of wild kangaroos in California is for the manufacture of soccer cleats! 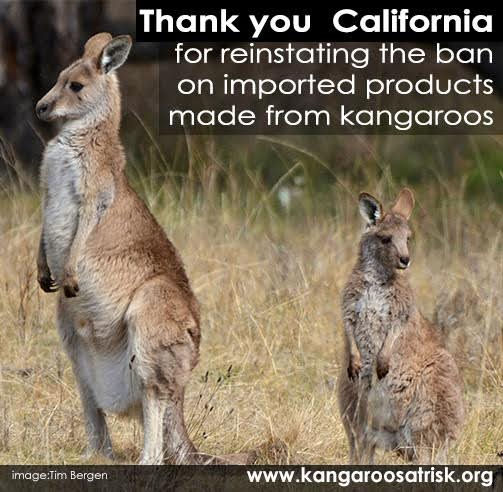 Keep an eye on the Kangroos at risk website www.kangaroosatrisk.org for more pages going up soon about ecology, surveys and the industry.

Thanks to Jennifer Fearing

Brilliant work by the amazing Californian lobbyist Jennifer Fearing, Kangaroos at Risk partner US team Humane Society US and CA, and the wonderful Australian organisations who co-signed letters to Californian senators and put out the call via their networks. It’s been an inspiring win.

In 2007, the California government has exempted the bill prohibiting the sale of kangaroo products imported from Australia. As the extended exemption ends on December 31st, lobbyists and lawmakers hired by the Australian government and manufacturers are calling to extend or repeal the prohibition.

California is currently the world's largest market for soccer cleats - with many of these made with kangaroo leather. The growing sale of kangaroo skin as shoes didn't happen if it weren't for the aggressive lobbying of Adidas, the Australian government and the kangaroo meat and skin industry in 2007 and 2010 - repealing for the prohibition which was upheld by the California Supreme Court in 1970.

California assemblyman Mike Gipson of Los Angeles has recently proposed a last-minute bill known as "gut and amend" to step-aside from the wildlife protection law. This came after the freshman lawmaker was courted by Australians.

"The Australian government have, as well as other people, approached me around this particular measure," Gipson said. "We have seen members of the Australian Consulate lobbying alongside these paid lobbyists in the building last week. People should be concerned about a foreign government's influence here that's not being disclosed to their people or ours."

According to the Humane Society of the United States (HSUS), kangaroos are "the world's largest wildlife slaughter" - threatening the population of the said species.

The Dodo reports that in the Australian states of Queensland and Western Australia, 2014 surveys show massive declines in the kangaroo population of up to 50%. Hunters have killed over 130,000 female kangaroos last year. As a result, tens of thousands of joeys have been abandoned and killed.

"I think everything about this stinks," said Jennifer Fearing of the HSUS. "I think it's all meant to be cloaked in secrecy and obfuscate a real conversation."

The Australian government reportedly paid $143,000 to lobbyists and lawmakers to activate the debate including $1,000 to Gipson.

THE owners of an Otways wildlife shelter have left a rescued joey at government office in protest over a kangaroo cull permit at their neighbour’s property. “Desperate times call for desperate measures and this is proving to be so hard on all of us,” said Ron Anstie, who runs the Carlisle River Wildlife Sanctuary with wife Carola. #e7e7e4 1px solid;BORDER-BOTTOM:#e7e7e4 1px solid;PADDING-BOTTOM:7px;PADDING-TOP:7px;PADDING-LEFT:7px;MARGIN:0px;BORDER-LEFT:#e7e7e4 1px solid;LINE-HEIGHT:18px;PADDING-RIGHT:7px;BACKGROUND-COLOR:#fff">#666666">Carola Anstie with Angel the joey. Source: Supplied They left eight-month-old Angel at the Department of Environment, Land, Water and Planning offices in Colac on Tuesday. “There are a lot of wildlife shelters around Victoria in a position like we are and we just want change,” he said In August, the Geelong Advertiser told how the #268dce">Ansties had decided to stop rescuing and rehabilitating joeys and injured eastern grey kangaroos because their neighbour had been given permission to legally cull 60 roos. They said some of the kangaroos that could be culled would most likely have been released from the shelter after being handraised over two years. The couple, with 23 years of experience in wildlife care, is calling for state government change that would see exclusion zones around wildlife shelters to prevent the allocation of culling permits. They’re also calling for properties neighbouring cull permit applications to be notified of the application and given the opportunity to appeal if necessary. Mr Anstie said there was no criticism of his neighbour or staff at the department, as both were acting well within the law. “They were entitled to issue the permit and he was entitled to apply for it, that’s not the problem. We need to change the rules,” he said. “There are no safe places to release these kangaroos.” The department’s Barwon South West Region operations director Hamish Webb said the department would “work closely with the sanctuary owners to identify safe areas for the rescued kangaroos to be moved to.” “The aim of the (cull permit) system is to strike a balance between the conservation of native wildlife and the protection of private property rights and livelihood,” Mr Webb said. “To comply with its licence, the Carlisle River Sanctuary must identify appropriate sites for the release of rehabilitated animals.” http://www.geelongadvertiser.com.au/news/geelong/carlisle-river-wildlife-sanctuary-forced-to-leave-rescued-joey-at-government-office-in-protest/story-fnjuhovy-1227529789773