Transcript and Video: Renewable Energy Bill Libs and Labor collaborate against forests against Greens and Xenophon

Last night I watched Larissa Waters and Nick Xenophon doggedly try to curb sinister bi-partisan legislation that burns down our native forests and calls this clean energy. In a final attempt to salvage some public control over this legislated attack on our native forests, they argued that the general public be ensured 'standing' to bring about complaints when they perceived breaches of these new laws. I found it nauseating to watch the arrogant demeanor of Senator Birmingham, the Minister for Education, Liberal Party, as he blocked the rights of ordinary citizens to bring about complaints under the law and as he disparaged Senator Water's attempts to bring attention to crucial matters, such as the preservation of soil fertility when forest is depleted of its biomass. Greens Senator Milne summed up the situation when she said: "You are creating an industry to drive and prop up native forest logging. You are destroying habitat, you are destroying carbon stores and you are behaving in a manner that is contrary to all of the science on what we should be doing about global warming, and you are calling it renewable when it is not renewable. It is driving the destruction of forests. That is the point. It is not about the trees being 'cut down anyway'. They are not being cut down now, because it is not economic to do so. What you are doing here is trying to put a dollar value back into logging to prop up native forest logging because it is an ideological obsession of the Prime Minister. Isn't that exactly what is going on here?"

Editor Candobetter.net: Note that the transcript here is from http://parlinfo.aph.gov.au/parlInfo/download/chamber/hansards/a3a8dfe1-27c9-4c71-a8ec-1fe1cc2461a0/toc_unixml/Senate_2015_06_23_3540_Part.xml;fileType=text%2Fxml This means that, until/if I get round to changing the links, all the links to speakers' names will take you to a dead end, however, if you go to the original site, you can find the active links. 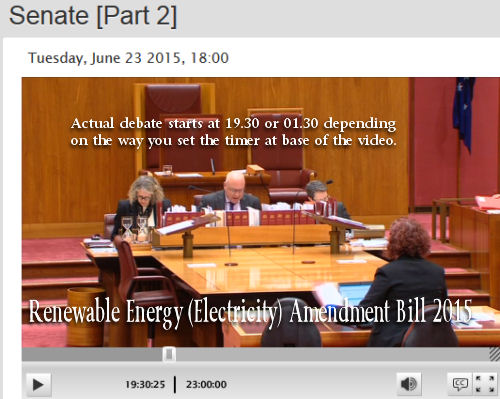 Burning forests down to "clean" or "renewable" energy is absurd, contradictory and flies in the face of any resemblance to what we know of "conservation". We are being ruled by fools, who think they can call things what they aren't. They can't see the forests for all the trees, and they are inanimate collections of wood? "In politics, stupidity is not a handicap." - Napoleon Bonaparte Forests are cradles of life, of living ecosystems that functions so we can benefit from them. They provide services for a myriad of species, from the roots of the trees to the high canopies. If burnt, these services and the lives in them would be destroyed. Why kill off the Golden Goose for short term benefits? These people so ignorant of the natural world, they simply live in a plastic environment. Australia’s native forests contain around 13,067 million tonnes of carbon, close to 24 times our annual national emissions profile (535.9 Mt). Leaving these forests standing contributes much more to the effort to tackle climate change than chopping them down and burning them. The carbon they hold, if burned, will simply add to greenhouse emissions and undermine other renewable energy sources. Who is really going to buy electricity from forest-burning companies? It's pure and destructive madness.