US-led airstrikes have killed 52 Syrian civilians in one day, a monitoring group reports. There was fighting in the vicinity, but the strike allegedly failed to kill even a single Islamist fighter. The US military, however, denies the report. Syrian President Bashar Assad repeatedly pointed out that the bombardments are an illegal intervention unauthorized by a UN Security Council resolution, and so violate the sovereignty of Syria. Republished with word 'Illegal' inserted in title by candobetter.net editor from http://rt.com/news/255105-us-strikes-syria-isis/, dated May 02, 2015

"Airstrikes by the coalition early on Friday on the village of Birmahle in Aleppo province killed 52 civilians," the head of the Syrian Observatory for Human Rights Rami Abdel Rahman told AFP.

Seven of the victims were children. A further 13 were buried under the rubble, he added. 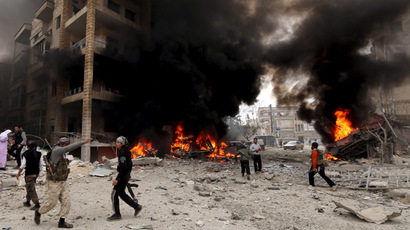 The scene was precipitated by clashes between Kurdish militiamen and Syrian rebels on the one hand and the Islamic State (IS, formerly ISIS/ISIL) terrorists on the other, about a mile away.

"But Birmahle is only civilians, with no [ISIS] positions and no clashes," Abdel Rahman continued, although raids were carried out on a nearby town, where seven militants were killed.

The US military, however, denied the report saying they “currently have no indication that any civilians were killed
in these strikes.”

US-led airstrikes have been pummeling rebel positions since September. They are designed to support Kurdish units in Syria and Iraq, who have proved effective at fighting and stalling jihadists, as in the embattled Syrian-Turkish border town of Kobani in January.

Friday marked a major escalation in Syrian civilian deaths caused by the airstrike campaign. Since September, the coalition flyovers have resulted in 66 civilian deaths. Friday added another 52.

Syrian President Bashar Assad repeatedly pointed out that the bombardments are an illegal intervention unauthorized by a UN Security Council resolution, and so violate the sovereignty of Syria. The Syrian president told Russian media in late March that the West does not have a political solution to the crisis in Syria, and said it is only interested in destroying his
government and “turning us into puppets.”