Population numbers are now a democratic issue because the two big parties and the Greens are colluding to push extreme population growth. People will vote against population growth if given the opportunity because it is causing a decline in urban lifestyle. Some of the problems it is causing is severe competition for schooling, hospitals, housing and places on public transport. People are upset by the destruction of established built environment to keep pace with this imposed population growth. If we were able to achieve zero population growth over time and reduce our per capita consumption, we would use less coal, possibly even stop needing to use it and we would never need to turn on the desal plant. It's a no-brainer really.

He says that he is running in regard to Sustainable Population Party because it would be a pity to let opportunity go by. He can offer some democratic choice to the people of Albert Park over the population issue. He can exercise the mechanisms of the party to find out what's possible when they concentrate their efforts on one electorate.

Decline in urban lifestyle a symptom of population growth

Steven thinks that people might vote for him due to their awareness of the symptoms of population growth. He gives a few examples:

There is a decline in standard of urban lifestyle:

- You can't get on tram or train in the morning.
- If you want to go from Albert Park to visit someone in Northcote, it takes an hour to get there on a Saturday afternoon. - People can't get their children into school.
- One in three houses needs to be knocked down and replaced by dual occupancy.
- It worries people to see houses knocked down.

Population numbers are a democratic issue 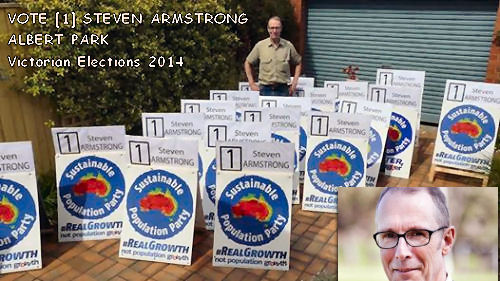 He says that, in Elwood high density happened in 1960s and 70s but that process is starting again and will proceed throughout the electorate. Population growth presents an issue of democracy in that Greens, ALP and Libs are all colluding in pushing extreme population growth. The populace don't have a choice except in electorates where the Sustainable Population Party runs a candidate.

He would like to hold the balance of power in a parliament and hold the government to carry out wishes of people with respect to population growth. He could then advocate for zero population growth. If he could achieve that, then any new infrastructure would represent an improvement in our lives rather than a desperate attempt to catch up with growing population. Our quality of life would improve.

He would like the future to be similar to that period in Australian history when successive generations enjoyed a better standard of living than the previous one. He observes that that process has stopped and gone into reverse. He says that we need to get it back to how it used to be. With zero population growth, this would be a place where people enjoyed enough space in the inner city parks, where they could get transport around the city, where the level of health care was not swamped by immigration and where housing was once more affordable.

The [natural] environment on which we all depend; can the decline be halted by stabilising population?