Human officials just seems to dream up worse and worse situations for kangaroos and carers. Wildlife activists often go to considerable expense to try to help government plan to transfer kangaroos out of the way of new roads and housing developments instead of shooting them. The usual response is that it is too difficult to transport kangaroos. The wildlife rescuers keep a watch, but usually one day they find that the kangaroos have all gone. Then someone will find some mass graves. But, when it suits the government, it seems it's all too easy to transport kangaroos, with police escorts no less. 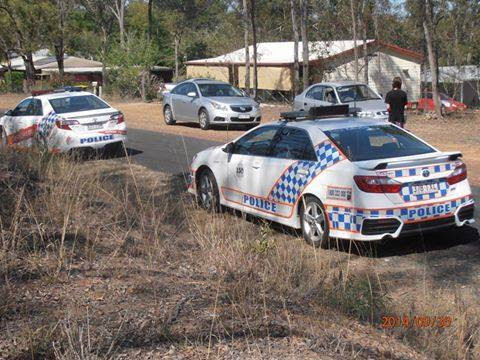 Looking at this picture of police cars outside a bush-setting home, you could be forgiven for thinking this was a stake-out in a hostage situation. But it was actually an uninvited transport team for a couple of hand-reared kangaroos, and a slap in the face for their carer.

Tonight I received two pieces of news about kangaroos that highlighted the utter hypocrisy and cruel stupidity of Australian wildlife laws. One was from the owner of a wildlife sanctuary, who described how wildlife activists had managed to rescue and transport kangaroos away from a planned cull and had wanted him to take some in. He said that, not only did he have room for them at the time, but he was happy to take them. Only, the law said that he could not accept wild kangaroos. The law said the roos had to be released into the wild. But there is less and less 'wild' left, and they had already been transported away (at considerable cost) from 'wild' that was being turned into housing lots. 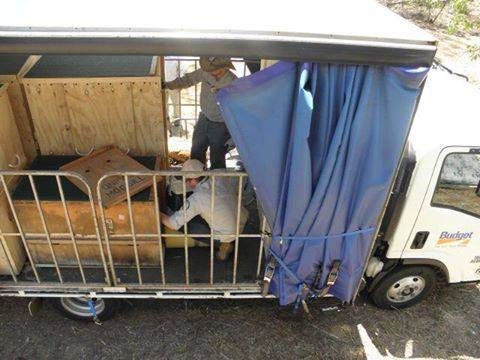 The second piece of news was that Queenslander Colin Candy's pet kangaroos had been seized in another raid by the police and transported away in crates to the 'wild'. Colin is beside himself because he had rescued these kangaroos and raised them. They have never known the 'wild', with the exception of a little bit of it at the end of his back yard, which has a few acres of bush.

"I travelled to Charleville in July 2009, and approached several shooters and the kangaroo abattoir, asking if someone would save me a joey. But everyone knocked me back saying that that they kill the young and leave them in the paddock.

While driving around Charleville I noticed a sign, wanting to buy kangaroo meat. So I phoned the owner of the sign, and he told me that he also shot roos and if he happened to come across any joeys that he would save them for me.

Next day he phoned to say that he had 2. So I gratefully picked them up and brought them back to Hervey Bay, where they bred, and I hand raised half of the joeys while leaving half with their mum.

We finished fencing this place at Apple Tree Creek late in March 2014, and I caught the hand raised kangaroos and relocated them here, while I couldn’t catch the kangaroos raised by their mum. Those kangaroos I gave to a wildlife park in Maryborough on the 1st April 2014.

None of the kangaroos have any idea, what it is like to live in the wild. As you have stated, kangaroos in Qld don’t get to live much past two years of age, with most being shot before they have even reproduced." (Colin's communication to the author of this article.)

Within days the same agency that had forced the removal of Colin's kangaroos, refused a request to remove a kangaroo involved in an incident, where a 67 year old man had been injured. A stand-off has developed between Bundaberg Regional Council and the Department of Environment and Heritage Protection (EHP).

"EHP is not responsible for managing or removing the wildlife itself," he said.

But Bargara Divisional representative Greg Barnes said Wednesday's incident at Apple Tree Creek, which saw EHP officers remove five pet kangaroos from private property, highlighted that native animal issues were the responsibility of the EHP." Source: "Council and state fight over who will kill the 'roo"

In 2001 Mr Candy had two other kangaroos removed from his premises, Mitchell and Marcy. Both kangaroos died soon after they were removed. See article here.

With his first rescued kangaroos, Colin initially obtained permits as a rescuer, but let them lapse after a few years. No-one seemed to object.

Then suddenly in 2001 he became the object of authorities determined to remove those kangaroos from his premises. He lost his home fighting for them in court. How could any authority allow this to happen to someone who was trying to help our wildlife? There do not seem to be any accusations of cruelty or complaints from neighbours that would have precipitated these actions. 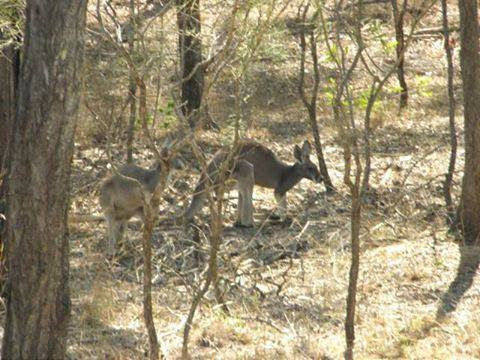 Although Colin has since applied for permits, he says they have been refused, on the grounds that they are only given to rescuers - who are expected to release them into the bush. Mr Candy said that he was trained as a paramedic and that


"Kangaroos are treated like pariahs in their own country, so I don't understand why I can't keep them. They are harmless beautiful creatures."

We live in endlessly expanding cities where our governments are forcing all of us into smaller and smaller spaces and forcing our wildlife into oblivion as they pave over natural habitat. As mentioned above, kangaroos in Queensland, the state where Colin lives, have an average life expectancy of only two years because they are shot for kangaroo meat. As a result of all the big males being taken, the kangaroos there are observably much smaller than in Victoria, for instance, where there is no roo-meat industry (although not for lack of lobbying). Not just the Queensland government, but every state government in Australia promotes fictions of how kangaroo populations are ballooning when it is actually our own that are forcing them from the bush onto streets. The ACT government regularly engages in wholesale kangaroo massacres on elaborate pretexts. 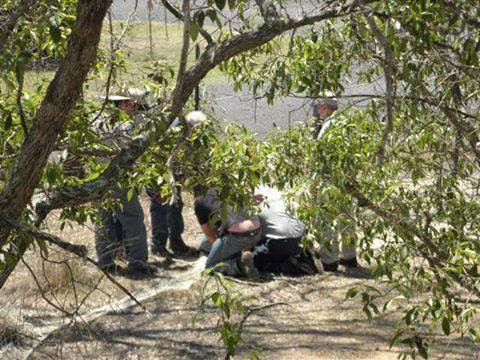 And now four female and one male red kangaroos that a kindly Australian called Colin Candy went out of his way to rescue when they were little have been rudely taken from him because he doesn't have a permit. This in a state that authorises industrial scale hunting of kangaroos and the abandon or killing of their young at foot or in pouch. As if anyone involved in this raid really cares about Colin's kangaroos - or dared to speak up if they did. But Colin cares and the kangaroos know nothing else. And he dares to speak up. So we must also. Because the whole thing sounds completely stupid, as well as cruel.

Please speak up for Colin and his kangaroos and for all kangaroos by emailing the following parties. Say something about the population growth that is causing the disturbance of our kangaroos and about the sheer insanity of prosecuting a man who has tried to help abandoned joeys who will now be at risk of being shot in the wild, like their mothers, in the unlikely case that they survive alone in the bush without any relationship with the local roos, who tend to chase unfamiliar roos off their territory.

Minister EHP Andrew Powell (this bloke has the power to order the return of the roos)
Environment[AT]ministerial.qld.gov.au

There is 108-hectare of land currently under planning minister Pru Goward’s determination for large-scale housing/industrial development, and sits just 2.5 kilometres west of the CBD in Byron Bay.

The Echo newspaper understands that Sydney-based developer Terry Agnew is by far the largest shareholder at around 80 per cent, along with other local investors. The matter is being referred to the Independent Commission Against Corruption (ICAC)

The Australian Koala Foundation raised concerns that koala populations were in decline across Brisbane, Redlands and Logan. During Save the Koala Month in September the AKF called for tighter legislation to protect the marsupial, which is threatened by urban development. But Environment Minister Andrew Powell assured that existing legislation was adequate, saying developers were required to offset clearing of koala habitat by planting new trees. Existing legislation was hardly "adequate" as "offsets" result in net habitat loss!

There's all sorts of reservation, protection, conservation schemes, but the housing industry is like a huge tsunami of urbanization, destroying everything in it's way. It leave a wreckage of concrete, traffic and loss of wildlife, but with little economic activities in Australia - due to the facing mining industries - housing and population keeps growing relentlessly and lethally.

Letter to QLD Minister for Police re kangaroo management

11th October 2014 Jack Dempsey Minister for Police Member for Bundaberg Dear Mr Dempsey, I have written several emails to Environment Minister Powell to no avail, and I am hoping that as my local MLA, you may be able to assist me to retrieve my pet red kangaroos please. I am an old man, who lives on his own and my only company are my pets, whom I treat as family. Where as red kangaroos, they are only vermin to Minister Powell, so how the Judiciary and the Police can be conned into assisting the EHP to steal my pets is beyond me. I am threatened by the EHP with prosecution, for keeping so called protected wildlife alive and healthy. Well I look forward to my day in Court Mr Dempsey. Although there does seem to be two sets of rules in Queensland, double standards, you might say. “Of all the creatures that were made, man is the most detestable. Of the entire brood he is the only one--the solitary one--that possesses malice. That is the basest of all instincts, passions, vices--the most hateful. He is the only creature that has pain for sport, knowing it to be pain. Also--in all the list he is the only creature that has a nasty mind.” - Mark Twain's Autobiography http://www.twainquotes.com/Cruelty.html Time is of the essence Mr Dempsey. Yours sincerely, Colin Candy 5 Emmitt Court Apple Tree Creek Q 4660 PO Box 349 Childers Q 4655 PO Box 5408 Torquay Q 4655 [Phone: deleted from this republication]