Australia's net overseas immigration absolutely dwarfs any asylum seeker or refugee program by about 280,000 to 20,000 people, yet almost no-one is blowing the whistle. (Planned immigration for 2013-2014 is 190,000 alone. The permanent migrant worker program called “Skilled Migration” is now completely out of whack with Australia’s current and future jobless numbers. "Whether you’re one of the many young people concerned about your future job and career prospects, or how you will purchase your first home, or an older Victorian concerned about the type of Victoria we will leave behind for future generations; Victoria First is taking up the fight," says MP, Kelvin Thomson, about this new organisation formed to fight for Victorians' democratic rights. 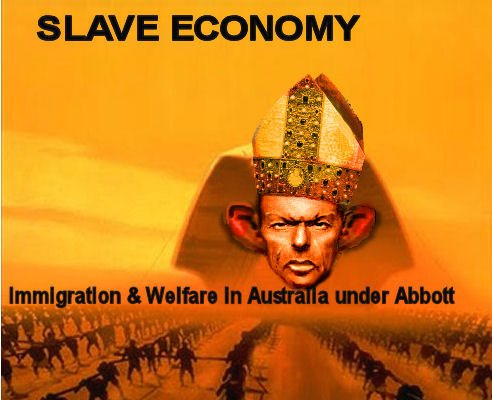 John Masanauskas reports in the Herald-Sun on 31 January that last year 129,000 permanent migrants arrived under Australia's permanent immigration program. (That's not counting family reunion and business immigrants). The largest occupation was cooks – more than 8000 got permanent visas. Hairdressers (1500) also made it into the top five categories. The other top five were accountants (5700), software engineers (2160) and IT business analysts (1550).

The Government says the welfare bill is too high, and must be cut.

How do you cut welfare if there are no jobs?

But how is it to be cut unless these people have jobs that they can go to? And what about the workers at Ford, Holden, SPC Ardmona, Qantas, and BP, who face the prospect of losing their jobs sooner rather than later? The market theory, enthusiastically promoted by this Government, is that these workers can be re-trained for, and should be prepared to work in, other areas. This theory falls flat on its face when every year we bring in 129,000 people under the permanent migrant worker program, rather than training up, and giving jobs to, our own cooks, hairdressers, and accountants. The size of the Skilled Migration program is a recipe for growing and long-term unemployment, social disadvantage and hardship, and an outsize welfare bill. 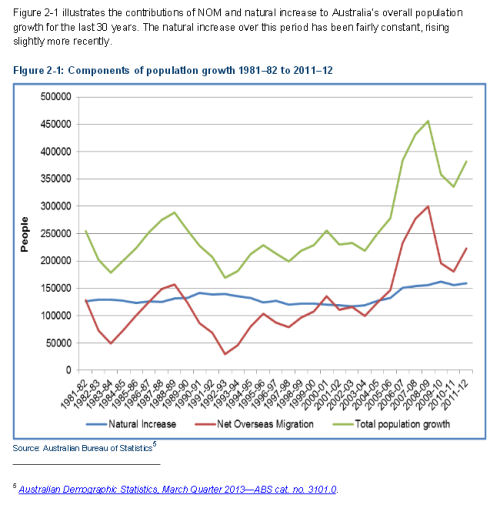 To fight this public policy craziness, Kelvin Thomson has set up a not for profit non-government organisation called Victoria First. Their first meeting as an incorporated organisation was yesterday, Saturday 1 February 2014, at the “Community Room” at Edinburgh Gardens in Fitzroy.

Guest speaker, Dr Ernest Healy of the Centre for Population and Urban Research of Monash University, gave his talk on "Melbourne – Heading for 'CARmageddon?” The subject was the problem of increased car ownership and dependence as Melbourne's population increases. The problem of overloaded public transport and gridiron traffic is one of many terrible problems Australians face with overpopulation. It was not, however, the only problem canvassed at the meeting on Saturday. Many other matters were put to the open mike in a packed room.

It will not be easy to unite and organise Australians in the face of the disorganising effect of mass media and government propaganda, but Thomson is showing leadership and attempting to empower. For more grass roots democracy avenues in Victoria check out some other anti-growth activists here.

Kelvin Thomson encourages all Victorians, young and old, to come to meetings of Victoria first and find out more about the problems of overpopulation. He says,

"Whether you’re one of the many young people concerned about your future job and career prospects, or how you will purchase your first home, or an older Victorian concerned about the type of Victoria we will leave behind for future generations; Victoria First is taking up the fight."

How offensive and absurd that Australians are incapable of being trained as hairdressers or cooks? In Victoria there have been $billions cut from the TAFE budget, and university fees are prohibitively high.

Hairdressing and cooking are not highly sophisticated skills, so how could our young be overlooked? The skill shortages is a myth and is really generic "growth" scheme towards "big Australia", and a way of luring foreigners here to propel more housing for developers.

Former PM John Howard recently confessed that his tough stance on asylum seekers, and "border protection", was really about supporting economic immigration, and hiding the fact that most people who come to Australia are arriving by plane.

It's quite evident that our government is intent on creating a bigger GDP through population growth, at the cost of services, living standards, jobs, health care, education and training and human welfare. We can only descend further down the economic ladder towards a third world level.

How to create secure employment for Australians

Anarchist Media Institute Although it goes against the grain, I've decided to give Murdoch's Minion Tony Abbott some unsolicited advice about how to save his political bacon. Leaving job creation to market forces creates the political instability that will see Turnbull, like Gillard before him, catapulted into Abbott's shoes within the next 12 months. Faced with first term political oblivion, Abbott could embark on a job creation journey that could see millions of potentially unemployed and unemployable Australians find regular, secure, worthwhile employment. All the Prime Minister, The Right Honourable Mr. Tony Abbott has to do is to convince his parliamentary colleagues to pass legislation that sets aside 1% of Australian worker's superannuation contributions into a fund to provide seeding capital to establish co-operatives and collectives. Co-operatives and collectives have the capacity to create an alternative economic system that is not dependent on government support and that can work towards breaking the monopoly that is exercised by privately owned corporations whose major responsibility is to their majority shareholders, not the country as a whole. In an era when government owned or supported companies are being phased out and replaced with privately owned companies who have Buckley's chance of satisfying real community and national needs, the Abbott led government could, if it removed its ideological blinkers and supported the establishment of co-operatives and collectives, solve the many problems that have been thrown up by structural adjustment over night. Dr. Joseph TOSCANO / Spokesperson / Anarchist Media Institute Level 1/21 Smith Street, Fitzroy VIC 3065 Tel: 0439 395 489