This coming Thursday, March 28, 2013 there promises to be an edge of the seat Court Hearing about the future of a development known as "Rainbow Shores 2" that residents of Rainbow Beach have been battling against for a number of years. The State Government issued a planning refusal in 2009. Yet the proposal keeps coming back, like a bogeyman. 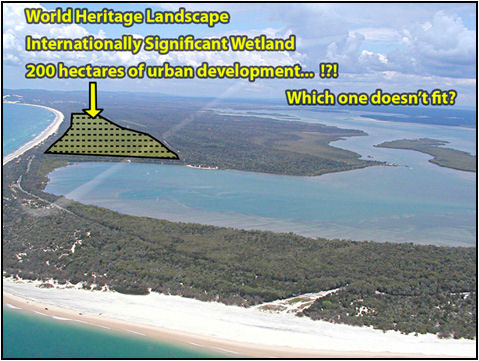 The development targets the edge of world heritage coastal land, walking distance from Fraser Island. We are talking about the need to protect public land. Inskip Peninsula is part of the Cooloola Coast - the last island of biodiversity of its kind in Australia.

Questioning should attempt to reveal if and how Gympie Regional Council has justified support for a recent amendment to permit some urban development on the heritage area, despite the fact that its publicly notified Draft Planning Scheme supports NO urban development on Inskip.

Ordinarily councils are known for their superficial and even inscrutable responses on questions of development eroding protected areas. In court, however, Councilors and council employees cannot take take the same refuge in officialdom, buck passing and obscurantism.

People are urged to attend this case in order to show their support for a legal system that supports the law and protects public land.

The hearing will be at the new District Court buildings located on George St. between Roma and Turbot Streets.

It will begin at about 9am-10am. The barrister's cross examination will take place soon after the hearing begins, so the concerned public will not have to wait for long. The cross examination will probably be over before lunchtime at 1pm, although there may be some questions emanating from other parties. Submissions to the court from the parties involved will follow.

Citizens are urged to show their interest and involvement in their own government, land-use planning and administration and the exercise of their legal system in order to keep and improve their rights in Queensland and Australia.

About the area in question

The Cooloola Coast is the only remaining expanse of natural open space and intact environment left within coastal mainland S.E. Queensland.

The social and ecological value of this increasingly rare coastal resource is immense.

Numerous species, once prolific along the S.E. Qld coastline, now depend upon the size and integrity of this remaining natural area for their ongoing survival. Many of the natural forms and processes within the locality are globally unique and significant in their own right.

A lot of people value the respite the Cooloola Coast offers from the hectic pace and clamour that is growing across SE Qld. For many good reasons they do not want its tranquility ruined by urban expansion.

Consequently there is also enormous economic value in the genuine preservation of these remnant qualities.

A rare and valuable intact coastal landscape would be lost.

The existing urban area of Rainbow Beach has ample capacity for development of increased visitor numbers, local business and community facilities. Why repeat the pattern of coastal overdevelopment in this remaining special place?

To read more, and offer support, go to http://www.saveinskip.org.au/

Environmentalist, Greg Wood, has been running the defence of Inskip on a shoestring. Please consider helping him financially. http://www.saveinskip.org.au/docs/Donation_form.pdf