Retitled on 4 November 2011 to highlight the megafauna focus

In 1994 three French speliologists (cave explorers) found the Chauvet Pont d'Arc cave, which turned out to be an extensive underground neolithic art gallery and a kind of visual Noahs Ark of lost species of the last great ice-age around 34,000 year ago. By comparison, the famous cave art of Lascaux[1] is about half as old. Werner Herzog's film of this great ecological time machine is a once-ever. 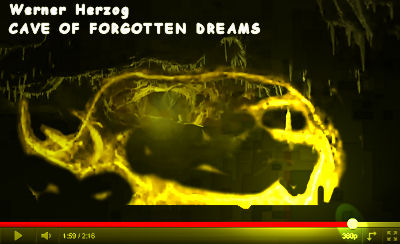 Soon after it was found, the government resealed the Chauvet cave with a massive armored door so that, from the outside, it looks like the entrance to a bank vault mysteriously set within a wall of rock, overlooking vinyards in Ardeche. In a kind of electronic open-Sesame, entry is gained via a code typed on a keypad.

The French Ministry of Culture gave veteran film-director, Werner Herzog,[2] special permission to enter the cave and make the documentary. His permitted time was limited to hours at a time over a few days, I believe, and he was only allowed to bring in three other people. The crew was might only use battery powered flat lights and they had to keep to a narrow raised pathway. Internauts can follow the same path in a virtual interactive page. (If you don't understand French just be aware that hovering your cursor or clicking on a highlighted square will bring up further detail.)

Herzog has made a wonderful film about what humans living over a period of thousands of years in the time of a great ice-age left behind them. The art and informed scientific commentary give an empathic audience the material to bridge with their imaginations a gap of more than 34,000 years and to walk between towering glaciers with ancestors who hunted megafauna. The film brings to life (in 3D) a time when seas were 300 feet lower (91.44 meters) and people and other animals could walk from Germany to Britain. I have always valued the idea of the space and freedom and self-sufficiency of the neolithic and would have liked to have lived at that time. The cave paintings were superbly lively and evoked an era when humans identified as part of the local ecology which included huge cave bears, cave lions, wooly mammoths and wooly rhinoceroses in Europe, all of which are depicted in the cave.

In the film, scientific specialists interpret the paintings and the times. One of them went into the weaponry used for hunting, demonstrating the importance of spear throwers. These neolithic people were tall and amazingly fit and strong to be able to live in the extreme cold and to hunt and live among the huge creatures of the time. The paintings depict the non-humans as real personalities. An approach through naturalistic art, which everyone can understand, makes this a meaningful diorama of neolithic culture. 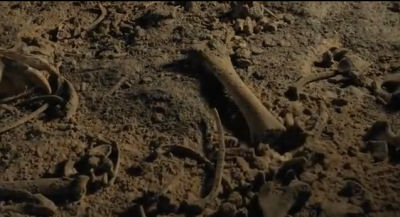 None of the many bones on the floor were human. It is thought that this cave was lived in by various animals over centuries and that humans used it for ceremonies, but no-one is sure, of course. There is a wolf paw-print besides an eight year old boy's footprint in the earth in one of the cave areas, but the two could have walked here 5000 years apart or side by side on the same day. No-one can say.

It saddens me that if Australia continues to "develop" the territory and society of her aboriginal peoples, inevitably no Australian will any longer have a choice of that other lifestyle, which still carries valuable information about a wonderfully healthy way of relating to nature and to each other. Changing their remaining land from shared territory to individual titles, as begun by John Howard, will effectively break up these peoples too, reducing them simply to a part of the flotsam of broken tribe remnants arriving as 'settlers since 1788 - the poor from industrial Britain, the Continent, Asia and Africa. Europeans may understand the tragedy of reducing everything to industrial life-style even less than Australians. I remember giving a lecture to contemporary French history students at the University of Dijon where students expressed shock that Australian aborigines wore no clothes in indigenous territory in the north of Australia. For them this was a sign of poverty. Living 'outdoors' was a sign of 'backwardness'. Would those same students have felt the same way seeing Herzog's film of Chauvet Pont d'Arc? 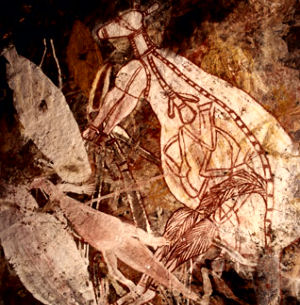 The Australian Aborigines are thought to have crossed over when sea-levels were very low between 60 and 40,000 years ago, more or less direct from Africa. The oldest neolithic art in Cave of Forgotten Dreams was dated round 34,000 year ago. Until British settlement in Australia the populations there were all still practising neolithic lifestyles and showed no immediate interest in beads and baubles; they seemed to have too much self-respect and to be self-sufficient without notions of individual wealth. This culture is still alive, hanging by a sinew. It depends on the retention of land and a social envelope that does not impose growth in population and material production ...

Also fascinating in Herzog's film was the introduction of the concept of 'fluidity' between humans and other animals which some of the cave painting and other neolithic art seems to demonstrate, where it was supposed that humans believed that combinations could easily occur between themselves and other species. So there exist figurines of lion-headed humans etc. Of course the ancient Egyptians had a panoply of animal-headed gods and Greek myth contains half-human monsters. Statuettes like the Venus of Willendorf seems to have been very common items in the Neolithic. What was the basis of these statuettes, I wonder? Fertility figures? They look like old women with diabetes to me, or, disturbingly, obese women held captive and fattened for some awful purpose. "How," asked a female friend, "Could women of the neolithic period get that fat?" Was there enough cereal? Did they survive winter on huge amounts of fat sitting immobile in caves? The mind boggles...

In the meantime, my mind retains those wonderful pictures of megafauna and of a time more fabulous than that of any comic superhero.

[1] For the cave art of Lascaux, visit this wonderful interactive site where you can move around within the caves at a touch of your mouse
[2]Werner Herzog as a director was better known to me as the German maker of Nosferatu (1979), a poetically filmed interpretation of the lonely vampire myth and the plague in Europe.