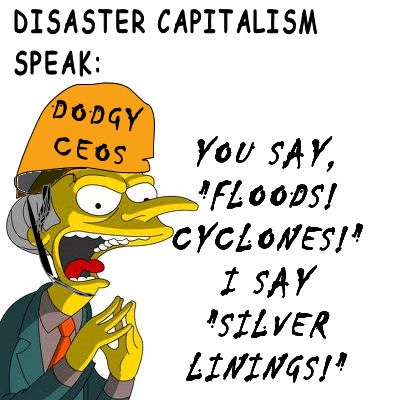 Australia's community spirit has been on show during the floods crisis, yet some have used the floods to advance their own interests. And it's not just the odd looter.

Big bank 'chief economists' and business 'economic consultancies' form part of this well-funded campaign. The Australia Institute notes that bank profits are now running at $1,000 for every man, woman and child in Australia. The lazy way for big business to make more profit is therefore to increase its customer base, and to drive down wages by importing more pre-trained workers. It helps alleviate training and apprenticeship costs. But would a further rush of skilled migrants help us to clean up and re-house people after the floods – or just add to the problem?

“Australia’s migration program actually exacerbates skills shortages. A dog can never catch its tail,” says Stable Population Party convenor William Bourke. “The real objective is to feed big businesses’ insatiable desire for more consumers and cheaper labour, not to help flood victims. Of course if an immigration category is created for flood recovery skills, the next thing is that some employers will be demanding migrant doctors and hairdressers to service them. It’s a vicious circle. If genuinely required, the cost to our society of training an extra Australian is far less than that of accommodating a skilled migrant with dependents.”

He adds “Our already record high immigration has been a major cause not just of infrastructure shortages but also skills shortages and government budget deficits, and hence has eroded liveability in our major cities.[1]

The Department of Immigration's own research finds that if continued it will impose even greater adverse impacts on the quality of our natural and built environments.”[3]

John Roles, an experienced manager in Queensland’s energy construction industry said that importing skilled migrants to help the flood crisis “is simply wrong headed. It takes more than 20 years for the average new migrant to register a surplus in the construction of both public and private infrastructure. Increases in immigration therefore exacerbate the shortage of construction skills in the short and mid term. Yet reducing the immigration level by 50,000 people for a single year would immediately free up funds and workforce for rebuilding.”

Dr Jane O’Sullivan of University of Queensland agrees and notes “A typical dwelling takes 2-4 person-years of labour to build (including off-site manufacturing and materials supply).

Additional infrastructure per person is at least as great. Since in fact only a small fraction of the skilled migration intake are construction workers (60% of this intake are not even workers, but family members of skilled migrants), the labour and housing deficit created by their immigration would last many years.”

She adds that “In flood affected areas, rents are already climbing cruelly, due to demand from displaced families and from tradespeople who have moved in from other regions for the recovery period. The knock-on effect will see rents pushed up throughout Brisbane, putting disadvantaged families under even greater strain. The last thing wanted is an influx of more families into this region.”

As well, says Bourke, “With our $770b infrastructure deficit (according to Infrastructure Partnerships Australia), it is highly inappropriate to burden our already overloaded infrastructure with more people. At a time of inflationary pressures through increased food prices, we should try to minimise further upward pressure on land, rent, water and energy prices that population growth inevitably creates. Recent experience should teach us the folly of letting population pressures lead us to build on flood-prone areas; and also that more people means a far higher cost per natural disaster,” he concluded.

Our so-called "aging population" is a result of big families in the post-war era, and post war immigration. For every boost to population, there is inevitably a corresponding demographic result further down the track. Adding people now, through immigration, will cause the hump to continue, and thus we end up in an addiction cycle. Lack of skills, high number of aging, need economic stimulus, housing slump? Add more people! We get an addiction cycle and our fates become sealed by culture, economics and what habitually worked in the past. Probably the tipping point of famine, peak oil, overpopulation, climate change has already passed. Humanity's momentum will continue to drive the cycle to completion, and a new Age in our planet that will not include humans - or only a few.

When it is so obvious that people have settled in places that are flood prone, which usually means there is a shortage of more suitable places to settle which means overpopulation and then you hear these opportunists howling for more migrants, it is extremely predictable and annoying.

How is it predictable that anyone can gain from so harming us?

To the contrary, I don't see why it should have been predictable at all. That any group is able to profit, and not lose, from making fellow members of its society society on average poorer, as increasing the population surely must in any country with finite resources, is a sign that the economy must be highly dysfunctional. Any economy which allows people, such as land speculators, who produce absolutely nothing of any use to any other member of society, to profit so greatly, cannot be healthy. The natural disasters that Australia has just endured has made a bad situation even worse. Those who, in the past lined the pockets of speculators and developers with their own wealth (if not the wealth they obtained from others) have lost doubly from the damage to their houses and other personal possessions that they put onto flood-prone land which they paid inflated prices for. It is past time that the laws were changed so that only those who contribute substantially to society are able to prosper. Those, who today profit from harming the welfare of others, should consider themselves lucky it the rest of society shows itself willing to support them with the equivalent of today's Centrelink unemployment benefits. If that were done, the pressure on our political leaders to impose population increases on the rest of us would no longer exist.

Immigration Minister Chris Bowen has rejecting a rising tide of criticism directed at the policy of European leaders who have condemned multiculturalism as a failure- as he unveiled a new multicultural strategy. He said we have a "unique, Australian multiculturalism, built differently to other models around the world." Really? www.theaustralian.com.au/national-affairs/chris-bowen-unveils-new-strategy-on-multiculturalism/comments-fn59niix-1226007226044 He wants to increase support for the Australian Multicultural Council, which will now act as a "champion for multiculturalism". It sounds like another population myth, to support mass immigration. Our own brand of multiculturalism is just the same as those in Europe, but wearing different underpants! We are already multicultural and represent many different ethnic groups, and all sorts of diversity. This sounds like another population myth - that we need more multiculturalism! What we need more than ever is a way to boost unity, and a strong Australian identity. We don't need more immigration to do so. Ongoing "multiculturalism" is a euphemism for mass immigration to support "big Australia", something that we don't need considering the myriad of global and local unknowns and threats this century. Migrants should integrate. We can't have a social "glue" that also celebrates separateness and diversity. It's an oxymoron. Our western liberal values are completely at odds with Islamic draconian ideals. Why should we "tip toe" around our attitudes, our words, and values? He should be aware that most European countries now regret their multiculturalism agenda and are now paying for it with high social security costs, slum neighborhoods, social division because of non integration. possible home-grown terror cells. There is a rising anti-immigration movement in Europe, and "Europeans" are becoming a minority.

on 17 Feb 2011. The following has been edited because some of the assertions and their tone could put the author (and candobetter.net) in line for defamation. We therefore communicate the names of the people who have been nominated for the award, but in some cases leave readers to find out more for themselves. Those, who wish to, may view the original PDF document linked from the Awards Page of the web-site of the Australia First Party, Victoria]

THE ORDER OF THE TOAD

[Ed. terminology here a little strong and we don't have the background to know if your generalisation would stand]