I would rather be an optimist than a pessimist, said the Dodo bird

A common line of argument from those who favor population growth in Australia is that it's all a matter of optimism versus pessimism, and that environmentalists are much too negative. But there are situations where optimism would be better named meglomania. 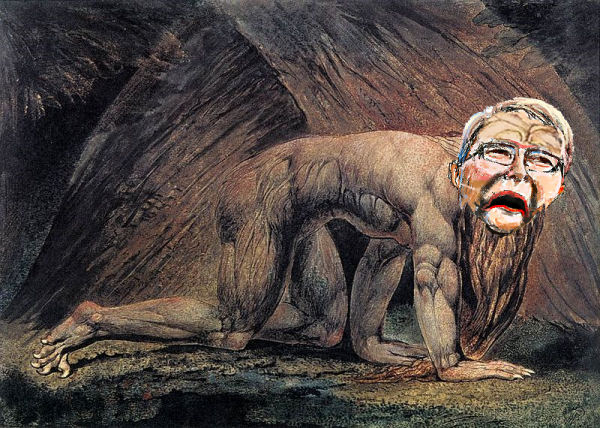 Last words of the Dodo

Weren’t, “I would rather be an optimist than a pessimist,” the famous last words of the dodo bird?"[1]

In Rudd welcomes 'big Australia'
Rudd talked about being optimistic about Australia's growing population, which he is encouraging in the face of growing democratic panic as the public feel the adverse consequences.

Because of this new parties are forming with policies to stop population growth in Australia.

A common line of argument from those who favor growth, such as economist Glenn Withers, is that it's all a matter of optimism versus pessimism, and that environmentalists are much too negative.

Ex-journalist, now Labor politician, Maxine McKew, recently told the Australian Q & A television show that, since we would all rather be optimists than pessimists, she was going to take the optimistic view on Australia's carrying capacity and on the livability of larger cities, and that to her mind ended the argument. 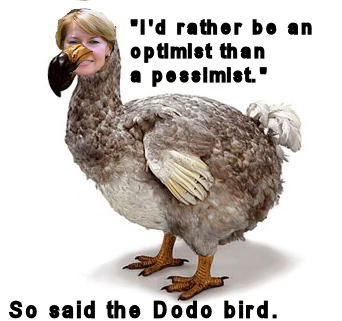 Too bad if people in Australia cannot afford water and heating or shelter - let's all remain optimists! What a negligent attitude from a person responsible for the conditions which may lead to starvation and exposure for so many.

"Doomsayers have always been wrong" say the cheerleaders of the growth lobby. Mark O'Connor identifies this attitude as coming from their vast ignorance of human history, and compares their glibness with the glibness of the Chaldeans telling Nebuchadnezzar "O King, live forever" (Book of Daniel, 3.9).

Nebuchadnezzar was an infrastructure and growth obsessed King who believed that his kingdom of bricks and mortar, and their financial foundations, would be eternal. Like Australia's Prime Minister and State Premiers, he thought he had the solutions to everything and that anyone who disagreed was not worth listening to. In the Bible, the political opposition was symbolised as a new religion, whose prosyletisers Nebuchadnezzar put down by various brutal means. The fact that an organised political opposition had formed is indicative that Nebuchadnezzar's wealth and power were based on disempowering his constituents. His key advisors learned to tell him what he wanted to hear or face the consequences. The king had dreams that were interpreted as warning him that his kingdom would crumble as would others that followed. His response was to built a huge gold statue of himself at public expense.

But Nebuchadnezzar's grandiosity was exposed for the madness it was. He was driven out of his own city and spent seven years living like a wild animal. [Ed. Apologies to wild animals who seem to lead blameless lives in reality, especially compared to politicians.]

Mark O'Connor says that one thing experience has taught him is not to trust anyone who seeks to reduce complex factual issues to optimism versus pessimism.

Vlad Stoikovich, who was recently on a population 'debate' on SBS's Insight program writes,

"Population boosters often paint the population debate as being one of HOPE verses FEAR. They, being on the side of hope, see themselves as visionaries with an unshakeable confidence in the creativity of mankind. On the side of fear, they group together -

“the villains”: NIMBYs, bigots, scaremongers and conservationists, people resistant to and fearful of change, pessimists whose innate distrust of mankind is their greatest failing.

To present the case for and against in such a light is clearly just another case of moral manipulation, an attempt by boosters with vested interests to hold the moral high ground at the expense of reasoned, logical debate. So in the interest of fairness let’s reverse their proposition and assume that boosters are on the side of FEAR and population stabilisers the side of HOPE.

Could such an argument be valid?

We only have to analyse booster arguments to deduce what it is they FEAR:

So what do stabilisers HOPE for?

* We HOPE for a world in which our children can enjoy the same abundant natural environment and species that we enjoy today.
* We HOPE for an economic model which takes into account the full environmental, social and cultural impacts of our choices.
* We HOPE for an Australia whose growth is based on doing things smarter, more productively and in a way which gives all Australians the opportunity to participate and prosper.
* And the list goes on!

Boosters believe in the boundless ingenuity of humanity, they put their faith in the great scientists and machines of tomorrow, that will enable us to consume and grow without limits. But ingenuity comes in many forms and it should be recognized that before every great leap of science comes an even greater leap of philosophy . Perhaps the ingenuity they so crave is not to be found in their grand technological visions of tomorrow, but in the simple philosophical shifts now happening right under their noses."

A Public Forum on Population Growth and Climate Change Saturday July 3rd 4pm to 6.30pm Surfworld Sport and Rec Centre Torquay Amidst all the political debate in Australia, population growth has become inextricably linked to economic growth and our future prosperity. If the climate change problem is going to be addressed successfully, the global population growth rate cannot be ignored. How necessary is population growth? Is growing the Australian population sustainable? Kelvin Thomson MP, Member for Wills Mr Thomson has in recent months spoken in Parliament and in public about his desire to put the brakes on Australia’s - and the planet’s - population growth rate. His 14 point plan provides concrete details on how this could be achieved. Mark O'Connor Author of 17 books, including This Tired Brown Land, a study of sustainability, population, and ecology in Australia, and Co-author of Overloading Australia: How governments and media dither and deny on population. Many ABC talks, including six on Ockhams Razor. Dr. Bob Birrell Bob is the director of the Centre for Population and Urban Research at Monash University in Melbourne. He is one of Australia's leading social scientists. Bob is joint editor with Katharine Betts of the quarterly demographic journal People and Place published by CPUR. www.sceg.org.au __._,_.___

This is a pretty prophetic cartoon! Rudd sent out into the wilderness like Nebukanezzah! How close is candobetter.org to the horses' mouth?

Australians are culturally intolerant of arrogance

Australians are culturally intollerant of arrogance. Rudd's euphoria, then reviews, then committees, then promises, then cash splurge, then stuff ups, then excuses, then dummy spits..collectively invited a natural sunset clause with the Australian electorate. Cumulatively when spin is not met by action the Australian bullshit detector starts flashing and beeping loud! And it beeped loud! Doesn't take inside factional intuition to smell bullshit, even from casual observation beyond the black stump. But don't accept Labor's coup method. It was undemocratic. So where the hell is 'Nebukanezzah'?

By the way, this is who Nebuchadnezzar was

Nebuchadnezzar was a ruler of Babylon in the Chaldean Dynasty, who reigned c. 605 BC – 562 BC. According to the Bible, he conquered Judah and Jerusalem, and sent the Jews into exile. http://en.wikipedia.org/wiki/Nebuchadnezzar_II While boasting over his achievements, Nebuchadnezzar is humbled by God. The king loses his sanity and lives in the wild like an animal for seven years.

Well well well, how prophetic. Big Kev and Maxine McKew, both out in the cold, just like you said, Sheila, in the Federal Elections. These elections were a first where Australians were actually able to express themselves against the big population pushers. Maxine is truly a Dodo and Kevin is just like Nebukenezzah.