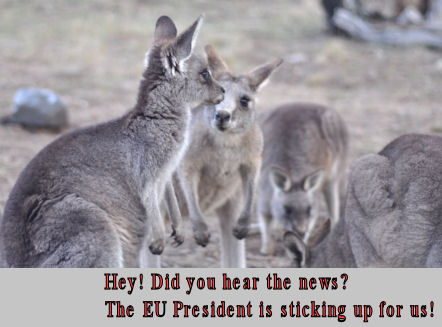 In a truly amazing turn of events, Professor Jerzy Buzek, President of the European Parliament and one of the highest officials in Europe, has added his name to a growing campaign to have kangaroo products banned from Europe.

In a letter to the 440,000 campaign director, Philip Woolley, Mr Buzek, who introduces himself as a scientist by profession, said:


“I believe that such actions as yours are important and valuable. Therefore I would like to express my support for the campaign. I wish you success in running the campaign and encouraging as many EU citizens as possible to support this project.” 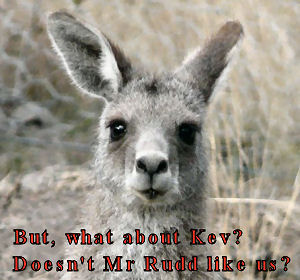 “This kind of support is just what we are looking for from caring and compassionate people,” said Philip Woolley, EU Campaign Director for the Australian Wildlife Protection Council (AWPC)

Woolley further went on to say: “Since we received the support of the EU President we have been inundated with support from across Europe and Australia. It seems that the world is saying enough is enough. We now have over 6000 signatures from very concerned citizens who are supporting a ban.”

The campaign has now reached the Australian Federal Government who are watching the campaign’s developments with great interest.

Mark Coultron, the Federal member for Parkes, and the opposition has reacted to the EU campaign, declaring that if the kangaroo industry stops, there will be a population explosion of kangaroos. How can he or any government in Australia make such pronouncements when it is common knowledge that the state and federal governments in Australia simply lack statistical data of sufficient standard to know what the kangaroo population is or does? What we do know is that humans are overpopulating this country and the governments are all encouraging that, yet we are running out of water. Mr Coultron is in a rural electorate and NSW appears to be going broke, so his constituents are probably desperate and so is he. It is a pity that we are in an economy where the cost of everything basic, but particularly land for housing is so high that it drives the cost of doing business beyond the ability of the small entrepreneur or family farmer. We can't blame kangaroos for that. Mark also wants to promote tourism in rural areas. Good idea, but most of the tourists would like to see kangaroos, and there aren't many around. And most tourists would like to think that the kangaroos were well treated. If farmers were not so under the gun from ridiculous global competition policy, they would not be overstocking their paddocks with neglected sheep and cattle and would not therefore get so hysterical about their stock sharing a bit of pasture with kangaroos. Face it Mark, the kangaroos got along perfectly well in this land before a bunch of desperados decided to shoot them for not much more meat than rabbits. They are not the ones that need to control their population. Sheila Newman, population sociologist

Our fate is sealed - Coultron is right

I don't know about that. Have you noticed that, since Brigitte Bardot got the EU to ban seal products the seal population has exploded in Canada and Alaska and the harp seal is seeking revenge. There are hardly any humans left. The streets are full of barking seals and the smell of rotting fish. The seals are making their way as we speak towards Washington and the Whitehouse. The airports are paralysed with people trying to get away - to Haiti or anywhere It will be the end of civilisation as we know it. Can you help us here, Mr Coutron? Forget the kangaroos. It's the seals that are the real threat. Ahgghhh! And they're wearing white coats.

This conjures up the most wonderful visual image for a cartoon! :-D

Jobs and economic growth is just not sustainable on denuded land

Mark Coulton says "Australian roos are culled in a humane way, and fears any move to stop the cull will hurt regional employment". Typical of a red-neck, shadowy parliamentary secretary for regional development to be concerned for "regional employment" above concerns for our wildlife and the environment they contribute towards in keeping it intact. The Federal Member for Parkes says he hopes the meeting with Tony Burke will fast-track the application for exceptional circumstances drought relief for farmers. Mr Coulton says it is important Tony Burke hears first-hand that recent rain has not been enough for farmers to recover from years of drought. Maybe the livestock industries are just not sustainable and have sucked the lifeblood out of the area! Lack of "regional employment" now is supposed to be supported not only be tax-payer handouts but by further denuding of our landscapes of native animals. When will the desecration of our ancient land stop? Employment, economic and population growth cannot be endlessly supported while we keep extracting anything that moves and lives out of our fragile landscapes. "Quite a few people" are employed in the kangaroo killing industry, he says, but they are also employed in prostitution, pornography, drug smuggling, illegal logging, child trafficking, whaling, fur industries, sweat-shops, the tobacco and cocaine industries too! The means does not justify the end, and regulation can't change what is morally wrong to one that is honest and correct.

Kangaroo meat could be exported to China

There is a new frightening report that MP for Agriculture, Tony Burke, is negotiating the export of kangaroo meat to China! See ABC Online report "China agrees to roo meat imports". Federal Agriculture Minister Tony Burke says while export protocols are yet to be finalised, the Chinese have agreed to import roo meat. While activists have plugged a hole, Russia, and others are in the process of stopping the import of kangaroo products to the EU, we have Tony Burke, with the assistance of Anna Bligh no doubt, doing their best to increase this dirty trade! There are many myths being propagated by the kangaroo meat industry, and our Government has just announced that the industry's 4000 workers will be trained under a $400,000 package to "clean" it's image and woo back Russia! More training and skills will not make a difference to what is morally wrong and cruel. This disgusting decision to export kangaroo meat to China, a country full of billions of people with such horrific treatment of animals already, is utterly disgusting and shameful. Jobs and economic benefits are being put above common sense, loyalty, patriotism, and compassion for animals that are our own kind, and part of our national heritage - as they are Australian! Being Australian doesn't mean much these days, with globalisation and mass immigration, but it does to lots of genuine Aussies who love our landscape and native animals.

The successful campaign in China appears to coincide with another attempt to woo Australians to eat more kangaroo meat. This time FATE & WWF Australia staff are portrayed as casual university acquaintances in the Sydney Morning Herald's article Kangatarians Jump the Divide and (awkwardly) explain their notion that it's OK for vegetarians to eat kangaroo - it seems that they are not really eating meat after all, just kangaroo. This article reads as an advertisement for the FATE project and the kangaroo industry. The lecturer in this article is the manager of the FATE project which along with the kangaroo industry's John Kelly have been trying desperately to get Australians to eat kangaroo since the Russian ban last year as a result of bacterial contaminations. With a potential EU ban on kangaroo imports looming they are now resorting to conning the Australian public into believing that eating kangaroo is "semi-vegetarian" - I would have thought that converting a vegetarian into a "kangatarian" was to put it mildy: reckless, particularly when it's coming from a scientist who should know better. Sarah Doornbos is also involved with the FATE project / kangaroo industry; why is there no mention of this? While Sarah, Samantha and Peter are munching on their kangaroo wrapped in prosciutto I wonder if they spare a thought for the 115 joeys that are killed for every 100 female kangaroos shot in the field. Sure, about 2/3 of those joeys are "humanely" killed by smashing their skulls or decapitation, the other third however are left orphaned in the field to starve, what do WWF make of that Samantha?

So KAA (Killers of Australian Animals) is trying to trick the Chinese into eating pet food? That will be the con of the decade if they pull it off. What a loss of face for the Chinese caught out eating what KAA sells as pet food in Australian supermarkets. One would have thought that if Chinese had an appetite for wildlife so much why aren't they serving up their Giant Panda, Chinas national mascot and be labelled 'Pandarians'. How dare the Chinese eat Australia's national mascot! The Chinese used to eat monkey's brains while the monkeys were still alive. If they are still that barbaric, why should their immorality stop at animals, with so many unwanted Chinese babies? Does battered joey attract a higher price per kilo, like quail does to chicken? Vegetarians should be disgusted by KAA's lies and immoral conduct. KAA is such a low life cult as to deserve grouping with rapists, pedophiles and mass murderers. Tiger Quoll Snowy River 3885 Australia