Haiti - Should the world protect Haiti from US 'Aid'? 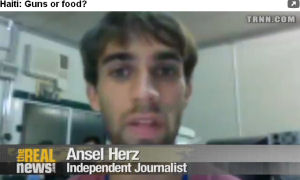 Are troops what Haiti needs?

In the above news item, "Are Troops what Haiti needs?" Produced by Jesse Freeston, Reporter Ansel Herz says, "At one of the hospitals in Haiti that was not crushed there are basically just a few Haitian doctors there Haitian Red Cross then a team of French doctors probably about seven of them ... They're basically treating like one or two people at a time... They're poorly equipped. They don't have all the supplies that they need. ..There are hundreds of people outside this hospital in tents, waiting for some kind of care, many of them have been there for days." (Ed. There were similar reports on the French news a few days ago, and also that the US forces were more or less controlling the one airport and stopping other nations from helping the Haitians.) Ansel Herz also comments on the hyping of looting themes broadcast by mainstream news in Britain, with pictures showing two men trying to get items out of a collapsed building. He says that he has not seen any looting and that people are trying to find food and are sharing it with each other. 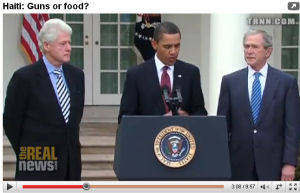 After the earthquake in Haiti, America is seen coming to the aid of the Haitians, with its mighty military power, although aid has been sent, it is not getting through to the people, which may be purposely done to plunge Haiti into rioting and looting that will need the U.S. soldiers to step in and declare military rule. This will be the prelude to yet another puppet government put into place to serve the U.S. Imperialists.

Disaster Capitalism and the Shock Doctrine 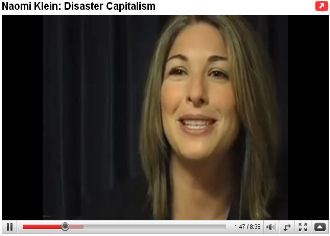 The clip above is of Naomi Klein talking about "disaster capitalism" as described in her book, The Shock Doctrine

After a tsunami wipes out the coasts of Southeast Asia, the pristine beaches are auctioned off to tourist resorts. New Orleans residents, scattered from Hurricane Katrina, discover that their public housing, hospitals and schools will never be reopened. After 9/11 The White house passed the patriot act.

These events are examples of the shock doctrine: using the public's disorientation following massive collective shocks - wars, terrorist attacks, or natural disasters -- to achieve control by imposing economic shock therapy, which advantages the US and its major financial organisations and corporations. Conditions are imposed, such as the selling off of publicly owned water and power to private companies when people who would normally unite to resist this are unable to organise against it due to fighting for their lives against a natural disaster.

The clip from The Real News also has footage from an interview with Peter Hallward, author of Damming the Flood, on sustained interference by recent US presidents, Bush and Clinton, and financiers with the ability of the twice reelected Haitian president, President Aristides, to carry out his election program. Bush and Clinton have already become involved in the US Disaster Aid program. This is a real problem for Haiti and for the world.