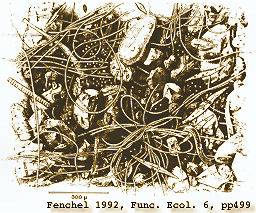 Ed. (Sheila Newman) Last year I spent a lot of time editing with Alice Friedemann a new version of her essay, "Peak Soil" for a book called The Final Energy Crisis (2nd edition) Pluto Press, UK, 2008. I was impressed by the way her writing made the reader sit up and see that soil was not just dust and minerals, but alive. Here's a typical paragraph:


"There’s so much life in the soil; there can be 10 “biomass horses” underground for every horse grazing on an acre of pasture. Just a tiny pinch of earth could have 10,000 different species - millions of creatures, most of them unknown. If you dived into the soil and swam around, you’d be surrounded by thousands of miles of thin strands of mycorrhizal fungi that help plant roots absorb more nutrients and water. As you swam along, plant roots would tower above you like trees as you wove through underground skyscrapers."

When I read Dairyman Dave's explanation of soil structure, published below, although it is much shorter and quite different in style, I was similarly impressed by a capacity to evoke interest and understanding in what for most people is an invisible, indestructible firmament, taken for granted.

When I was very young, 18, I remember taking a college course on agronomy, taught by an old professor with white hair. Many years later I realized the values he was trying to teach us. It became clear that he wasn't too fond of the direction that agribusiness was taking agriculture but he had clout and was "allowed" to speak his mind some of the time. For example, he taught us how hybrid corn was made and why but at the same time he pointed out that non-hybrid corn could be just as good and to prove it he always planted some in his test plots so he could show us. Of course, I couldn't have cared less at the time.

He retired the next year; they finally got him out of the way. He also posted a philosophical truth across the blackboard each day which no one paid any attention to, of course.

This man stressed the importance of soil structure and spent time explaining what it was and how it is made and what destroys it. Again, I couldn't have cared less at that time of my life; the course was required. I was into engineering, high tech stuff, important stuff.

I will try to explain soil structure. Think of the World Trade Center buildings before they collapsed. They had structure. After they collapsed, aside from the dust, all the materials were still there but without structure. Imagine that we want to add to the building materials. We dump a few truckloads of cememt, steel and glass on top of the rubble. It's all there but still no structure.

This is how modern farming works; we just dump on the materials and mix it in. Heavy machinery crushes whatever structure there might be. We farm without the structure.

But healthy soil has structure. What would it take to change that pile of rubble back into the World Trade Center? Who would do it? How much energy would it take? Answer: I couldn't do it, you couldn't do it. It takes experts to do it, it takes lots of time and it takes lots of energy. Those experts are the soil organisms, many different experts, and we need to give them their due respect...and get out of the way and give them what they need to do the job. These "bugs" like good food, not just minerals and lignin. Only they can build soil structure.

Dairyman Dave is a US farmer

Agronomy and soil science are vital related fields of knowledge that Australia, with its typically poor and fragile natural soils, could well benefit more from, if it is not too late.

The reasons the Murray-Darling Depression bioregion has become an environmental basket case is due to colonial exploitation involving excessive deforestation, water rediversion, irrigation, and top soil mismanagement. A better understanding of the supply-water potential and drainage potential of soils is critical particularly in oils of relatively low organic matter content typical of much of inland Australia including the Murray-Darling.

We cannot afford to allow traditional farming practices to prevail. Widespread damage to Australia's soils causing acidification, salinity and erosion has underscored the viability of our remnant flora and fauna and ecosystems.

A key conflict to be resolved is the low phosphorus characteristics of Australia's native soils with which our native flora has evolved over millenia, yet the dependancy of traditional cropping on high phosphorus levels. Soil acidity is the worst environmental problem affecting Australian soils. According to the NSW Department of Primary Industries soil acidification is caused mainly by alkaline crops like lucerne being extracted from farms and excessive use of nitrogenous fertilisers (superphosphates) mainly sold to farmers in Australia by Incitec Pivot and the build up in organic matter by livestock.

A decade ago, Dr John Williams, the then Deputy Chief of CSIRO Land & Water, reported in a CSIRO media release entitled 'THE ANSWER REALLY DOES LIE IN THE SOIL' (1998):
"The greatest problem facing Australia’s soils is structural decline, leading to falling agricultural productivity. The bottom line is that it is very clear there has been significant damage to the nation’s soil resource, due mainly to farming, forestry, horticulture and other forms of development."

The next greatest threat is acidification of soils, a problem both insidious and very widespread. For this there is, as yet, no Australian farming system which can significantly slow the rate we are acidifying our soils. Land cleared of native vegetation tends to go acid at a rate of about one pH point every 35 years. In under a century some soils will become too acid for crops to grow."

"Put it all together and we see continued risk of damage to one of the world’s poorer soil resources – at the same time as there is great pressure on farmers to increase productivity."

And that was reported by Australia's leading science organisation over ten years ago. Wake up Australia!