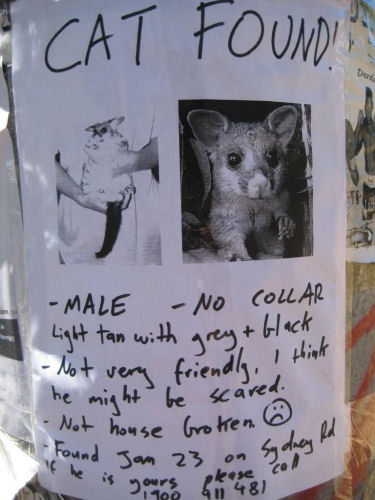 I recently received the photograph above with the following email message:

AND FEEDING IT CAT FOOD TOO !"

The students had apparently posted a picture of a possum they had found in the street, believing it was a lost domestic cat. Admirably, they were feeding it and looking after it, whilst seeking a rapid return to its owner. Perhaps even more incredibly, the possum seemed to have adapted to its new role as a rescued domestic cat.

Incredible, eh? What cute naivety on the part of those Japanese students. What must the possum think of the whole thing, you wonder? Did it stay with the students? Did it manage to get them to enlarge its diet to include seaweed salad and radishes? Did the students eventually realise that what they had was not a cat, and change the possum over to its rightful diet of gum-nut flowers and coastal tea-tree, perhaps with the occasional desert of red geraniums?

Actually, this poster is a fake. Sandy Fernee writes, "The possum is one that was in a shelter over 10 years ago, in fact the picture was stolen from the shelter operators' posting."

But the real story is a nice one too. "The possum was released 10 years ago and has probably had lots of babies in the wild [...] This fake poster has been going around for about 2 years now."

She adds, "Please remind people with injured possums that they should call their local wildlife rescue group."
Sandy is the Executive Officer at Wildlife Victoria www.wildlifevictoria.org.au and a licensed wildlife carer.

Come to think of it, while we are on the subject of Japanese view-points, possums look a bit like Tortoro, a giant friendly Japanese wood-spirit made famous through the Japanese anime, film, My Neighbour Tortoro.

And Tortoro looked like a great big Pokemon, the Japanese cartoon animal hero.

It would in fact be nice if the Australian Brushtail Possum were to have the same support that Pokemon has, world wide. As it is, in many places in Australia our brushtail possum wood spirit look-alike is atrociously treated and disrespected. Anyone who has formed a relationship of mutual trust with a brush tail possum - through raising one or looking after an injured one for a long time, knows what fun they are - and how cute - as well as courageous and social. They are, however, mistreated by many councils in Australia, treated as 'pests' by the state government, and seen as a target for cruelty by some members of the public.

The possum is a powerful suburban advocate for all Australian wildlife and so many Australians and Australian visitors miss out on possum magic. Tortoro was a kind of animal god who made friends with some children and protected them and was remembered all their lives. How much richer our lives in Australia would be if we gave that kind of respect to that curious and sociable, playful and mischievious, but independent creature, who tries to get along with us in the suburbs - our friend - the common brush-tail possum.