Will Turkey’s Election Give Peace a Chance in Syria?

The June 7 parliamentary election in Turkey could have a huge impact on the conflict in Syria. The invincible image of President Erdogan has been cracked. There is a real chance that the election might lead to substantive change in Turkish foreign policy promoting the war in Syria. (This article first published at Dissident Voice on June 24th, 2015.) 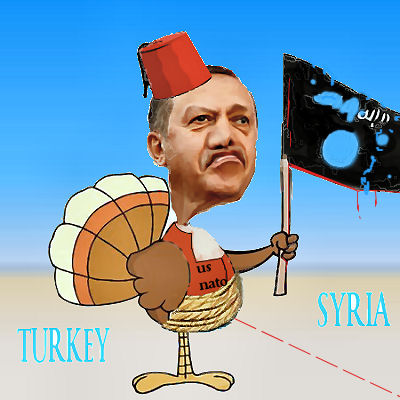 Even though Erdogan’s Justice and Development Party (AKP) won the most votes, they lost their majority in parliament and must now find a coalition partner. Turkey’s new parliament was seated for the first time on Tuesday June 23. Now begins the political bargaining and negotiations to form a governing coalition.  Depending on the outcome, Turkey may stop or seriously restrict the flow of weapons and foreign fighters through its territory into Syria.  If Turkey does this, it would offer a real prospect for movement toward negotiations and away from war in Syria. Why?  The Syrian war continues because Saudi Arabia, Qatar, Kuwait, USA, France, UK and others are spending billions of dollars annually to fund the armed opposition and sustain the war in violation of the UN Charter and international law.

The following examples show the extent of Turkish involvement in the war on Syria:

The AKP government has vigorously tried to suppress information about the extent of Turkey’s support of the war on Syria. They have resorted to repression and intimidation such as:

As seen in the examples above, Turkish AKP authorities have aggressively tried to suppress information on the involvement in Syria. If they have been that aggressive with Turkish journalists, prosecutors and military officers, how far might they go against a foreign journalist working for Iran’s Press TV?

The American born journalist Serena Shim died just days after she documented the use of World Food Program trucks to transport foreign fighters to the border with Syria and into ISIS territory.  After learning that Turkish intelligence was looking for her, Serena Shim was so concerned that she expressed her fear on television. Two days later, Serena Shim’s car was hit head-on by a cement truck.  The driver of the cement truck disappeared but was later found. There are many discrepancies about what happened. The first reports indicated the truck and driver left without stopping.  Then the driver and truck were located, and then photos appeared showing a collision.

While some Turkish security services have preemptively exonerated the driver of the cement truck,  the local prosecutor has filed charges against the driver, accusing him of causing death through negligence. There are many suspicious aspects, not least is the fact that the cement truck’s wheels are angled toward the car, not away as one would expect with a vehicle trying to avoid collision.

The death of American journalist Serena Shim, and her factual investigative reporting on Syria and Turkey, stands in sharp contrast with the sensational media accounts about the “kidnapping” of NBC reporter Richard Engel. That event turned out to be a hoax contrived by “rebels” to manipulate American political opinion.  With the complicity of individual reporters and mainstream media, the fraud was successful.  The bias in mainstream western media is further demonstrated by the almost complete media silence about the death of Serena Shim and her important journalistic work.

For the past 13 years Erdogan’s Justice and Development Party (AKP) has had majority control of Turkey’s parliament.  In the recent election AKP’s share of the popular voted plummeted 10% and they lost their parliamentary majority.  The results are a clear rebuff to Erdogan and AKP policies.  Sixty percent of voters went against AKP, splitting the vote among the three alternative parties. The pro-Kurdish and Leftist People’s Democratic Party (HDP) burst onto the scene capturing 13% of the votes and equaling the number of parliamentary seats captured by the rightist and anti-Kurdish National Movement Party (MHP). The main opposition party is the social democratic Republican Peoples Party (CHP) with 26% of the vote.

Over the coming weeks, AKP will try to form a coalition government with one or more of the alternate parties.  However, it won’t be easy. The natural bedfellow would be the anti-Kurdish and rightist MHP, but they are demanding the resumption of a corruption trial against AKP leaders including Erdogan’s son Bilal.  That trial would probably lead back to President Erdogan himself, so it seems unlikely AKP will ally with MHP. The three alternative parties could form a coalition to govern without AKP, but it’s hard to imagine the staunchly anti-Kurdish MHP allying with the pro-Kurdish HDP.

If a majority coalition cannot be formed within 45 days, the Turkish constitution requires a rerun of the election.

Even with severe repression and intimidation, the Turkish public is aware of Turkey’s policy supporting war on Syria. One consequence of the war has been almost 2 million immigrant refugees with the dispersal of many throughout Turkey, providing cheap labor and adding significantly to the unemployment problem.  In addition, there have been terrorist attacks in the border region and an escalation of corruption and repression as external money and weapons have flooded the area en route to Syria. The war against Syria has been widely unpopular and played a significant role in the election.

The coming weeks will indicate how Turkey moves forward:  Will AKP manage to form a coalition government with one of the opposition parties? Or will there be another election?

Will Turkey start enforcing the border and stop shipments of arms to the armed opposition as demanded by the leader of the main opposition party?  This would be a huge change in the dynamics within Syria. Without a rear base of constant and steady support, the armed opposition would be forced to rely on their own resources rather than those of foreign governments.  They would quickly wither since they have very little support base within Syria.

Since the election, there are already signs of a shift in the balance. Kurdish forces recently captured ISIS’ important border crossing at Tal Abyad. This has been the main route of weapons, fighters and supplies between Turkey and the Islamic State’s ‘capital’ at Raqqa in eastern Syria.

The Past Year and Looking Ahead

Thirteen months ago it looked like the war in Syria was starting to move toward resolution. The last remaining armed opposition in the “capital of the revolution” Homs, reached reconciliation and withdrew from the Old City of Homs in May 2014.  On June 3, 2014 the election in Syria confirmed substantial support for the government.

Since then, we have seen dramatic changes. On June 10, 2014 ISIS surged through western Iraq and captured the city of Mosul and huge quantities of American armaments including tanks, rockets, humvees, etc. That led to the creation of the “Islamic State” and expansion in eastern Syria including Tabqa Air Base where hundreds of Syrian soldiers and ISIS fighters died.

This past spring saw the coalescing of numerous foreign and Islamist groups into the Jaish al Fatah (Army of Conquest) supported by Turkey, Saudi Arabia and Qatar.  With high powered TOW anti-tank missiles and thousands of shock troops they were able to overtake both Idlib and Jisr al Shugour near the Turkish border.

ISIS and the Army of Conquest are both dependent on the Turkish supply line. If that is closed off or seriously restricted, it will dramatically change the situation.

With the prospect of losing their base of support in Turkey, will the opposition try something desperate to draw the US and NATO into the conflict directly?

The Turkish people have indicated they want to stop their government’s war on Syria.  If their will is respected, it should lead to restricting and stopping the foreign funding and promotion of the conflict. If Turkey stops the flood of weapons and foreign fighters into northern Syria, it will be following instead of violating international law. This will give peace a chance in Syria.

Rick Sterling is active with the Syria Solidarity Movement and Mt Diablo Peace and Justice Center. He can be emailed at: [email protected]. Read other articles by Rick.