I'm not against growth but.... 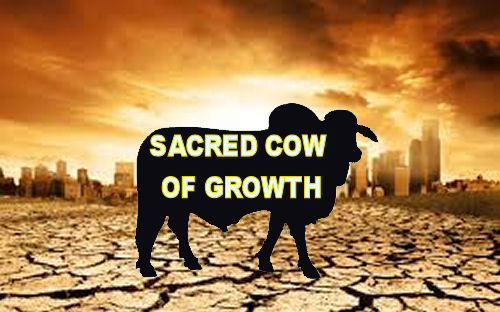 "God, Sydney’s just unmanageable now. The traffic is beyond control. The roads just can’t cope! I’m not against growth but there’s not enough room on our roads for all the traffic!”

The young woman was inviting her friend in Melbourne to visit her in Sydney.

“We have the same problems here." her friend replied. "The traffic is so terrible that if you head off to do something in a particular suburb, chances are you will have to change your plans due to traffic. You never know really where you are going to end up. One night recently I needed to cross to the other side of the city to meet friends for dinner and I had to just give up and go home. I didn’t even make it to the city, let alone out the other side. I was in gridlock. Of course, I’m not against growth either. How could one question it with all the benefits even though, I must admit, it’s hard to see what they are.”

"I do wonder myself," her friend from Sydney mused. "But they say we must have it." She continued: “They’re constructing a new major road in Sydney for the traffic overflow and people have had to sell their houses to the government and, you know, they don’t even get market prices for them! I’m not against growth but…"

"Yes, it’s the same here in Melbourne. Houses belonging to people who had lived in them for 60 years were acquired by the government to make way for a new tollway but then, with the change of government, it did not go ahead. It was too late for some people as they had moved on but many were very relieved to be able to stay. But then they will have to go through it all again with another change of government as the Libs are determined to build it. If or when it is built it will go right through Royal Park which will be a terrible pity, it will wreck it, actually."

" Oh that's terrible to put it through a park, although I'm not totally surprised."

"I don't live near Royal Park, but it is still upsetting. Nearer to home most of the houses in my area that come up for sale are bought by developers. Then they're demolished and replaced with high density living. We're even getting high rise towers. No wonder parking in the local shopping centre is almost impossible now! But that’s progress isn’t it? And neither of us is against growth.”

"No of course not!! But the same problem afflicts our suburb in Sydney. All the gardens near us have gone. We used to have lots of birds but we see very few now. I used to really enjoy hearing them in the morning. It’s sad but I guess we have to live without a few things we used to enjoy. Oh well, we can’t have things all our own way I suppose and you can't stand in the way of growth."

“I guess it’s all very well for us to say this but what about the kids? There are not enough schools in and around Melbourne and what about the poor train and tram commuters? The trains are terribly overcrowded, by about 50% over maximum capacity. It can’t be healthy to be crammed in like that.”

“Yes it’s the same in Sydney. It’s really not as nice a place to live in as it was when I arrived from London with my parents 12 years ago.”

“Well if it’s anything like Melbourne, it will have grown by about a million people since then. They have to be packed in somewhere!”

"I guess our family have been part of all this! Oh well, at least we subtracted a family of five from London but then London’s kept growing too! Where will it end? What will it be like in 50 years? “

"It’s too far ahead to think about really, but it’s happening so fast in Melbourne and we can see it happening. Maybe we don’t have to worry about 50 years from now but we sure as hell need to worry about five or ten years from now! Already it’s not as good as it was when I was a kid and it sounds as though it was much more free and easy when my parents were young and Melbourne was not so huge”

The two young women pause , deep in thought for a moment.

“If things are not getting better in Melbourne and they certainly are not in Sydney, then something is wrong!"

Neither of us opposes growth but this actually seems to be the problem! What do you have when you don’t have growth? How does that work?"

(Both together) "Oh God! This is doing my head in!”

"Don’t worry about it now , let’s go and have a drink and start planning your trip to Sydney. Oh!! that’s where this whole discussion began wasn’t it?!”

Researchers discovered that it takes a minority of just five per cent to influence a crowd’s direction – and that the other 95 per cent follow without realizing it. The research findings show that as the number of people in a crowd increases, the number of informed individuals decreases. As the number of our own "herd" increases, it seems that more people fail to see the size of their population, or question its source.

Modern psychological and economic research has identified herd behavior in humans to explain the phenomena of large numbers of people acting in the same way at the same time.

Herd mentality is embedded in the communication systems humans are forced to use for lack of choice as to the source of information.

We end up being blinded by our own herd size, or just see the city as our focus. The more of us there are, the less power is given to each person, and they are unable or feel incompetent in changing the status quo. As for population growth, it's assumed that it's somehow inevitable, uncontrollable and unquestionable. We just adapt to our human-soaked landscape, and the Herd even gives some comfort, of "safety" in numbers. Only the outsiders are vulnerable, from predators. We become robotic, and conformists in this herd culture. People don't want to look outside their framework, and PC is the fence that keeps them silent- with "xenophobia" or "racism"!