A koala was photographed today (25 November 2017) in the Frankston Reserve, just as Parks Victoria are about to rip down the fences and open the gates for 24 hour recreational access. This park had been until recently a natural reserve for wildlife, established with great difficulty by local wildlife activists and scientists. Urgent action is required to stop Parks Victoria from giving the public 24hr access to Frankston Reserve. It was always a stupid and selfish decision to reverse the status of a natural reserve which had been acquired with such difficulty by people who actually cared about our wildlife. The presence of the koala emphasises the tragic folly of this decision. Please write to Frankston Council and these parliamentarians: lily.d'ambrosio@parliament.vic.gov.au (Yes, this is the e-mail address from her parliamentary web page - Ed); Nick.wakeling@parliament.vic.gov.au; Councillors@frankston.vic.gov.au. 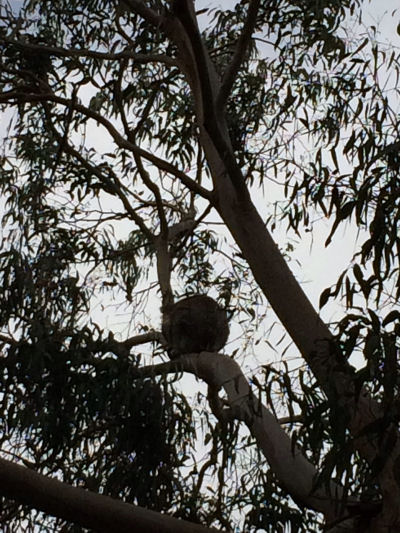 [Koala Photo credit to Sue Chan.]
Frankston and the Mornington Peninsula wildlife are under assault from human expansion under the Victorian Government program to grow our population whether we like it or not. The very least that could be done would be to try to have decent protective reserves for the animals that remain and which make this area so special.

Apparently, however, Parks Victoria - who have taken over the management of a reserve until recently designated for wildlife protection as Frankston Nature Conservation Reserve - are going to tear down the fences and allow 24hr access to this park. Parks Victoria are known for their very inadequate attitude towards native animals. See: /taxonomy/term/1112.

We already have a terrible problem with mountain bikes vandalising many areas of natural vegetation that are open to the public. Australia is also prey to many acts of cruelty towards our native wildlife. Opening the park to public recreational activities will drive all wildlife out of it and endanger any that attempt to take refuge there.

Koalas are terribly rare in Frankston and on the whole Mornington Peninsula.

The decision to make the park available to the public for recreational activities is so, so ignorant and short-sighted.

Furthermore, the safety and security of the houses near this reserve, which is in a developed area, will also be in danger endangered by 24 hour public access to such an unfenced ungated area.

Please try to get this decision reversed. It is impossible to engineer our population density and numbers upwards and protect native animals if they are in open reserves.

I have finally sent an e-mail

I hope that it is not too late but I have just sent an e-mail now. I am not sure if the text interests anybody but it is just a combination of modified parts from the above text and general comments that I make about the need to stop expansion of human activities and about myself returning to my country of origin, Croatia, in order to reduce my impact on the native animals of Australia.

Simon. please post your email. That is a very generous offer of yours to return to Croatia. If I could return to my ancestral origins and if I thought it would help i would too. Please consider though that as an apparent advocate for Australia's native fauna, it is probably better that you stay!