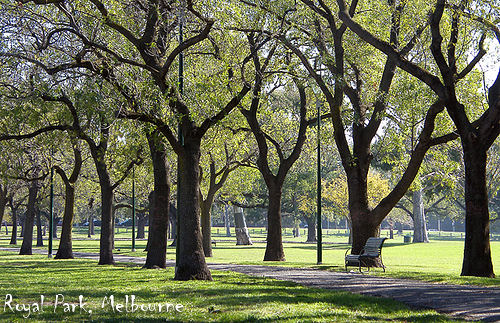 I. Transurban and the Western Distributor

Death of the East West Link

Yesterday I attended a meeting at the State Netball and Hockey Centre in Royal Park - the first since the election - and lost no time in reminding the meeting that the wonderful views of Royal Park from the Hockey Champions Room - the Conference Room - would have been entirely ruined as, had Napthine been elected, construction on the EW Link would have started by now. We would have been looking down on a quarry immediately to the south of the SNHC - 40 metres away in fact. This would have been the preparation for the tunnel under the Upfield Railway Line through to the Ross Straw Field in West Royal Park. Plus there would have been a construction road for trucks up Brens Drive right past the SNHC building and through the SNHC carpark into the area to the west of the Zoo which was designed as a construction camp and a carpark. It is a major miracle that the Royal Park landscape is still intact.

So again thanks to the multitude of groups and organisations fighting the EW Link and the Labor Government for terminating the project.(See attached Age photo dated 22 November 2014 taken on the location of entry to the tunnel on the Ross Straw Field.) But read on for the danger of the Transurban and the Western Distributor. Thanks to YCAT for the information - see YCAT website.

Transurban: Western Distributor - Information sessions through the inner west in May and June

Thanks to Berish Bilander, of Public Transport Not Traffic who organised the walk in Yarraville last Sunday.

Coming up are Transurban's information sessions. They say ""Drop in to learn more about the project, talk with the team and provide feedback" People are urged to attend! But watch our for the advertising spiel. We have had experience with Linking Melbourne Authority for the - in our view - highly misleading sessions re the EW Link. They consisted of lots of photos on walls and a few staff to answer questions. Transurban has already an advertising campaign on commercial radio and is even advertising on Radio 3MBS Fine Music Melbourne!

II. Defence of Our Parks from Commercial Development and Takeover by Parks Furniture

http://www.theage.com.au/victoria/melbournes-parks-need-more-tourist-attractions-new-york-parks-man-says-20150525-gh8ulp.html The Age 25 May 2015 by Aisha Dow "Melbourne's parks need more tourist attractions, New York parks man says." This online version contains my comment but the editor had cut me out from the hard copy. For once I agree with the Lord Mayor of Melbourne quoted here! It was encouraging that according to a 3AW report 80% of listeners to 3 AW said leave our parks alone they are fine. This was after the interview with the American visitor Mr Mitchell Silver. See below letters to the Age Editor.

Mitchell Silver, New York City's parks commissioner, believes Melbourne's parks don't have enough attractions ("US expert says Melbourne parks are lacking attractions", 26/5). Clearly, he did not take the time to visit Albert Park. If he had done so, he would have witnessed how this park has been sacrificed by successive state governments for the staging of a taxpayer-subsidised annual car race. Would New York residents be happy if Central Park was offered up for a similar purpose? I don't think so. (Joe Erftemeyer, Caulfield East)

Parking it on the grass

Mitchell Silver said that Fitzroy Gardens "did not seem heavily used" and there was not enough seating. He is also quoted as saying: "What will happen is that people will either sit in the grass or keep walking." This reveals cultural differences between Australians and Americans. First, most of us are working during the day but we appreciate our parks as they are still active as the lungs of the city. Second, we just love sitting on the grass. If catering for the elderly or disabled, we folk will come prepared with fold-up table and chairs. That way we can enjoy the true bush atmosphere of Royal Park or the elegance of the historic Royal Botanic Gardens without their being cluttered with useless, dated and visually intrusive park furniture. (Lewis Prichard, Hawthorn)