Australia March 4: National Protest in all states civil & industrial rights - "The Fight of our lives" (CFMEU) 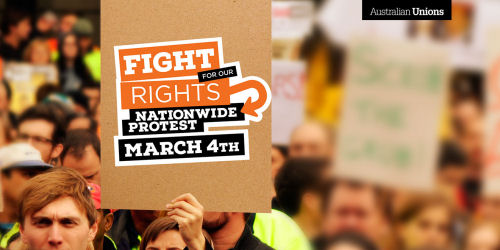 Tony Abbott is wilfully destroying our jobs, our families and our communities through his policies on 457s and his free trade deals. He is letting the big end of town get away with dodging taxes and he’s destroying our living standards by increasing the pension age, cutting superannuation, slashing Medicare, and cutting wages, conditions and our rights at work.

But on the 4th of March we'll be raising our voices as one. Throughout the country we’ll be fighting for our rights as part of a National Day of Action. And regardless of the Murdoch media, we will be heard.

Can you join us on the 4th of March and stand up against Tony Abbott's attacks?

We want everyone who goes to take a picture of themselves at their rally and tag it #SolidaritySelfie. It doesn’t matter if it’s on Twitter or on Facebook, we want to see social media light up with thousands of pictures of Australians rallying against attacks on our rights and conditions. And if you can’t attend a rally we want you to take a photo of yourself wherever you are, tag it #SolidaritySelfie and show that you’re with us.

#333333">There are events being held in 14 different locations around Australia. Even Tennant Creek in the Northern Territory is holding a rally. This National Day of Action could be the biggest show of strength against Abbott's agenda, but we need your help.

#333333">Find out where the locations of the rallies around Australia are and come along.

#333333">P.S. Have you seen the Victoria Trades Hall Council commercial they're showing on TV yet? Watch it here or below.

Our rights at work are again under attack from Abbott's Coalition Government and big business.

We aren't going to stand by while they destroy our living standards.

The time to stand up and fight back is now.

Regardless of the Murdoch media, this time we will be heard. We want everyone who goes to take a picture of themselves at their rally and tag it #SolidaritySelfie.

Here are the locations and times that rallies will be held around the country - we'll be updating them as more are confirmed.

Block Wednesday 4 March in your diary and start encouraging your friends, family and co-workers to join us. Because the bigger the crowd, the stronger the message we send.

We can’t stand by while the Abbott Government destroys our living standards by:

Times and location will be confirmed in coming days, but you can register your interest in attending and we will send you updates.

Tony Abbott is trying to wind back the clock on Australia, and bring us back to our lawless beginnings, of few laws and regulations regarding the workplace, our health and our jobs. This is pure, and destructive, neo-liberalism of favouring the Economy, and capital business owners, over the population of Australia that governments are meant to represent. Our fore-fathers worked hard to bring our living standards up to that of a developed nation. Globalism is a giant force now set to give Australia a severe blow! Huge corporations, united together, and becoming increasing bigger and wealthier than governments, and the latter are meant to tow the line for their vested interests. That means they will be able to monopolize our retail sector, and quash any objections or controversy. To compete in the world market, our wages must decrease, along with workers' rights, so we can compete with third world competitors. Humans are no more than economic units, to be exploited and manipulated for the convenience of Big Businesses, and $$$.

Economists love growth, it gives them a job

The Finance biz love growth, because it gives them work. We ask economists and banks and money men what to do, and lo! Behold! They advocate the very things which require more investments and debts, i.e., whats good for their business. I am NOT talking about the economy in general, but their SPECIFIC careers and businesses. An analyst from a bank will support growth, because it makes his employer money. That is their prime motivation. Few state this. Even better, if their advice fails, they get paid to clean it up. How many people who helped cause, or failed to foresee the GFC got fired? Analyst after analyst, economist after economist failed to predict it, and kept their jobs. Our politicians don't see this. Most people don't. They honestly believe that the economic advice they receive is "objective". That the CEOs of banks and handlers of capital are being objective. This is like asking barbers whether people should get their hair cut more frequently, because the barber "knows about hair". Our obsession with economic experts is on the SAME level of silliness. Of course they would say what they say. This might seem a basic point, but it underlies what is going on. Globalism, free movement of labour, financialisation, these are nothing more than the results of getting advice from people who just also coincidentally happen to profit money and power from it. I think many people miss it. When Harry Triguboff talks about mass importing of people and ending the cottages and moving people into units, he is just arguing why we need his specific business. Yet no one just says it. A bank will advise for something that allows them to make more loans, but no one just says it

The economists that you refer to as not seeing the GFC coming are referred to as economic rationalists or as John Quiggin prefers market liberalists. Economists who did manage to predict or anticipate some form of calamity arising are loosely referred to as Keynesians or Post Keynesians. Both John and Steve Keen belong to the latter group and have written books ("Zombie Economics & Debunking Economics") which outline the complete nonsense on which market liberalism is based. Again both of these gentlemen have web sites (www.johnquiggin.com and www.debtdeflation.com) tackling a range of issues. John's blog is a more current affairs based site engaging with the general public in discussion on a wide range of topics. Steve's website is more economics based as he tackles economic rationalism head-on, he is currently based at Kingston University in England and is acquainted with Yanis Varoufakis Greece's current Finance Minister. It is their insight into the connection between banks, debt and money and the denial of those connections by mainstream economists (economic rationalists) that has me intrigued. What we are seeing in Australia today is that very same denialism that caused the GFC in governments at all levels and of all persuasions, big business, the mainstream media including the ABC. Denialism is a product of neoliberalism where the rights of society are reduced and/or withdrawn in accordance with the prevailing doctrine at expense of the majority for the gain of the minority in power.

I do follow Steve Keen's blog. Please note, the fact that these people are exceptions, proves the rule. There are some professional economists who saw it coming, but they don't represent the mainstream, and they stand as exceptions to the institution of economics. Politically, it is the actions of the institution which matter. Currently the world is suffering from lowering GDP expectations. Growth is slowing. We are now acknowledging that the best days have already passed! This is unprecedented. But why is it happening? Why after continuous improvement of quality of life, are we seeing the end of this trend, and the eventual reversal? Why is the West now working harder and harder to maintain the same quality of life? It seems universally recognised that the 'good times' are over, but WHY? This is the issue. The WHY isn't I believe a matter of economics. Some economist may be able to better explain the mechanics behind what is happening, and be able to better diagnose bubbles and busts, but what is the solution? If the cause is not economic in nature, than economists can't address the cause. Our economic problems are outside the their scope of expertise. The problem is a societal one, and I am NOT talking about whether we follow Marxism or Free Market Libertarianism. The clue is in the apathy that exists towards the problem of declining living standards...

At least the ABC covered the event nationally. I don't understand why the CFMEU itself is relying on a few commercial vids when surely they have plenty of footage taken by members.

Anyway, looks like this event was pretty successful. May we have many more.
Thanks to the CFMEU.