This article thanks all who attended the celebration today (7 December 2014) to give thanks to the incoming Labor Government and to all who have campaigned for years to save Royal Park and the Zoo from certain destruction should the East West Link be constructed. The article also contains a photo of a concerning note left by East West Connect for a resident, requesting some kind of ongoing involvement in the link.

The Zoo celebration event was sponsored by MCAT - Moreland Community Against the East West Link, PPL VIC - Protectors of Public Lands Victoria Inc. and RPPG - Royal Park Protection Group Inc. Thanks go to the Zoo Director, Mr. Kevin Tanner, who addressed our group and escorted us to the elephant "paddock" (if that is the correct name) where the curator gave us a great report on the Zoo elephants and their histories. (The Zoo waived entry fees for our group.) I hope Channel 2 ran a report on the news. We finished the visit with lunch at the Lakeside Cafe. 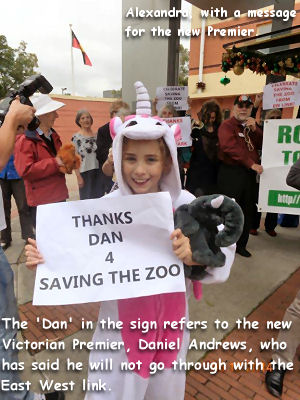 Note the photo of a child, Alexandra, dressed as a unicorn holding a wombat with the message : "Thanks Dan 4 Saving the Zoo"

The 'Dan' in the sign refers to the new Victorian Premier, Daniel Andrews, who said he will not go through with the
East West link, which the outgoing Coalition government was hell-bent upon. The freeway would have affected the zoo.

This photo and the photo of the group (where one person is still reading the message on her poster) were done by Jill Quirk. Thanks also go to Michael Petit for MCAT who spoke about the threat to Zoo animals by the East West Link. And lastly to Rod Quantock the MC of the event and President of PPL VIC. 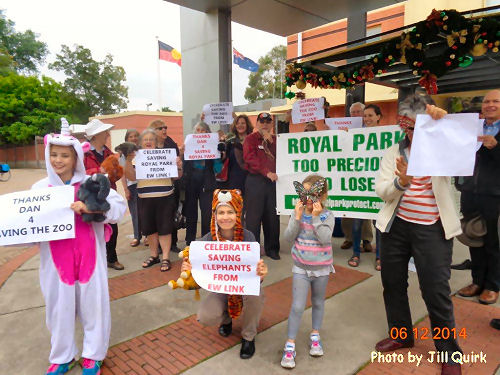 One of the objectives of PPL VIC mentioned to Mr. Tanner at today's event is to have talks about promoting public transport for visitors to the Zoo and revive the plan for a special tram on the 55 Coburg line to be painted with Zoo animals like the old tram on the Elizabeth Street/Royal Parade line which existed 10 years ago or so.

As people might be aware, not only did the Coalition Government sign contracts before the election and prior to proceedings in the Supreme Court, but actually commenced work in Royal Park 2 weeks before the election marking out trees at the Tunnel entrance plus a construction road up Brens Drive and through the State Netball and Hockey Centre carpark. Our lawyer wrote letters to the East West Link Connect consortium demanding that they desist from marking trees and stop work. We are therefore sending out a request for membership renewals for groups or individuals and/or for donations. As you will be aware Royal Park was included on the State Heritage Register but then Minister Matthew Guy listed exemptions for the East West Link this rendering the heritage listing useless. We are now seeking legal advice to delete the exemptions thus ensuring Royal Park is protected forever!

What's Happening over Work on the EW Link? 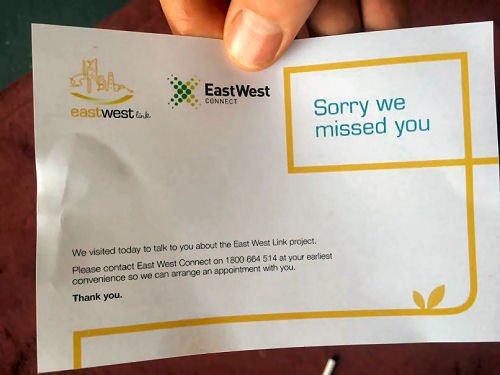 Received today was a report by a resident in Parkville that he received in the mail yesterday (see attached) a notice from East West Connect. He rang today Saturday and they said they wanted to put a machine on his balcony "to record the sound levels from the City Link highway for a week"! He declined. Please advise me if anyone else has been getting notices from East West Connect. We will investigate. .

Disturbing News Re Possible Clearfelling of Trees in Princes Park.

According to a number of reports trees on the perimeter of Princes Park including the 100 year old Moreton Bay Fig trees and the lines of eucalypts are marked out with yellow paint and the ground marked in pink. This could signify complete and wholesale axing of tree cover. The City of Melbourne received $14 million for the development of sports grounds including Princes Park to compensate clubs on the Ross Straw Field when it was thought this section of the Royal Park would be taken over by the East West Link. So the question arises. Is the development of Princes Park going ahead under false pretences now the EW Link has been cancelled?. Does any of this development conform with the Princes Park Master Plan? A cursory inspection of the plan would indicate that all the existing trees are in the Plan. We will question Councillors and staff. Please if anyone can supply photos of marked trees let me have them ASAP.