What did possums ever do to humans?

An example of a 'possum band'. This ridiculous sort of chastity belt for trees to stop possums sheltering where they have always sheltered is a cruel device for which residents unwittingly foot the bill to councils in nice little rorts arranged with the manufacturers of these totally unnecessary devices.

What gives? What's up
what motivates
the householder the radio jock
the councillor the passing hoon
to scheme so strangely to deprive
the naive possum of his life?

Is it bloodlust
Is it fear
that so inspires
the deadly sneer
that so conspires
the dark career
to so reject the furry feature
to so harass a fellow creature?

What is this dreadful cowardice
this low pursuit of the defenceless?
How do his persecutors justify
harassment of this little guy? 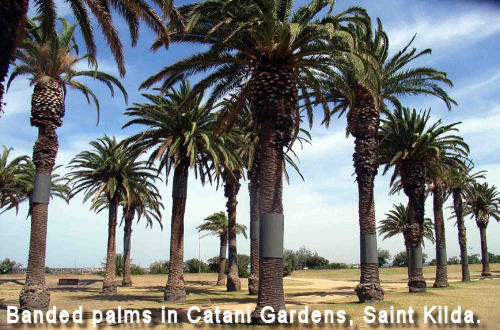 The Australian suburb of Saint Kilda, Victoria, is memorable in its dedication to possum harassment by possum-banding trees against all opposition and in its provision of easily disprovable reasons for doing so. The Port Phillip Council that oversees St Kilda started out saying that possums transmitted a kind of wilt that affected palm trees and that they were banding the palm trees in Catani Gardens, St. Kilda. They were unable to prove that possums spread palm wilt and unable to show that the palm trees had any wilt. In the picture you can see that the trees' thatches are uniformly healthy. That didn't stop the council putting up the possum bands, though and causing deaths of possums through loss of shelter. There was a war for years between the council and the people who loved and visited the possums. It was a stinking example of despotism on the part of petty officialdom. The most obvious motivation was commercial gain from manufacturing and providing the metal bands, which ratepayers were funding under the guise of combatting a non-existent threat to palms. The wound has still not healed. The bands are still there. The possums still lacking shelter. The unfounded cruelty still unrepented, still shaming. The scandal, the cruelty, still raw, still present. And since spread to other councils, like a commercially motivated cancer, masquerading as science.

The cruel and silly possum band

What reason pray
to persecute
the innocent arboreal brute?

Were the councillors irate
to know that something lived and ate
yet did not bow to council rate?

How else to make the possum
know
that humans ruled the land
Except to place around its trees
arcane and ugly possum-band?
That piece of steel and human vice
flouting reason, cruel device and -

Ridiculous at any price!
An impost and an insult to
ratepayers of intelligence
moreover anybody who
had the slightest bit of common sense

Cloaked in pseudo science and blindness
- to prevent wilt they said -
bereft of empathy or kindness
- they left the possums dead -
the humans, creaming off some cash
from ratepayers to reimburse
the manufacturers of this trash

Hmm. To me this comment, "Cull, baby cull," highlights the untenable nature of human expansion. Where is the fairness? What is left for the possums? Does the writer want to be the only species left in Australia, bar some exotic flowers, which would then be eaten by some other animal, including insects, that would step into the possum's place? I live in a house with a fair amount of Australian vegetation, including trees, as well as some camelias, roses and fruit trees. The possums won't even accept apples here, when I occasionally think to offer one. We do have permanent residents in the roof and in the trees outside, but they don't create a problem, unless you consider their courtship routines an affront, but personally I find those amazing banshee yowls amusing. The thumping on the roof also makes me smile. It is as familiar as rain. It doesn't keep me awake. What does keep me awake at night is developers, planners, and all the other people who force us to live with constant change, overdevelopment and overpopulation. We bought an old house - it is now about 80 years old. Maybe the possums here had time to adapt to human incursion, thus they don't rely on our fruit or our exotic flowers. They disdain them. The house seems to be able to cope with them in the roof and on the roof. What kind of house is so poorly built that it cannot cope with possums? Australian houses should be able to cope with Australian conditions. Yet another criticism of the feral housing industry in this country. Population growth at the bottom of it again, causing cruelty and intolerance. At least the anti-possum writer has a sense of humour and tries to put his/her case clearly. Thanks.

I can sympathise with #comment-8829">P Incorrect's frustrations at the his nibbled plants. I am host to one ring tail possum in the middle-inner suburbs of Melbourne (not Moonee Ponds) who gives me only one day a year in spring to enjoy the new leaves on the top of my fruit trees. After that I see that they are increasingly chewed each morning. The interesting thing is that back when Edna first used the word "possums" as a term of endearment, possums were no big deal at all. We hardly knew they were there, such was the "low" density of suburban living that it permitted large gardens and plenty of open space. At that density we apparently lived in harmony, not only with possums, but frogs, lizards and birds as well right in suburban Melbourne. It really is a matter of proportion and we are increasingly out of proportion with everything else that lives and breathes in the world because there are too many of us. People can't tolerate elephants that trample and eat their crops so the elephants get killed. The elephants only do it because they need to eat. We can't tolerate bears, lions and tigers living near us because they might eat us- so they all get killed.

It seems such a small thing to allow possums to climb native trees in public places in order to get some shelter.

Whitehorse Council is holding an information session on living with possums. Picture: Foundation for National Parks and Wildlife.

POSSUMS are seen as pests by countless Melburnians, but Whitehorse Council wants to show you how to live in harmony with them.

The council will host a living with possums workshop on Monday, March 23, in Blackburn North.

Whitehorse Mayor Andrew Munroe said the session was a great chance for residents to learn how to live with possums without losing their trees.

“This information evening aims to educate residents on how to protect their trees by preventing possums from reaching the tree canopy,” Cr Munroe said.

Cr Munroe said the council had found the increasing possum population was damaging residents’ trees due to overgrazing.

“Possums have adapted very well to the urban environment and as a result of that we need to implement measures to protect our trees without harming the possum population,” he said.

The Department of Environment and Primary Industries will present information on safe possum repellents, issues with possum relocation and the laws around trapping possums.

Blackburn resident Peter Baker will also share information on how he and his family saved a large tree in their backyard from near death through trial and error.