Back in July Parks and Wildlife culled about 600 of the island's kangaroos, wallabies and pademelons. Adults were being shot and vets were euthanasing orphaned joeys.
Parks says it is necessary to "manage" the island's wildlife population.

Correspondence from David O'Byrne, Minister for Environment, Parks and Heritage. O'Byrne grew up in Launceston and studied at the University of Adelaide where he gained a degree in Labour Studies. He has no environment/wildlife expertise or training. He is a manager of Tasmania’s parks and reserves system.

Forester kangaroos and Bennetts wallabies were introduced to Maria Island in the late 1960s. However, by the early 1990s the numbers had increased greatly and there were indications that parts of the island had been adversely impacted by overgrazing with regeneration failure of trees, shrubs and herbs and erosion problems on foreshore areas.

This overgrazing was not only affecting the survival of native vegetation but also leading to serious animal welfare concerns where animals have become sick, stressed and eventually died of starvation during periods of low rainfall when there is insufficient feed to support their numbers.

Surgical sterilization of male kangaroos presents a range of issues including significant animal welfare concerns due to accidental injury, adverse reactions to anesthetic, and capture myopathy as macropods when captured and handled, are particularly prone to stress resulting in death.

I would note that all culling is undertaken by Government officers who are trained, accredited and experienced in wildlife management and who operate in accordance with all relevant national and Tasmanian standards. Moreover, the program is supervised by a veterinary officer who has animal welfare a priority of their work.

I thank you for raising this matter with the premier.

The idea of bringing animals to Maria Island was to create a fauna reserve that would attract tourism. Obviously even back in 1965 there were also concerns about whether some of these unique Tasmanian native animals would become extinct due to mainland development.

The Forrester Kangaroo is recognised as the Tasmanian subspecies of the Eastern Grey Kangaroo which is widespread throughout the eastern Australian mainland. 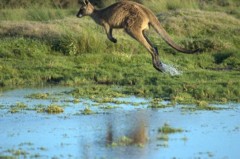 The Forester Kangaroo has undergone a reduction of at least 90% in range since European settlement. Little is known regarding the actual rate of historical decline in population numbers since European settlement but it is considered that major declines related to the arrival of white settlers in Tasmania in the early 1800s and occurred due to shooting for human consumption and dog meat.

600 kangaroos were thus "managed" to death, in under the thinly disguised justification of "animal welfare"!

This previous "cull" was completed in 4 days at night in gusts of 40-75 KPH which is a clear violation of the Code of Practice. In the 2006 Maria Island slaughter two vets Ian Langstaff and David Obendorf documented numerous breaches of the law which resulted in horrific suffering to these pademelons, rare and "protected" Forester kangaroos and Bennetts wallabies.

Instead of investigating and implementing humane contraception options, Maria Island is now a Private sporting shooting Reserve for the staff of TPWS and some of the politicians of Tasmania. Even a past Premier of Tasmania used to go shooting kangaroos there.

Their magnanimous "animal welfare" concerns about suffering, stress and some deaths due to handing and sterilisation are simply shallow and hypocritical. Instead, they are quite prepared, in the -best interests of the animals (?) - to make sure they are 100% killed with bullets instead of relocating them, or risking the surgery!

Works worth nearly $1 million to repair storm-damaged infrastructure at the Maria Island National Park have begun last month, the Parks and Wildlife Service announced. (13th August 2010). In November last year, an intense storm cell dumped 150 mm of rain on the island during a 12 hour period – overtopping the Bernacchi dam wall and sending a torrent of water downstream. With torrents of rain, the drought is well and truly over!

Erosion and other impacts are more likely from human visitors, exceptional weather, than macropods!

These native animals have brought tourism benefits to Tasmania. Translocations of macropods were not considered in case they are successful, and this would set a precedent that they don't want. Bullets are cheaper and quicker!

Re the Management of Brushtail possums in Tasmania for their meat and skins.

"I do appreciate the concerns you have regarding our unique and valuable wildlife. I would, however, like to reassure you that every effort is made to ensure populations are managed sustainably, and any mechanisms used are designed to minimise any suffering with non-lethal methods being the preferred option".

They don't need "management" but should be left alone. How can their inevitable suffering be minimised? They will fight for their live and suffer horribly.

"It must be recognised that some species of wildlife, including Brushtail possums, have increased greatly in numbers as a result of farming and forestry activities and these animals now occur in large numbers in many parts of rural Tasmania. The rural environment has so favoured possum populations, and their numbers are now so high, that they can cause significant damage to crops and pastures".

This is government-speak for displacement of wildlife due to rampant growth in crops and logging in Tasmania. How could this "favour" the possums? They can't live in crops, and they can't live in chopped down forests! It sounds like the "plague" of kangaroos, due to "improved" pasture.

"The Wildlife Trade Management Plan for the Brushtail possum has been developed to comply with a range of strict requirements. These importantly include mechanisms to ensure the plan is undertaken in a manner that is both sustainable and humane. Animal welfare issues are dealt with in the plan with live-trapping harvest being covered by a Code of Practice Approved under the Animal Welfare Act 1993".

What killing can be "humane"! They will be captured, and absolutely terrified and stressed!

Actually, it doesn't give me any reassurances, or justify any trade using our wildlife! Where is the voice of Tasmanian Greens on this matter?