Who's Shilling for Whom? 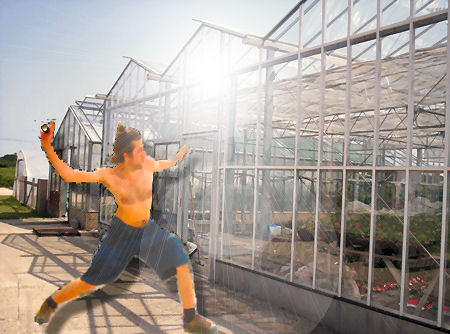 The cheek of it all. Here is the chair of the David Suzuki Foundation, James Hoggan, himself the President of a Public Relations firm, claiming that the debate about the veracity of man-made climate change (AGW) is largely a public relations stunt by industry front groups conducted in community newspapers. The secret of their power, Hoggan argues, lies solely in the ability to hide the source of their funding---the oil, coal and gas industry. Billions are being spent in a misinformation campaign that dwarfs that of the tobacco industry to protect its profits by underwriting organizations like the “Friends of Science” , right-wing think tanks and phony grass-roots efforts that pack town halls and stack meetings with industry employees in a strategy called “astro-turfing”. The result is to create an “echo chamber” of congruent voices that seem to argue that science is just a point of view.

Hoggan, of course, defends the right of people to have a politically incorrect opinion. As does the CBC--- as long as that opinion is not heard by the audience. But opinions are not equivalent to the arguments that meet the standards of a peer-reviewed scientific journal. And as James Prall, a computer network manager at the University of Toronto notes from his examination of his data base of 2,940 “scientists” who have an “opinion” about climate science, yeah or nay, only 14 of the 615 scientists who have published articles in peer-reviewed literature have taken a skeptical position. Yet, Hoggan conceded, on CBC radio’s “The Current” (November 19/09), http://www.cbc.ca/thecurrent/2009/200911/20091119.html that sometimes the scientific “consensus” has it wrong, that science is pushed forward by the challenges of skeptics. The truth, after all, is not a referendum arbitrated by counting votes. The correct “opinion” constitutes a majority of one. Nevertheless, he maintained, he would rather trust the opinion of NASA or the Royal Society over one Tim Ball.

Unfortunately, though, Hoggan laments, the industry’s campaign of falsehood by proxy is working, as the belief in man-made climate change has dropped from 47% to 36% in the United States. To sort out the factual sheep from the tendentious goats, the public must subject climate change scepticism to two tests. They must ask, “What are the qualifications of those making these claims, where is their peer-reviewed research?”. And secondly, “Are they receiving funds from the industry?” These sound like reasonable questions. Too bad they are not put to the David Suzuki Foundation (DSF) and other AGW advocates as well.

Lawrence Solomon, a world-renowned environmentalist author and veteran campaigner against rainforest destruction and nuclear power, makes the point that AGW proponents too, have their vested interests. In fact, he observed, the U.S. government alone has provided tens of billions of dollars for climate change research over the decades, and recently, some $4 billion a year. Energy analyst Richard Wakefield pointed out while skeptics have indeed received some $30 million from Exxon, governments have funded AGW research with $80 billion. Solomon said that as far as research is concerned, “skeptics need not apply”, as for example a Danish proposition that climate change issued from solar activity. The imbalance in peer-reviewed literature reflects the fact that scientists have shifted their research to get funding, and most are afraid of losing funding and becoming a pariah. Can any objective observer not concur that corroborative “science” and congenial conclusions can be bought and paid for, that there is a correlation between research findings and the results that those who funded the research wanted to find? Solomon argues that big money is to be made on man-made climate change, and that even the oil-industry is pushing the AGW model. And as journalist Christine MacDonald so ably documented in “Green Inc.”, big industry is funding environmental groups, as Solomon noted as well.

That is what makes Hoggan’s stance so galling. While David Suzuki has insisted that “corporations have not been interested in funding us----we get it from ordinary Canadians across the country ...and some foundations in both Canada and the United States” (interview on the John Oakley show, Feb. 15/2007 AM 640 Toronto), the truth is otherwise. The truth is that the DSF’s annual report of 2005/2006 alone listed at least 52 big corporate donors, and that such donors include the EnCana Corporation, a world leader in natural gas production and oil sands development, ATCO Gas, Alberta’s principle distributor of natural gas, and a number of pension funds including the Ontario Power Generation Employees’ and Pensioners’ Charity Trust. OPG operates 5 fossil-fuel burning generation plants and 3 nuclear plants.

The prime question then becomes, who is shilling for whom? If those politicians who deny AGW theory should be, according to Suzuki’s recommendation, “jailed”, should not a penalty of similar severity be meted out to Green Icons who in bald-faced fashion deny the existence of their corporate benefactors?

This is not about whether AGW theory is right or wrong, or what the “science” –however tainted—says. It is about media double-standards and green hypocrisy. In a perfect world, arguments should be judged on their own merits, not on the credentials of those making them or who pays them to do so. But it is the kept leaders of the environmental movement who threw the first stone, and it is about time that someone fired it right back at their glass house. It is about time that CBC-Pravda subjects the Green Pretenders to some investigative journalism, to correlate their policies with those of the corporations who fund them. To ask for example, if it is more than coincidental that the DSF and Natural Conservancy Canada accept donations from corporations like the Royal Bank of Canada but somehow manage to be mute about the manifest ecological damage wrought by immigrant-driven population growth which the Royal Bank shamelessly lobbies for at even more shocking levels? If we are to follow the money trail, let’s follow it wherever it goes. Even it leads to the door of a CBC-anointed demi-god.