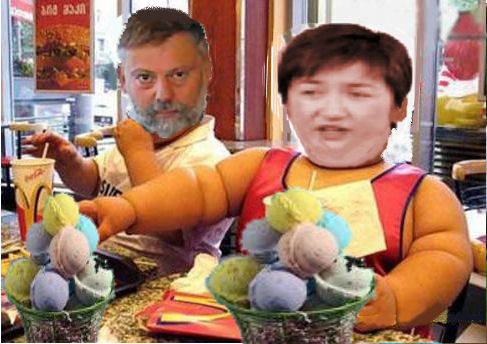 I understand that Australia, if it keeps to its present course, is projected to grow its population by some 14 million people, or 65%, in just 25 years. Climate Change Minister Penny Wong of the growthist Labor administration of Kevin Rudd, was asked this question on September 21/09:

Interviewer:
"Minister, Australia's population is projected to increase by 65% to the level of 30m people by 2050. During that same period, the government is committed to cutting our carbon emissions by 60%. Aren't those goals or those facts mutually exclusive? How are we going to massively cut carbon as our population continues to massively grow?"

Penny Wong:
"Well, absolutely not, because the key issue with reducing emissions is that we have to de-link our levels of carbon pollution from economic growth and population growth. We have to ... Whereas the last few hundred years emissions growth - that is, growth in our carbon pollution - has essentially tracked our population and economic growth, we have to break that link and that the whole world has to break that link and so does Australia. So the key issue here is breaking that link, not, not trying to reduce population." Source: http://candobetter.org/node/1563

Letter to the Minister:

Penny, I have a weight problem. My doctor tells me that if I persist in eating a litre of ice-cream every day, I will increase my weight by 65% in just 25 months. But since it is chocolate ice-cream, I feel it is racist to pin the blame for my growing girth on it. I also feel that it is possible to “de-couple” my weight gain from my caloric intake.

In fact, while I now wolf down 4,000 calories a day, I believe that I should look forward to doubling that intake by 2035. I need a caloric stimulus package that will kick-start my body and brain from its current slow-down. I can compensate for any negative consequences by metabolizing the ice cream more efficiently. I call it “smart gluttony”, and already the environmental movement is wanting to adopt the phrase as a slogan for their “green living” tips.

If I buy green-coloured ice cream, lime-flavoured, it would be a symbolic statement of my fresh approach to a sustainable future for my body. As we know, cosmetic labeling in and of itself usually suffices for a substantive policy shift.

Ms. Wong, I must congratulate you for your faith in human ingenuity. Julian Simon was right. Malthusians chronically underestimate our intelligence. With enough brainpower, we can have our cake (or ice cream) and eat it too. Ice cream that doesn’t consist of calories. Growth that doesn’t result in carbon emissions. The Peter Pan School of Greenwash. Make a wish that growth will have no ecological cost, and that wish will make it true. Pure magic. Hey, I have seen that trick played in Canada too. We signed on to the Kyoto accords in 1990 with the promise that we would reduce our greenhouse gas emissions by 6% by 2012 but by 2006 we were 22% beyond our emissions level in 1990. Of course, that had nothing to do with the fact that immigrant-driven growth has increased our population level by 22% (27.7 to 33.7 million today). Like the environmental establishment, we simply ‘de-coupled’ our imagination from reality. Population growth, where? Who cares? Perhaps we could become a race of 15 billion “breatharians” who simply subsist on air in a world where thirst is decoupled from water use and hunger is decoupled from food use. As our population grows, so grows the pool of our ideas. The sky is the limit!

Oh to be young again. Hopeful, credulous and cornucopian.

Wong is *a word has been Censored here, as it is not politically correct* for saying this: '...growth in our carbon pollution - has essentially tracked our population and economic growth, we have to break that link and that the whole world has to break that link and so does Australia... The irony of Ms Wong *Censored, Non-Politically Correct Words Removed* making this comment, regarding increasing our population (and don't worry about the pollution it causes) cannot escape even the blandest and most politically correct of Ordinary Australians ... or don't they care that house prices are being forced through the roof. Unsustainable levels of growth with the consequent pollution, lack of water and arable land might force even you Ms Wong to... Please (Re) Consider. For my own comment on immigration/population at this site:http://candobetter.org/node/1724#comment-3831. The above link seems to have disappeared ?! My Book & Website www.somethingfunnygoingon.com If you're interested in Civil Liberties, Over population & Pollution and don't mind caustic humor, Agent Provocateur: the backlash against the anti smoking campaign is a Voice backed by research and reason.

Even a 5% reduction of greenhouse gas emissions is ambitious

Senator Wong told The Weekend Australian (12 Dec) the government had already factored in Australia's economic circumstances. "We have set clear conditions for our target range and our different economic circumstances are embodied in those conditions and in the target levels we have set," she said. "We haven't put forward the 20-30 per cent cuts Europe is proposing because our economy is different, and we will be fully accountable for any target we put forward." Our economy is "different" because we depend on population growth, whereas many European countries are stabilising their numbers - what our government would call "stagnation"! So, for all Wong's rhetoric and policies and talk of targets etc etc, we won't even be trying to reduce our greenhouse gas emissions by even 20%! According to the Population Reference Bureau from 2004 to 2025 the United States is expected to increase in population from 294 million (1990) to 349 million. Australia is expected to have a population of more than 25 million by 2050, concentrated in the capital cities, which are becoming “magnets” for skilled workers from around the world. Over this same period, Europe is expected to decrease in population from 728 (1990) million to 722 million. Based on expected population trends, any treaty based on the total greenhouse gas emissions of countries will strongly favour Europe over the United States and Australia. Even so, the temperature in Europe has risen by an average 0.95°C in the last 100 years and is projected to climb by a further 2.0°- 6.3° this century as greenhouse gas emissions continue to build up. Yet Austria, Belgium, Italy, Ireland and Spain, according to an EU Climate change progress report published by the European Commission on 27 October 2006, will not be able to meet even the modest emissions targets set by the Kyoto Protocol (an 8% reduction from base year levels - normally 1990 - by 2008-12). (Optimum Population Trust: Too many people: Europe's population problem) The "difference" is our economy is dependent on population growth, and the mammoth in the room being ignored by our hypocritical leaders who are ready to risk our future generations' climate health and the liveability of the planet they will inherit. Even a 5% reduction of ghg emissions based on 1990 figures, at our rate of human expansion, is over ambitious! What about Wong and Rudd being "fully accountable" not just for impossible yet modest targets, but for the people of Australia as they are supposed to pay more for using power, energy and water while they, our governments, continue to add consumers (to compensate for an "ageing population"), and encourage mass consumption and gluttony?