The Deceptive Green of "The Age" newspaper 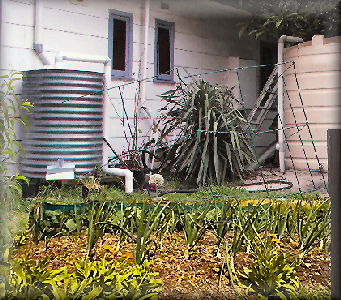 Comment on The Age article: "Deceptive green of suburban gardens".

The Age published an article on Saturday 19th September 2009 with the curious title of "Deceptive green of suburban gardens" by Robert Nelson, who is an art critic.

Another of those insidious junk-science Age stories. They seem to rely on the reader swallowing, along with breakfast, a few assertions on faith, that up is down and down is up, and we must choose between the two or else.

We are presented with the strange idea that green suburbs are evil and then the (purported) necessity of banishing them so as to significantly increase our population and its density to 'save the environment'.

People's private gardens are blamed for our high rate of car travel. This is the flimsy but principle argument against them.

Any casual observer would notice, however, that the subdivision of single dwelling blocks does nothing to encourage the people who live in them to suddenly start walking, cycling or using public transport. Nor does the constant imposition of new toll-ways and other roads in Victoria. Subdivision mostly just adds to the amount of cars already using the same roads, plus the new ones. Just count the number of garages per plan and read the residents' objections to having their streets choked with additional parked cars with every new urban infilling.

The article attempts to impugn a mode of land use that was far more environmentally benign than the high density it proposes. Not so long ago a dwelling only occupied a small portion of a block. In this arrangement houses were commonly situated on blocks with numerous fruit trees and vegetable gardens, permitting the inhabitants to grow a portion of their own food and be less reliant on our increasingly casualised job-market.

Growing food on the property where you live is one way to substantially reduce both carbon dioxide emissions and water-use, despite the fact that you have to water the garden. Public campaigns aimed at reducing household water use totally ignore embedded water consumption, especially in the food we buy. Modest sized houses that leave room on the block for gardens also have proper space for good sized water tanks, which can greatly offset mains water consumption for the garden. Trees minimise evaporation but promote healthy humidity and give shade.

Passive solar refers to designs for houses to use the sun to warm and shade to cool. Multi-unit blocks leave little or no option for optimal siting of dwellings to maximize the benefit of the sun in winter and appropriate plantings for shade in summer along with eves of width and length to serve the same function.

In the past 20-30 years in Melbourne and other Australian cities, many of those single dwelling blocks of around a quarter of an acre with one modest house have been subdivided or a new house has been built in place of an old. With subdivision, many units have replaced a single home. Where no subdivision has occurred, the modest house has been replaced by one with an expanded footprint to takeover a substantial portion of the block, leaving a token, often paved, "BBQ area".

"Set-backs" should not be portrayed as negative

These new-style blocks have only the absolute minimum set back from the front boundary. The Age article pretends that large setbacks contribute to our environmental problems, but they actually serve to separate private from public space and to provide more options for home-growing food. Often where the set-back is minimised, the occupiers erect a tall fence to obtain a sense of privacy, because the buffer of the garden is gone.

Aesthetics do not have to mean a conflict with the environment. Existing garden areas, both private and public are part of the reason why Melbourne is or was rated highly for it's livability. If a concerted effort is made to plant for food in both these areas, this will actually reduce the environmental impact of those built areas, lessening our carbon and other resource footprints while maintaining and promoting aesthetics.

It is untrue to assert that population growth in Australia is inevitable, necessary or natural

The underlying assumption of the article is the inevitability of population growth. There are two components of population growth, births and immigration. More than half of Australia's growth is from immigration. This immigration portion of our growth is entirely at the federal governments discretion. People who immigrate to Australia increase their consumption of resources relative to what they did in their home country, often by a significant factor. Increasing Australia's population is not an answer to our environmental problems.

Australia has serious issues of resource depletion, including a huge dependence on cheap liquid hydrocarbons (in the form of petrol and diesel) to fuel transport and for industrialised agriculture to produce and process our food. We are importing an increasing amount of oil from countries that themselves are facing reduced rates of extraction. Peak oil and oil depletion are not just a theory but an historical fact in many countries all over the world - including Australia - and already affect most of the world's significant oil producing basins.

Australia - especially in the South-East - has serious water issues, with Melbourne likely to go to more severe restrictions this Summer (2009-2010). This situation will probably exclude all watering for gardens. Increasing the population, even if no water is going into gardens is not part of the solution to water shortages.

The conversion of what remains of our suburbs, by that I mean the areas that are left with modest houses and reasonably sized gardens, into wall-to-wall concrete and glass boxes to cater for a government policy to increase population growth will do nothing for our future sustainability. Nelson's article in The Age attacks suburbia, but serious underlying issues of population growth and infill are already occurring which exacerbate our problems.

Suburbia in the form of house and garden is probably the most democratic and the best solution to our environmental and fuel depletion problems. David Holmgren, the co-originator with Bill Mollison of Australian Permaculture, pioneered an approach for the retrofitting of suburbs with food-gardens in the late 1990s in preparation for our very predictable predicament.[2]

The question of water, landscape structure and food production, has also been addressed very creatively by Peter Andrews, another Australian.[3]

It is deeply concerning that the Age should publish articles without evidence of real knowledge of the literature or science in a situation as grave as the one we are facing. It smacks of propaganda to keep the business community happy at the expense of the health and security of the Age's wider readership.

[1] There are many sites about home food gardens. Here is one example.

This is like blaming victims of rape for the crime!

Just maybe this Age writer was being "tongue in cheek"? Let's hope so, because the suggestion that gardens are responsible for rising greenhouse gas emissions by causing people to drive further to work is absolutely warped thinking and a discredit to the intelligence of readers! It is forcing population growth that is not Green, not gardens! On the contrary, we should be encouraging people to harvest their own water and grow their own vegetables. Urban sprawl into arable land and market gardens is causing the rise in "food miles". Blaming gardens for greenhouse emissions is like blaming trees for bushfires! It is like blaming victims of rape for the crime because of their being in the "wrong place" at the "wrong time"! With an economy dependant on a rising population, any effort to address climate change and reduce our carbon footprint is negated by more people in the equation!

Unfortunately, I think you give too much credit to the Age editors, publishers, board and the government. Sadly this was not tongue in cheek. People are gradually waking up to the extent of propaganda we are subjected to. This kind of article reminds me of the sort of thing that local medieval populations, captive to the pulpit as a source of news and information were subject to. In Melbourne (and the rest of Australia) people believe that their governments and media are basically okay, like mum and dad, with a few faults but nothing serious. Unfortunately some children do have monsters for parents and Australia does not have kindly responsible and representative governments or media anymore, if it ever did. Judge not by the smiley face on your leader; judge by their actions and the laws they make. Sheila Newman, population sociologisthome page

In a sea of biased journalism, name some worthy islands

So if we can't trust The Age or The Sydney Morning Herald, or the Courier Mail in this sea of bias journalism and propaganda, where can we find worthy journalism in Australia to set as aspiring benchmarks?

You might start with candobetter.org journalists. At least they try to write real news and political concerns and relate them to what is happening. Who else does? Some of the writers here are good and they are fearless. It's not like they get paid; they are committed. And they don't just write about one thing.