Australia is on course to miss the bipartisan target of a 5% reduction in CO2 emissions by 2020.

The emissions for the 12 months to December 2010 are 0.5%
higher than the previous 12 months , according to figures released 18th April. An increase in emissions was offset by a drop in electricity demand due to lower temperatures, the flooding of Queensland coal mines and greater use of hydro-electric power due to greater rainfall.

These temporary offsets disguise the fact that it means national emissions of over 570 million tonnes per annum in 2020, well above the target of about 530 million tonnes. 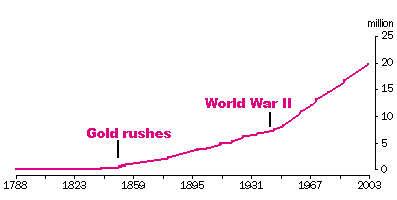 Based on even the highest population growth projections, the 2020 target will still make Australia one of the world’s most carbon-intensive economy, producing more than 20 tonnes of CO2 per person - ahead of the likes of the United States, Canada - even Saudia Arabia.

Population growth out of control

Melbourne University reproduction expert Roger Short argues that Australia's population growth – apparently increasing by one person every two minutes - is out of control, and in a paper to United Nations Framework Convention on Climate Change, recommended that the Copenhagen conference 2009 acknowledge the importance of population as a key driver of climate change.  It didn't happen!

While Australians are supposed to be reducing greenhouse gas emissions, at the same time our government is pushing for high rise developments and population growth.

High density housing advocates say planning policies must compel higher density in order to save energy and cut down on greenhouse gas emissions and to accommodate population growth.  However studies using a diversity of methods demonstrate the converse. The Australian Conservation Foundation Consumption Atlas calculation of  greenhouse gas emissions shows that those living in high-density areas they are greater than for those living in low-density areas, and that with increasing density and loss of open green areas , our cities are becoming hotter and less sustainable.

Population growth not "projected" but "targeted"

The Third Intergenerational Report's "projection" (or "targeted") is that Australia's population is likely to reach 35.9 million by 2050.

The people of Australia should be consulted, and respected and be the first priority of government . They should  not be manipulated by the economic interests of the business elite and (the) academics entrenched in the economics of constant growth.

Population growth can't be ignored in the context of anthropogenic climate change.

Braking the rise in Earth's population would be a major help in the fight against global warming, according to an unprecedented UN report published in 2009 . It draws a link between demographic pressure and climate change. Population growth is among the factors influencing total emissions in industrialised as well as developing countries, it says.

Our growing population and relatively emissions-intensive economy means that we will have higher adjustments costs than many other developed countries to reach ostensibly similar goals. Our government's posturing on climate change and ghg emissions is purely rhetoric while we in Australia continue to boost our population. How can we be taken seriously, internationally, with such discriminatory attitudes – that we can continue to grow our population and economy but other nations must reduce their greenhouse gas emissions and "save" the planet?

According to modelling, the growth in greenhouse emissions of 221 million tonnes to 774 million tonnes in a business-as-usual case (or 184 million tonnes) was attributable to the six million population growth – compared to 2000 level of 19.2 million but with the GDP reaching projected levels at 2020. Thus population growth was responsible for 83 per cent of the overall growth in greenhouse emissions between 2000 and 2020 under the business-as-usual case.

The carbon footprint of farming will become larger over the next 40 years as we feed a rapidly growing world population. With an additional three billion people in the world by 2050, producers will face a unique challenge. To feed the world, farming emissions must rise

The link between population size and carbon emissions can't be ignored when reporting anthropogenic climate change. They are irrevocably linked to our numbers, economy and lifestyles.

Australia is one of the top nations for per capita greenhouse gas emissions. Our population growth rate is the largest in the developed world. Each person added adapts our lifestyles and add to our total output. Australia has a limited "carrying capacity" due to poor regular water supplies, poor and arid soils, vast deserts, limited arable soils, and sensitive biodiversity that has evolved slowly. The "canaries in the mine" - our wildlife - are being pushed to the edge of extinction at a global rate. What ever we do individually to recycle reduce and re-use is being negated by undemocratic governments who are relying on property development and population growth to keep our growth-based economy ticking. It's unsustainable.

Many other countries have already put a price on carbon and introduced realistic pollution reduction targets.  And while they are spending significant public and private dollars firming up investment in the technologies and energy sources for the future, Australia is still locked in a debate over whether big polluters should even pay for their pollution. We are also still locked into the retro "populate or perish" economic growth ideology!

The Greens have no population policy. It's all based on vague possibilities and limitations, flexible and ambiguous statements and non-quantitative slogans. They even want to create another category of refugees under "climate change" so they can be resettled in Australia! Surely anthropogenic climate change - and all the environmental issues they say they want action on - can't be fulfilled if the elephant in the room of population growth/size is ignored.

Europe has population stability, not an economy based on growth! They can actually spend money on implementing climate change technologies, and plan ahead, not just try and keep up with infrastructure "shortages" and shortfalls. Contradictory policies will keep the Greens out of office.

Our MPs are indeed in a position to change the climate of debate in government circles , towards a culture of stabilisation rather than businesses-as-usual promotion and acceptance of environmentally damaging unending population growth.

King Brown Coal is out of control and the greatest polluter is he, He burns so bright by day and night to make electricity Damn and bugger the planet say the Miners, Damn and bugger the earth say the Unions we want prosperity, You're all dead beat you can't compete with the Hydrocarbon lobby! Mrs King Coal is an ignorant soul and goes along for the Royal spree, I'll be a “ fraccer “ and knacker your akfer and set the methane free, Damn and bugger your farms say the Miners Damn and bugger your food say the Unions I want what's coming to me The Worlds dead beat , you can't compete with polluting prosperity. The little Coals don't go to the polls so they rely on their Mum and Dad, Without credentials in environment essentials, all their decisions are bad., For -----'- sake have a go at renewables , have some guts and do the doables plead the royal progeny, But post Copernican ,obscurantists, sleepwalk to oblivion in ignorant alacrity!