At the last council meeting Cr. Katie Milne, heroine of environmentally-minded local residents, moved a raft of motions to protect koalas, which were unanimously adopted. They were:-

1. The Recovery of the Tweed Coast Koalas is to be classed as an urgent and very high priority.

2. A review of Council’s Tree Preservation Orders (TPO) be undertaken to include identified Koala habitat:-

a) Currently identified Koala habitat to be included in the TPO as a matter of urgency.
b) Further identified Koala habitat to be included as a high priority as information becomes available.
c) Council holds a workshop on the Tree Preservation orders to facilitate further preservation of native bushland and urban vegetation, especially landscape values and waterways corridors.

4. Council develops a marketing campaign to educate and enlist the assistance of the community in the preservation and enhancement of Koala populations.

5. Where Koala habitat or corridors occur on private property, Council to inform landholders and provide appropriate strategies to preserve and enhance these habitats and linkages.

6. Council develops an interim Koala Recovery Action Plan, as a matter or urgency, until a Koala Management Plan is able to be funded and implemented, this plan to include addressing ameliorative measures to known Koala problem hotspots such as Clothier's Creek Road and South Tweed.

7. Council brings forward a report on appropriate incentives that could be provided for Private Landholders to enhance Koala habitat and corridors.

8. Council writes to the Minister for the Environment and the local State Members with a request that:

9. The Tweed Link to be utilised as a medium to promote this marketing campaign to the community.

Unfortunately, Council did not vote to establish a Fund for Koala Conservation in the Tweed which would have included a donation tin (at front counters of Council offices, libraries, holiday parks and other approopriate Council places) and establishing a fund with annual financial targets promoted in the Tweed Link. How on earth will they be able fund the development of a marketing plan or campaign let alone a Koala Management Plan without funding???

Tweed Shire Council has already shown in the 2009 Management Plan not a single penny is to be allocated to the Koala Recovery Plan while they are happy to spend $150,000 on new carpets for the auditorium and $50,000 for security cameras in Main St and so on. 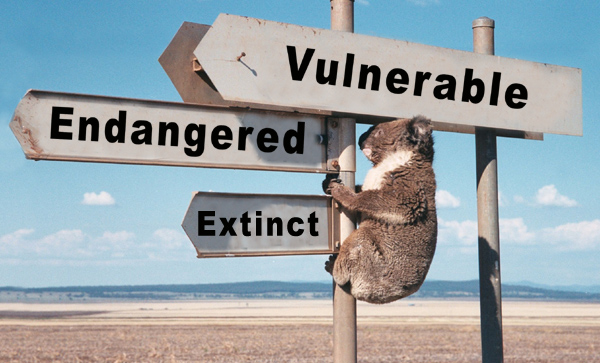 It leads one to ponder just how serious this Council is especially in light of the following letter written by the CEO of Australian Koala Foundation to Qld Premier Anna Bligh:

On behalf of the Australian Koala Foundation, I am writing to advise that we have lodged a nomination to list the Koala Coast koala population as Endangered under the Nature Conservation Act 1992. The nomination proves this population is eligible for listing under this legislation. I also wish to advise that the AKF has nominated this population as Critically Endangered under the Federal Government's EPBC Act and await the Federal Minister's decision.

You are to be chastised. This action should have been your Government's responsibility given your public admission of its endangered status. It is Queensland's faunal emblem, for goodness sake.

For the purposes of both the EPBC Act and the Nature Conservation Act, a "geographically separate population of any animal or plant" is eligible for listing. The Koala Coast area is delineated by Manly Road and Lota Creek to the north, the Gateway and Pacific Motorways to the west, Logan River to the south, and Moreton Bay to the east. These barriers effectively isolate the resident koala population as a geographically disjunct population. Genetic analysis has confirmed this geographic isolation; koalas from the Koala Coast region are genetically distinct from all other regions in South East Queensland.

A recent report prepared by one of your Departments has concluded that koalas within the Koala Coast have declined by 51% since 2006, and by 64% in the 10 years since the original 1996-1999 surveys. These declines are generally the result of high levels of anthropogenic mortality and habitat loss. There is no scientific evidence these declines have been caused by drought even though you have made a public comment to the contrary. As such, the Koala Coast population resoundingly fulfils the requirements for listing as an endangered species under the Nature Conservation Act.

The AKF believes that listing the Koala Coast koala population as `endangered' under the Nature Conservation Act will highlight the policy failures of the past 15 years, and increase community awareness of the plight of the koala in South East Queensland, encouraging further community participation in the recovery of this important population. I am disappointed that the Department of Environment and Resource Management has not already undertaken to review the status of this population under the NCA, given that the population declines have been observed and reported by departmental staff.

I would also like to take this opportunity to raise our concerns with the current process for listing species under the Nature Conservation Act. As you are no doubt aware, there appears to have been a number of significant changes to the nomination and listing process since the previous AKF nomination which was successful in listing the SEQ koala population as vulnerable under the NCA in 2003. Disturbingly, the EPA website currently has no information to guide those wishing to nominate a species for listing. In addition, the pro-forma nomination form on the EPA website has significant flaws, and does not appear to have been updated since 2007. The nomination form specifically requests anyone submitting a nomination to provide details of their publications and scientific qualifications - I would suggest this is designed to intimidate the average citizen from nominating any species for listing. Indeed I will suggest that it would be impossible for a member of the public to complete this process.

I further believe that the independence of the listing process has been compromised, as the nomination is now judged by a "technical group" many of whom are department employees, rather than by a committee of independent scientific experts as in previous years. 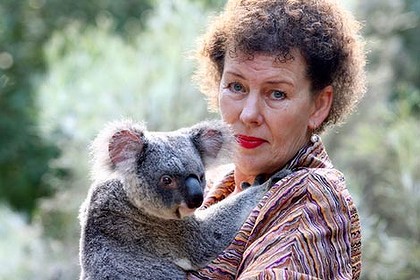 In short, Premier the process is flawed from beginning to end and indeed I believe I can predict the outcome both from Queensland and the Federal Government because of the perceived implications you fear from developer backlash.

A timely assessment of this nomination is requested.

State Government figures released in May showed numbers of the iconic species in the Redland and Logan areas halved from 4611 in 2006 to 2279 last year.

The Australian Koala Foundation has accused Premier Anna Bligh of driving South-East Queensland's population towards extinction. The organisation has now gone over her head, writing to Federal Environment Minister Peter Garrett nominating the region's koalas as a "critically-endangered" population.

In a letter to Ms Bligh, AKF executive director Deborah Tabart harshly criticised the Premier for failing to protect the animals and nominate them for extra protection.

"This action should have been your Government's responsibility given your public admission of its endangered status," the letter read.

"It is Queensland's faunal emblem, for goodness' sake."

Ms Tabart told brisbanetimes.com.au the extinction of the animals on the 'Koala Coast' - which includes Redlands, Logan and Brisbane - was now inevitable.

"It's been on [former premiers Wayne] Goss' watch, on [Peter] Beattie's watch and now on Bligh's watch," she said.

She said better koala habitat mapping, which would be available within weeks, would give councils the ability to veto development on habitat land, which was was more valuable than changing their protection status.

"That mapping will give councils the ability to identify koala habitat and ask developers to provide an offset parcel of koala habitat land if they want the development to go ahead," Ms Jones said. She said she had received the Australian Koala Foundation's nomination to increase Queensland's protection of koalas.

"We will consider its listing, but it will be done on a South-East Queensland basis, not just on the Koala Coast," Ms Jones said.

"We are prepared to change its categorisation once the koala habitat mapping is completed."

Redland mayor Melva Hobson last month said the State Government's plans had failed, and 1000 koalas were now killed each year. She told brisbanetimes.com.au last night there was too much focus on urban growth, rather than saving koalas.

"I can't find words to express what (extinction of koalas) would be like and how anybody could allow that to happen. We need to pull out all stops to recover this iconic species."

A population of fewer than 500 koalas cannot sustain itself, experts say.

However, in December 2008 the Minister for Sustainability, Climate Change and Innovation made a raft of protection provisions to the save the koala and established a task force. Yet in spite of them, the koala populations in Redland City dropped by 50% in the last year (mainly due to State authorised clearing of eucalypt trees used by koalas in order to clear land for a new school). http://www.abc.net.au/stateline/qld/content/2006/s2609890.htm

Can we rely on State governments to protect local species when Australia's track record for native extinctions is the worst in the world? Hardly.

The deplorable apathy, ignorance and arrogance filters down from the top to the bottom. Cr Dot Holdom at the same council meeting where Cr Katie Milne's koala motions were carried (which are barely a drop in the bucket compared to what needs to be done urgently) in response to Cr Milne's impassioned plea to the other councillors to raise their consciousness about the plight of koalas said that she didn't need her consciousness to be raised on this issue and proceeded to not vote for koalas to be in urgent need of protection in Tweed Shire!

I have heard it said by locals that certain business members on the steering committee of Tweed Tourism hold the view that it would make no difference to Tweed Tourism if there were no koalas left and that people would still come to see the topography and flora. But do people really think that flora can exist without fauna? Are they so ignorant about biodiversity to think that we can live in a totally mechanised, sterile world with mountains, sun, rivers and earth without animals to fertilise, aerate, regenerate grasses with seed dispersal, insect control and other integral services required for a healthy ecosystem?

If so, such bureaucrats are urgently in need of educating before they make any decisions that will affect our environment! Decisions such as Repco Rally which will be devastating for not only the future of koalas but all the current endangered/at risk species in Tweed Shire.

Why do they think we are screaming so loud to stop the Repco car crash Rally? Because we would rather spend our time, money and energy holding placards in the street and beating drums for peace for months on end, tossing sleeplessly in our beds at night, than having a life? No! Because WE care about our native animals and ecosystems and will do everything in our power to protect them, in spite of NSW state government's determination to make a blasphemy of environmental protection.

Tweed Shire needs to get its act together

What an awful council. Members of a functioning democracy would have locked the car race mongers and the multi-unit developers up in the local jail to cool off. Your councilors are off on a frolic of their own. You should make them respect you. Poor koalas, rotten council!