I was talking to someone on the phone about something I had to do. She suggested that I go up and stay in The Lodge with Scott Morrison and work on it with him. She checked with "Scott" and got back to me immediately, that it was OK. 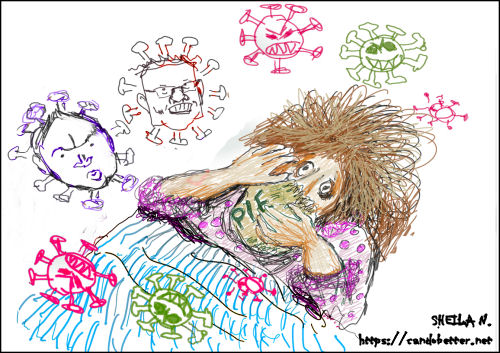 So I drove up to Canberra and pretty soon arrived at the front door of The Lodge. "Scott", who was expecting me answered the door and genially admitted me to a sort of foyer with seating and potted palms whose fronds floated overhead.

We immediately started talking about what we were doing together, which could have been running the country or making a submission about protecting the environment.

Pretty soon though, Treasurer Josh Freidenberg also arrived at the door, happily greeting both of us, seeming not to think anything was wrong.

I said to them "Look, I can't stay if both of you are going to be here."

They hesitated and made some smoothing noises about trying to work it out.

"Josh" said, "You've been vaccinated haven't you?" to which I answered, "Yes," but I said, "That doesn't really help in the situation."

I then left by the front door and made my way out to the road. Almost immediately, I realised that I wasn't sure how to get onto the road out of Canberra towards Melbourne. I seemed to have forgotten about my car and, instead, found a bus shelter with a map. I picked out a straight road right through the middle of the maze of circular roads, which I deduced was Northbourne Avenue. I was quite anxious at this stage and climbed on a bus.

I got out at the next stop and tried to walk back the way we had come in search of another bus stop, but I was still on the same side of the road .

I then met a young man, who I asked for help. Meantime, I had realised that I wasn't wearing a mask. I could feel the police nearby and I was desperately trying to hide my face.

The two of us ended up in an outdoor food place which served all sorts of pre-prepared pizza and pie-like stuff. I wasn't at all interested in this fare, but felt obliged to get something, which I brought back to an outdoor table, and sat with this young man, eating.

When we had finished, I frantically gathered up the paper in which the food had been wrapped, fashioning it into a mask, and placed it over my face. We then took off on foot ….

I woke up at this point.

You must congratulate dear Marigold for her engagement with the big themes of Climate Change and Covid Management, even in her dreams during Victorian Lockdown 6. It is impressive that she was so focussed on looking for leadership and actively effecting change in her dream that she promptly arrives in Canberra trying to discuss plans at the needed highest level - with our Prime Minister and Deputy PM. Sadly, there is no focussed attention to managing either and she found herself lost and tied up in an endless circular roundabout and not getting anywhere, neither moving forward nor back ... echoes of the actual situation. Perhaps Marigold could enter the dreamscape fray for us all again and keep trying to persuade and direct better national management of these two crucial issues in that additional psychic realm. It is an inspired holistic approach. Thank you for your efforts, Magpie